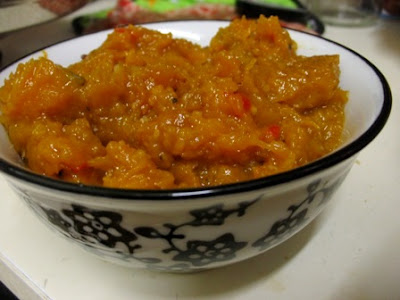 In hindsight it seems fortunate that I made some pumpkin chutney before we went to Philip Island a couple of weeks ago. At the Cowes Trash and Treasure I bought 500 Recipes from Australia by Marguerite Patten which was written in 1965 (See photo in my solstice cake post). It seems that older cookbooks are the best place for advice on preserves but they can be a little scary too.

Marguerite gives some rules for making chutney. She advises that malt vinegar is best (these were the days before an awareness of gluten-free diets), that the pan should be uncovered because chutney thickens through evaporation, and that the right proportions of sugar and vinegar is important for preserving the chutney. There is also advice about not bottling chutney in jars where the metal is uncovered and using aluminum rather than copper, brass or iron pots.

I was glad not to have read this before I started meddling with ingredients in chutney on a whim. I saw a Gingered Pumpkin Chutney recipe in Denis Cotter’s Wild Garlic, Gooseberries… and Me. It was quite simply spiced with ginger, coriander and fennel. I also have a Nigella recipe 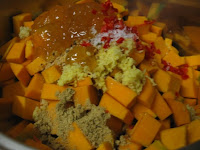 for Spiced Pumpkin Chutney which uses mixed spice, cloves and ginger. But I wasn’t quite convinced these were the flavours for me. A quick search of the internet found that cinnamon, cloves, and ginger were quite common. The recipe that grabbed me was flavoured with mustard, cloves, ginger and apricot jam, although I made a few changes.

It was quite simple to make. Both Denis and Nigella really just simmered all the ingredients together. But this recipe didn’t make as much, which I like. I also didn’t add the onion as I worry sometimes that it adds an odd flavour to chutney. I did look in amazement at the instructions to simmer for 45-60 minutes. Pumpkin usually cooks so quickly that this seemed wrong. But it did really need this time on a low heat. Denis says to simmer til thickened. Nigella says to cook til thickened but the pumpkin not soft. I disagree. The pumpkin should melt under a knife. Mine was cooked but not as soft as I would like it.

So while I am confessing to not following a recipe and probably failing in Marguerite’s eyes, I might as well admit to not being a domestic goddess lately. I broke two of my favourite sunflower bowls on the weekend while washing up. And I have made a few meals I thought I might blog but they just didn’t turn out as I’d hoped.

One was smoked tofu and bean burgers which Lysy posted. Since I have seen this post, all smoked tofu has disappeared from Melbourne and so I thought I could try it with firm tofu and 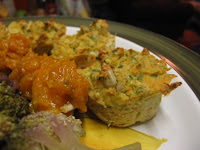 some liquid smoke but it didn’t work. The taste wasn’t quite right and the texture was so soft that I baked them as muffins rather than burgers. Once Melbourne is over its smoked tofu drought I might try again.

The other meal which just was not quite right was a vegan lasagna. I tried a vegan cheese sauce from Dr Furhman and I foolishly followed the recipe and added half a cup of lemon juice. It was so tart that, for once, E’s suggestion of tomato sauce on lasagna sounded quite sensible.

But the chutney has rescued both these meals, as well as adding some zing to my Sicilian drowned broccoli. Its sweetness, with a little bit of acid, spice and heat, was exactly the thing to made amends to any failings in flavouring. But it is not just useful for fixing kitchen disasters. It also is delicious on toast with sliced cheese. Unlike many preserves, the vegetables are not sweetened beyond recognition so it feels a little healthy. But I don’t know if Marguerite Patten would approve.

Place all ingredients into a medium-large saucepan and bring to the boil. Simmer on a low heat for 45-60 minutes, stirring occasionally until pumpkin is quite soft and the sauce had thickened slightly. Add a slurp of hot water if it begins to dry out.

When chutney is ready, spoon into plastic tubs if you will be eating within two weeks - we have gone through at least half of it in a week. If you want to preserve it longer than two weeks, spoon into sterilised glass jars.

NB: I just ran my jars under boiling water because I am no expert at sterilising jars. Nigella suggests sterilising them in a low oven or a hot dishwasher but don’t use plastic lids. I think for preserving, that you should seal the jars while the chutney is hot but am not quite sure.

On the stereo:
Burial: Death in June
Posted by Johanna GGG at 21:41