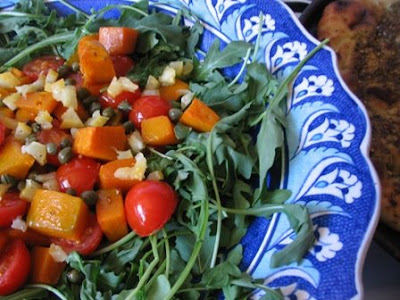 We went to the Slow Food City Marketplace last Saturday. It is part of the Taste of Slow Festival in Melbourne. According to Slow Food Victoria the slow food movement is more than the opposite of fast food. It is celebrating the local, the seasonal, the traditional. It is about sharing food, about food choices, about ethics. Indeed, this marketplace was full of friendly people and interesting food. It was also a visit of strange coincidences

The temporary ‘marketplace’ was a row of stalls by the river with an area set up with tables and chairs. It is always a pleasure to walk around beautiful displays of food, albeit a little overwhelming. We sampled Perry sparking pear wine from Henry of Harcourt, jams, chutneys, 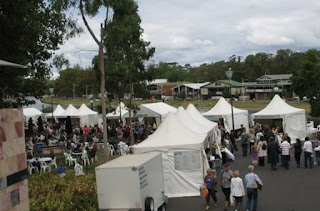 I enjoyed chatting to the stall holders. The most memorable conversation was at the CWA (Country Women’s Association) stall where I bought a comprehensive slices cookbook. We got chatting to a lovely old dear who was an avid viewer of detective television shows. She told us that she’d decided you would have to wear a space suit to commit the perfect crime to avoid leaving any DNA. She had a great sense of humour and it turned out that she had been born in the street where we live (strange coincidence 1).

There were stalls from all states of Australia. I was amazed to see dried dragonfruit on sale in the Northern Territory stall. I had only seen the fresh fruit for the first time a few weeks ago in (yes there is a photo of dragonfruit in my Darwin post – strange coincidence 2). It was purple and scaly like the wings of a dragon. The taste was less sweet than sultanas but not as tart as Australian dried apricots. Best of all was the chewy seedy texture. It is great in muesli. If they begin to sell dried dragonfruit regularly down here I will be first in queue.

One of the other stalls I enjoyed was the Culinaire (pictured). I bought some preserved lemons there and chatted about storing them (forever it seems) and was told they were easy enough to 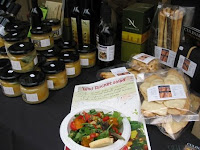 make myself (maybe one day). Best of all they sold a marvelous salad there, which I was told the ingredients were mostly from the Tambo River area of East Gipplsand. Any salad at these street festival events is quite unusual. A sublime inspirational salad is a rarity.

We sat on the rocky border of the garden and ate the salad with some of Tasmania’s Bruny Island cheese and pinot-marinated cherries and a cup of freshly made raspberry soda. (Strange coincidence 3 – on that same weekend my parents were holidaying at Bruny Island.)

I was so inspired by salad that when I was wondering what to make for the Waiter There’s Something in My … Salad, I decided I would attempt to replicate this one. It was unusual and would present an ideal opportunity to use some of my preserved lemons. I’ve never had preserved lemon before and find the bitter saltiness strangely appealing. I gather I need to rinse the salt off before using it – why didn’t anyone ever tell me this!

You can compare mine (in the blue bowl) to the photo of the one at the festival. Upon rechecking the photo, I found that I missed the roasted peppers and baby spinach but it was nevertheless 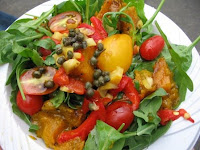 such an attractive and delicious salad. The sweetness of the pumpkin and tomatoes meld perfectly with the oily lemony vinaigrette (inspired by Vikki Leng) and the bitterness of the capers and preserved lemons. We had it after my Sydney Road bakery tour (this post coming soon) so I was happy for something light to have with the bread and dip I bought home. E loved the vinaigrette and was mopping it up with his bread.

I am sending to Andrew at Spitoon Extra for this month’s WTSIM which is seasonal salads (round-up here). All the vegetables are from our local Vic Market and this is a perfect salad for autumn which starts today.

Peel and deseed pumpkin and chop into chunks of 1 inch. Place in microwave for about 2 minutes and then scatter chunks in baking tray lined with baking paper. Spray with olive oil and roast in 180 C oven for about 25 minutes. (Alternately you can roast them in any method you are comfortable with.) Meanwhile halve cherry tomatoes and place in oven for a further 5 minutes with the pumpkin.

Make up vinaigrette by whisking all ingredients together (or shake in a sealed screwtop jar). Arrange rocket leaves around the edge of a large shallow bowl. Place warm pumpkin and cherry tomatoes in the centre and scatter with preserved lemon and capers. Drizzle vinaigrette over the top.

On the Stereo:Music of Burns (freebie from the Scotland on Sunday): Various Artists
Posted by Johanna GGG at 22:33