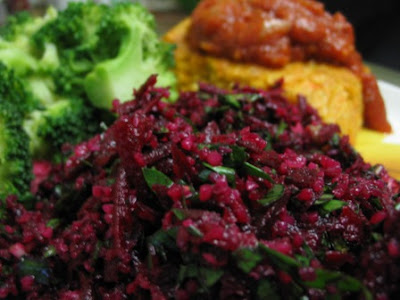 I have become enamoured of pomegranates over the last few months. I have discovered pomegranate molasses, pomegranate juice and I have finally tasted the ariels of the pomegranate. Pomegranates are everywhere - in the fruit displays at markets and supermarkets alike, in still life paintings and on book covers. I can’t tell you if it is a new fashion or my new knowledge that makes them hard to avoid. But I can tell you a little about their history and how it shows how women’s lives have changed over the centuries.

Pomegranates are known as the seeded apple, grenade, Chinese apple, poor man’s cranberry, food of the dead, wine apple. This enough shows what an interesting fruit it is. It is found in the bible, Greek mythology and the history of the royal families of Europe. Ironically it is a symbol of fertility and yet the pomegranate is portrayed in myth and history so often as being unkind to mothers - the effects of their pain rippled throughout the world.

My first encounter with pomegranate tales was reading, as a child, the myth of Persephone. When Persephone, daughter of Demeter (goddess of the Harvest), was lured into the underworld, it was her act of eating pomegranate seeds that condemned her to spend part of her 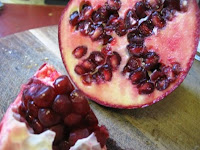 life there each year. The pomegranate caused such a deep grief in Demeter when her daughter went to the underworld that our world took on the barrenness of winter each year to reflect her heartache.

The next story I chanced upon about pomegranates come from Stephanie at an Elegant Sufficiency. She told the story of Henry VIII’s first wife, Catherine of Aragon who took on the pomegranate as her symbol – among their wedding gifts was a suit of armour engraved with roses and pomegranates. Then, as now, a King married to produce an heir. In 1510, Catherine gave birth to a stillborn daughter. She then bore two sons who died in infancy – one within months and one within hours of birth - and another stillborn daughter. Her next child was a girl, named Mary who lived to rule England briefly. Catherine’s final pregnancy resulted in a stillborn daughter. Henry, frustrated at the lack of a male heir and the Pope’s refusal to annul the marriage, remarried and proclaimed himself head of the English Church, thereby beginning the English Reformation.

Poor Catherine had experienced the deaths of 5 babies by the age of 33, and her husband wanted to escape the marriage so desperately that he would create a new church. She died in a 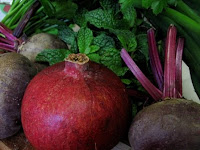 decaying castle, forbidden to see her only surviving child. What grief and pain she must have gone through. If I was her I would cursed the day I discovered the pomegranate.

After these stories I started looking for stories to illustrate why pomegranates were seen as symbols of fertility, but found these thin on the ground. Wikipedia pointed me to another figure of Greek mythology who had the pomegranate as an emblem – Hera. She was the wife and older sister of Zeus and goddess of marriage. Although she was a mother herself, there are many stories of her anger and violence towards childbearing women and their children. In various stories she is seen kidnapping the goddess of childbirth, plotting to rip a baby apart, murdering children, and tying together the legs of a pregnant woman to prevent childbirth. She wouldn’t be my ideal dinner guest! And she doesn’t do the reputation of the pomegranate any favours.

Continuing the theme of unhappy mothers, Wiki also reveals that the Virgin Mary is sometimes portrayed holding a pomegranate. Here again is an association with a mother who knew pain. She saw her son Jesus branded a criminal, publicly humiliated and dying an agonizing death.

Finally I turned to Jane Grigson who calls it an ‘unrewarding fruit’. She points me to another queen who took on pomegranate as her emblem. Anne of Austria had a series of miscarriages and sixteen years of childlessness. However this story has a happy ending. In 1638 at the age of 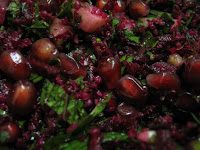 37, she finally had a son, King Louis XIV of France, known as the Sun King. Under his rule, France had military victories and cultural accomplishments, not least of which being his dazzling palace at Versailles.

To be fair to the pomegranate, it can’t be blamed for all the maternal woes. I started to look at other kings and queens and was surprised to see that stillbirth and infant death was quite common. Today it is not as common. Back then, maybe anything as simple (and expensive) as pomegranates that might help your children survive was welcomed. If you want some insight into the history of childbirth over the past century that have contributed to improvements in women's lives, I would recommend Janet McCalman’s history of the Royal Women’s Hospital in Melbourne, Sex and Suffering.

If you want to just celebrate women’s lives, then you could do worse than to make this beetroot and pomegranate tabbouleh that I made on International Women’s Day. I was pleased it was purple and green. The colours of our suffragette foremothers. Purple for passion. Passion comes 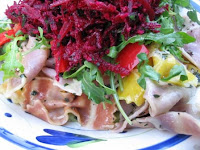 from the Latin for patior meaning to suffer or to endure, but in our case maybe it means the good fight. Green for hope of a better life as well as the hope that our past struggles will not be forgotten.

Beetroot and pomegranate tabbouleh is a salad I am sure I have seen elsewhere but the recipe was not to be found again. So I looked up some tabbouleh recipes such as I’m in season, Kalyn’s information and my own green tabbouleh to give me guidance in this recipe.

I think I might have underdone the bulgar wheat and overdone the pomegranate molasses and lemon juice. The tabbouleh had a strong tangy taste but this was a fine accompaniment to a little 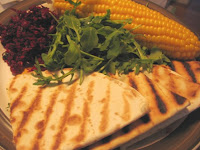 nut roast or pasta or cheese quesadillas. The herbs gave it a fragrance and colour that pleased me. I was a little disappointed that the jewel-like pomegranate ariels weren’t more prominent against the beetroot but their sweet juicy explosions were a nice contrast to the tang. The seeds in the ariels had a little crunch as well which surprised me. Yet I love the refreshing juice and the beauty of the ruby ariels. I’m looking forward to cooking with pomegranates again despite its history of broken promises.

Beetroot and Pomegranate Tabbouleh
Serves 4-6 as a side dish

Pour hot vegetable stock over bulgar wheat in a medium sized salad bowl. Cover (I just used a dinner plate) and sit for 10 minutes so the wheat absorbs the liquid. Add remaining ingredients and toss.

On the stereo:
Soliloquy for Lilith: Nurse with Wound
Posted by Johanna GGG at 21:31