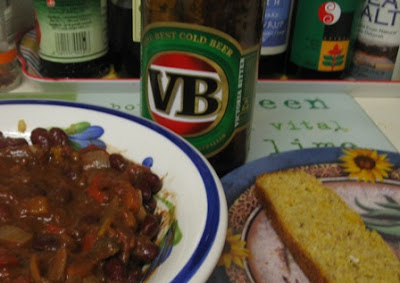 I have made many chilli non carnes in my lifetime but this blog has got me out of a rut and trying different recipes. My favourite discovery is the addition of cocoa for the dark slightly sweet and bitter edge. But I have long wanted to try the lager chilli and jalapeno butternut cornbread that Cassie seems to enjoy regularly on Veggie Meal Plans. I don’t drink a lot of beer but I love it in a stew or a bread.

This chilli non carne recipe included lager and cocoa so I knew I’d love it as much as Wendy. I followed the recipe pretty much but added more vegetables. I omitted the chilli powder but because this was my chance to use the cute but fiery red chilli peppers that my friend Penny 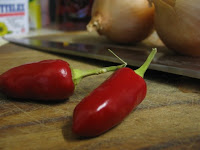 gave me. The chilli non carne was an excellent combination of fragrance, flavours and heat.

Chili and cornbread is a classic and comforting combination. I loved the idea of Cassie’s cornbread with pumpkin and oats. It seemed like the perfect way to use up my leftover egg from glazing my pot pies. Egg is a necessary evil for me. I like the effect it has but I hate leftovers. I dislike the omelettes, scrambles and other ways people seem to use up eggs. I avoid recipes that use only an egg white or an egg yolk because I then have to work out ways to use the other half. If I was more organised I would freeze them like Haalo and use them for elegant plum friands.

So imagine my disappointment to re-read the recipe at lunchtime and remember that Cassie is vegan. Then I got home and found E had used all the milk this morning (I know it is not vegan 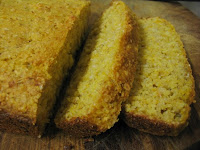 but at least it feels an easy swap with soy milk). So I used the rest of the buttermilk and my leftover egg. But I loved this bread so much that I will try it vegan some time. It is moist and full of flavour. And the recipe made me think of some cultural differences that intrigue me in blogging apart from the term chili.

As I have discussed before, when I lived in the UK, pumpkins were as scarce as hen’s teeth. Now I have noticed that in America so many people seem to use pureed pumpkin from a can. I don’t know if you can even buy it in a can here in Australia but there are always large wedges for sale in any market or supermarket. I have found that it is quite easy to cut it into small chunks, put it in the microwave a few minutes in a plastic container and use a fork to mash it up. So simple it makes me wonder why it needs to come in a can. But I recently saw Ashley saying she wished for a pumpkin recipe that uses a whole can when baking her wonderful pumpkin pecan raisin muffins. Yet there are so many uses for pumpkin. It is excellent in chocolate cakes, scones or stews. I had a little of mine leftover from the bread and remembered a friend’s mother had told him that pumpkin will thicken a stew so I put my leftover in the chilli non carne.

The other cultural difference that made me curious was Cassie putting a bottle of lager in her recipe. (Actually she called for 2 but I halved the recipe.) How big is a bottle? Does she mean a stubby (375ml) or a long neck (750ml). I have assumed the former but I did wonder what is

standard for a bottle of lager in America. I used one of our old-school and misleadingly titled Melbourne lagers that I drank too much as a student – Victoria Bitter. According to Wikipedia it has the highest market share of all beer sold in Australia but I don't drink it often these days. It does however make an excellent chilli non carne.

I am sure that Jeanne at Cook Sister will appreciate this fine chilli non carne. She is hosting this month’s Waiter There’s Something in My … Pulses and is welcoming all recipes with beans, lentils, chickpeas and legumes of all varieties.

Heat oil in a stockpot over medium heat. Add onions, carrots and peppers and cook until softened. Stir in garlic and chillis and cook for 1 minute. Add spices and stir (I did this off the heat). Add tomatoes and lager and bring to the boil. Add beans and remaining vegetables. Bring to the boil, cover and simmer for 20 minutes, stirring occasionally. Remove and discard cinnamon stick. Simmer, uncovered, approximately 10 minutes, or until chili is to desired thickness. Season.

Preheat oven to 190 C. Grease and line a loaf tin.

Place dry ingredients in a medium mixing bowl and mix. Add wet ingredients and stir til just combined. Spoon batter into prepared loaf tin and bake for 25-35 minutes or until a skewer comes out clean. Sit a few minutes and then turn onto a wire rack to cool.

On the stereo:
The Best of: Don McLean
Posted by Johanna GGG at 00:06