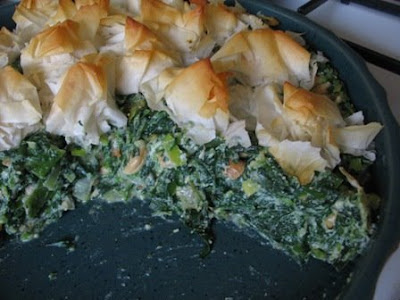 I wanted to make this pie on Thursday night but it was too hot – at 6pm it was still 37 C! We had soup from the freezer instead. It was hot again yesterday – 40 C. Ideally I would just live on salads and burgers or vegie sausages when it is so hot. But I have been wanting to make this pie for ages and had the ingredients. E was pleased because he wants a hot cooked meal every night no matter what the weather – you can take the boy out of Scotland but you can’t take Scotland out of the boy!

First instruction in the recipe was preheat the oven. Gave me a laugh. If I must use the oven in this weather, any inclination towards preheating goes out the window. It makes me remember being 15 years old and moving house. We went from a kitchen with an electric oven to one with a gas oven. My mother was delighted and told me that I could bake any time I wanted now 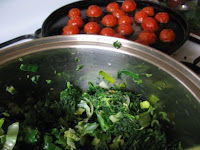 because we didn’t need to preheat the oven. Ever since I have been of the notion that gas ovens don’t really need preheating. I have included preheating in the recipe and often do in other recipes but I don’t always preheat. Especially when it is swelteringly hot.

This pie does have a bit of a summery green feel to it. It is a little like spanakopita but isn’t packed with salty firm fetta, so the spinach and leeks are more of a feature. The filling is quite moist and creamy with the additional nuttiness of cashews, and the fresh flavours of tomatoes and basil.

The best thing about this pie is the pastry. If like me, rolling out pastry makes you want to screw it up in a ball and throw it in the bin, then this is a pie for you. The topping actually does involve 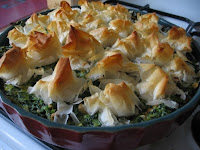 screwing up filo pastry in a ball. In my more poetic moments, it reminds me of pastry roses. But the effort is so minimal that you would not work up a sweat. Suits me on a hot day.

Luckily by the time we ate, the cool change had come and we could eat dinner outside. Sadly being outside in the refreshing breeze meant I forgot to turn off the oven and it took quite a bit longer for the house to cool down.

Preheat oven to 190 C and bake tomatoes for about 10-15 minutes. (The tomatoes shouldn’t be too soft because I think I overcooked mine this time and they were less noticeable in the pie.) Cook spinach in large covered pan 2-3 minutes til wilted. Drain and squeeze excess liquid. (I defrosted 500g frozen spinach and just drained most of the water off).

Gently cook leeks (I used 1 leek and most of a bunch of spring onions) and garlic in oil til soft – about 3-5 minutes. Add spinach and basil and stir til combined. Remove from heat and add ricotta, parmesan, eggs, cashews and stir. Gently stir in tomatoes last. Season. Spoon into a 25cm ovenproof dish.

Cut filo sheets into 4 squares each. Spray each square with oil spray and scrunch up like a rose (or a piece of paper you are about to throw in the bin). Place on pie. Repeat with remaining filo til you have covered the pie. Bake for 20-30 minutes until pastry is golden brown. It is good served with sauce or chutney.