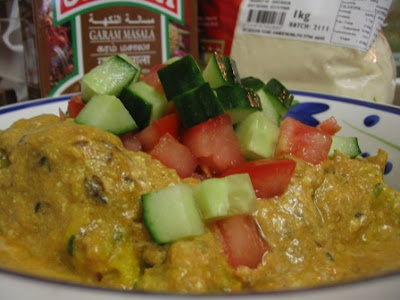 When I lived in share households, I sometimes was inspired to make an effort with curries, although I think it was housemates with a finer appreciation for chilli than me who made the most curries. These days I am a bit lazy and occasionally make dahl or a curry when I just throw in some standard spices (tumeric, cumin, coriander, chilli) or even lazier and throw in a jar of curry paste. E calls it Rob’s Slob Curry after a curry in a student cookbook. We are spoilt for excellent Indian restaurants in Melbourne so if I need good Indian meals I can eat out (although nothing as good as the Empress of India in Peebles, Scotland).

But recently, I’ve been seeing some wonderful Indian recipes on other blogs. I am shamed by my lack of efforts and decided this is an area where I must try harder. There are a few reasons I 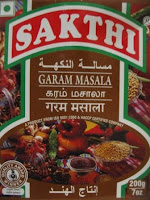 have avoided these sorts of dishes. I am not a chilli fiend, I have often not had all the ingredients required, and I find the vegetable curry recipes often focus on only one or two vegetables, rather than the rainbow I like to see on my plate.

So, you see, when it comes to interesting Indian food, I am out of my comfort zone. I see words that are English but they still aren’t my language. While I mean something quite smooth, brown and salty (but not spicy) when I say gravy, Indian cooks seem to refer to any sort of sauce as gravy. I still am getting my head around tempering (what is it?), urad dahl and all the other dahls that go by unfamiliar names (I think Charmaine Solomon has been the most helpful in explaining this) and the grinding masala.

But I am intrigued by the recipes and I want to learn. I was inspired by koftas in gravy that Mansi cooked recently. But I still had a lot to get my head around. Firstly, I checked with Mansi about the garam masala she used. When she said it tasted savoury not sweet I knew I had to find a decent spice mix.

I have never liked the insipidly sweet garam masala they sell in supermarkets. In one of my share houses, my housemates made garam masala which opened my eyes to how good it can be. I don’t know where that recipe came from but a quick search on the web will give you quite a 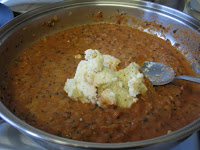 few (try about.com, o chef, or if you really want to be overwhelmed check out the 50 versions on Food India) Food India tells me that Garam means hot and masala means spice, and that the mixtures are vary from region to region. They also advise that garam masala is usually added towards the end and warn too much can overpower a dish.

Making garam masala was a bit much for me so I headed off down Sydney Road to a local Indian supermarket. The ingredients are as follows: coriander, chilli, aniseed, cloves, cinnamon, garlic, staranise, cumin, pepper, nutmeg, 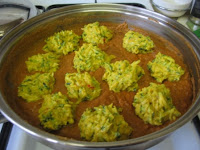 cardamom, curry leaf, ginger, tumeric, salt, refined groundnut oil. It smells so fragrant and was surprisingly hot. My reading tells me it only lasts a few months. This box was huge so I have given half to my mum, and I am sure I will still struggle to use it up.

A good garam masala makes a difference, especially in a recipe where it is used generously. Nevertheless, making the koftas in gravy, I felt all thumbs. My timing was all wrong and there wasn’t enough water in the gravy. I wrote myself quite a few notes and waited til I was able to try it again to be confident enough to post about it. 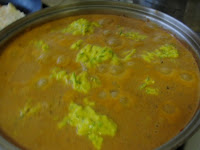 This is the sort of Indian cooking that interests me. I felt quite proud to make something that looked like it might come from one of the local Indian restaurants. The gravy is fragrant and spicy. The wonderfully yellow koftas are a great contrast in texture as well as colour. And I bought great roti from the Indian minimart instead of the supermarket to eat with the koftas.

I strayed from Mansi’s recipe a little – and have altered the instructions to help me. I used zucchini rather than bottle gourd because I have never come 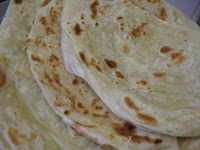 across the latter and I love zucchini. The second time I made it I was more generous with adding water to the gravy and used yoghurt rather than cream, as I tend to have the latter about the kitchen more. The gravy was still quite thick especially with the leftovers the next day, but I have one photo of the first batch with the thick gravy for you to compare to my more watery later one - the koftas in the first are neater but don't have enough liquid. Needless to say, I used less chilli. Even so, Mr Tabasco Fiasco himself told me it was very spicy. Spicy but delicious!

* This recipe can be easily made vegan by using non-dairy substitutes.

Before you start on the gravy you should do the following preparation. Grate the zucchinis and use a sieve or colander to press out as much water as possible (Mansi says this is so koftas don’t break up in the gravy). Place onions and garlic in blender til they are finely chopped (Mansi says a smooth paste but finely chopped worked for me). Stir 2 tsp of water into ground almonds to form a very thick paste (it will look like it is too dry to make a paste but continue to press together with the back of a spoon).

To make the gravy: Using a large frypan with a lid, fry the cumin seeds in oil til they start spluttering. Add onion-garlic mixture and fry for about 5 minutes. Add garam masala, tomato puree and salt and stir into onion mixture. Add milk gradually, stirring constantly. Add almond paste and mix into the gravy. Add 1-2 cups water. Cover and simmer on low flame (I think this should be for 10-20 minutes).

While gravy is simmering, make the koftas: Mix the drained zucchini, tumeric, chilli and salt to taste, almonds and besan. Add lemon juice to taste. My batter was like a thick cake batter. I added more besan than Mansi and it was still very sticky.

Check the gravy is quite thin. If not, add some more water. I formed small golf ball sized koftas with the batter and dropped them in the simmering gravy (or just drop in spoonfuls if you don’t have time to form koftas). The gravy should be on a low flame while the koftas are cooking. Cover and cook for 3-5 minutes. Then gently turn koftas over. Add cream or yoghurt to the gravy and gently stir to mix. Cook koftas another 3-5 minutes.

Lift koftas into serving bowls and top with gravy. Garnish with coriander and slivered almonds (or with fresh chopped tomatoes and cucumber) and serve with chappatis, roti or rice.

On the Stereo:
This is Hardcore: Pulp
Posted by Johanna GGG at 23:03