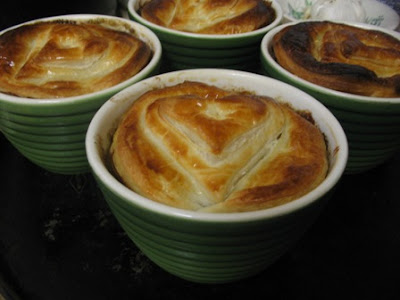 There have been whispers of cupcakes taking over the world but it seems they wont do so without a fight. Ann and Karyn have declared war on cupcakes with the Mini Pie Revolution. These ladies are serious. They have written a manifesto and are storming the barricades. Each month they hold an event where bloggers make mini pies and yell ‘Vive La Revolution!’ (If you check the banner picture on the website, you might be forgiven for thinking these mini pies are then used in place of cannon balls to be shot at the cupcake makers!)

I have wanted to join in but me and pastry don’t get on very well. Scrunching pastry in a ball is more my scene than rolling it out. I don’t think I have one proper pastry recipe on my blog. You would think I have never made pastry before. I have and I will again but it really is not my thing.

This month the mini pie ladies have called for mini pot pies. I felt inspired to try a Farmhouse Pie recipe that my housemate Will used to make. I have tried it before and failed miserably. In 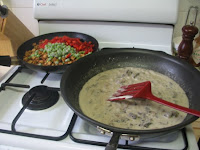 fact, I have even written on the recipe to suggest that I make the filling and serving it with a baked sheet of puff pastry! But I felt that if I did it in a ramekin with just a top then it just might work. I went to the freezer and found my packet of puff pastry had sat there so long it had gone off! I really am not a pastry person.

I bought more puff pastry, I made the pies, and then I re-read the guidelines. It said that these pies were to be made from scratch. They want me to make my own pastry? Too late for that. It is just like reading the recipe properly after I have made dinner (which I have been known to do – and to prove it I just realised I forgot to add the stock powder to the water when making these pies - oops). 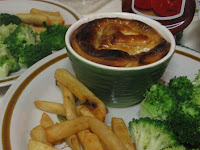 proper pastry pie and will accept my humble pie to encourage me to make better (if not bigger) pies.

E and I really enjoyed our pies anyway. The weather has suddenly gone so cool that we turned the heater on tonight. Perfect for pies. This is a creamy pie that Will adapted from a Farmhouse Chicken Pie recipe. The tempeh tastes great in it but 'Farmhouse Tempeh Pie' doesn’t have the same ring to it. Have you ever been to a farm and seeing little tempehs running in the yard? The ramekins made doing the pastry so much easier and I had fun with some heart-shaped cutters that I bought in Darwin last month.

or lasagne cooked in a little dish on a plate with chips and vegies. I couldn’t resist doing chips and vegies for a laugh. It suited me, as I am trying to clear some of the lurkers from my freezer (the chips were hiding in the back with the pastry!). But to eat it, we scraped the pies from the ramekins as I have never understood how you are meant to eat from a little dish with a knife and fork. But when faced with pastry, E’s love of tomato sauce makes sense. And despite my aversion to cooking with pastry, I can easily understand why pies have long been good hearty winter fare.

Heat oil in a large frypan and fry tempeh til starting to brown. Set tempeh aside.

While the tempeh is frying, place a ramekin upside down on a square of pastry and use a small sharp knife to trace a circle around the ramekin. Repeat so that you have 4 circles of pastry that will be the pastry lids for the pies. Preheat oven to 210 C.

Melt butter in the large frypan and fry mushrooms for a few minutes til butter is absorbed and the mushrooms are starting to release their juices. Sprinkle with flour and stir for 2-3 minutes over low heat. Add liquids and stir until mixture boils and thickens. Stir in tempeh, capsicum, peas, cheese and parsley. Remove from heat.

Spoon filling into 4 ramekins. I didn’t grease these and the filling didn’t quite reach the top. Place a circle of pastry on top of the filling in each ramekin. Use leftover pastry (or a second sheet) to decorate the pies. Make a hole in the centre of the pastry for the hot air to escape. Brush pastry with beaten egg. (I brushed it and then added pastry decorations and then brushed it again).

On the stereo:
Early Morning Hush: Various Artists
Posted by Johanna GGG at 23:18