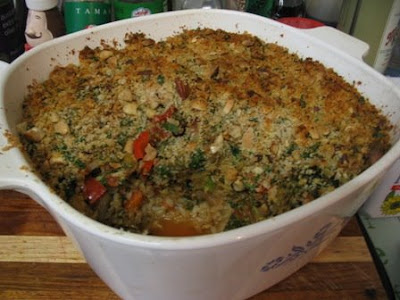 When I asked E what he wanted for dinner tonight he asked for something with rice. So I decided to find an old favourite recipe from one of my first vegetarian cookbooks which of course was produced by the Australian Women’s Weekly.

I had been thinking of cooking something for Meeta’s Monthly Mingle. This month the theme is one dish dinners. It made me reflect on how my cooking style has changed. I used to be a one pot cook. If I couldn’t throw it all in one pot then it was too complicated. These days I struggle at the idea of having dinner in one pot because I want more vegetables. Often I made a salad or steam some vegetables so their taste is fresher and not hidden under a heavy sauce or swamped by carbs.

But Meeta has made me think I should resurrect some of the good one pot meals I used to make which have fallen by the wayside. (After all I don’t want to throw out the baby with the bathwater!)

This dish is great because it is so satisfying. It has all the elements of a meal in a casserole dish. Rice on the bottom, vegies in the middle and lots of proteins on top. The flavours are quite simple but it works. I was a bit unsure if by one dish dinners, Meeta 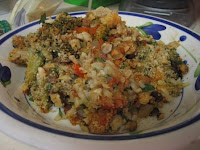 meant that only one dish was to be used in preparation or one dish was to be served out of. This dish doesn’t fit the former but it fits the latter. What I love about dinner being served from one dish is that it can be prepared ahead or served up as leftovers without any extra effort.

Oh and not only am I not sure it fits the theme, but it is a day late – hope Meeta will still accept it! But I hope she might include it as it is a great recipe that I would recommend – I even got to make dessert while the crumble was cooking. Stay tuned for that one!

Place brown rice and stock cube in large saucepan of boiling water. Simmer for approximately 30 minutes or until rice is cooked. Drain. Mix rice and egg. Spread in the bottom of a 2 litre dish (mine is about 22 x 22 cm square - update June 2014 - made this again and found a larger rectangular lasagne dish worked better).

While rice is cooking, fry onions in oil for 2-5 minutes over medium heat. Add chopped vegetables, tin of tomatoes, parsley and herbs. Bring to boil and simmer for 7 minutes or until vegetables are just tender. Spoon vegetable mixture over rice.

To make crumble, mix all ingredients together in a small bowl. (Note: I found that I had a lot of crumble mixture and felt I could have used less but it did taste good.) Sprinkle vegetable mixture with cheese and then spread crumble over vegetables and bake in moderate oven for 20 minutes or til crumble is golden brown.

NOTES: Update April 2014 - made this tonight with carrot instead of cauliflower and kale pesto instead of parsley and herbs in tomato mixture (and no parsley in crumble topping - also sprayed with oil spray as well as mixing olive oil through).  Made it vegan by replacing egg in rice with 1 tbsp chia seeds and 3 tbsp water, and using Daiya vegan cheese.)  Also used 3 cups cooked brown rice mixed with 1 tsp stock powder rather than cooking rice in stock.)

On the stereo:
She will have her way – the songs of neil and tim finn: various artists
Posted by Johanna GGG at 23:14