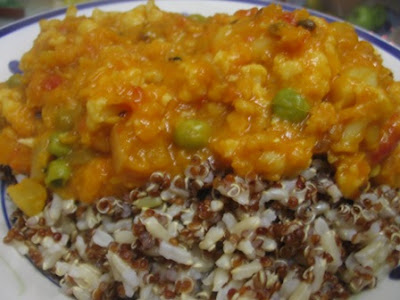 Susan wanted to sing from the hilltops like Julie Andrews. Michael and Cindy agreed with her raving. So I expected great things from Susan’s Cauliflower Dal with Panch Phoran. I had this dahl in mind when I purchased a packet of Panch Phoran (or Panch Puran as my packet says) from a local Indian grocery store.

Panch Phoran is a mixture of mustard, cumin, fennel, fenugreek and kalonji (nigella) seeds in 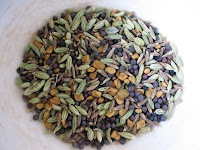 equal measure. I thought this must be a fairly authentic Indian flavouring. But Wikipedia tells me that in Bengal, ‘the cradle of this mixture’ radhuni would be used in place of mustard seeds.

I find that spicy sludgy dahl is a great comfort food. It feels like the Indian equivalent of baked beans. This new spice combination interested me as a way of reinvigorating an old favourite. The seed mix is a pretty one with different colours and shapes. When I opened the packet I was hit by a heady fragrance that really was a change from the spices I habitually use. The liquorice smells of fennel and fenugreek were particularly powerful, possibly because these are spices I don’t use much.

When I tempered the seeds (which I have just discovered is when you fry them in ghee or oil until they start to pop) the smell was fantastic and had much more depth than just liquorice. I was really looking forward to this dahl. Unfortunately, once I had simmered the lentils and vegetables, the fragrant spices had faded into the background and I found this dahl to be a little on the bland side. E doused it with Tabasco sauce.

I was a little disappointed. Possibly it was because I neglected to follow Susan’s instructions and cook the lentils separately. It seemed a waste of another saucepan but maybe would have made

sure more of the panch phoran flavour was imparted. I also added a few extra vegetables but I don’t think this would have made much difference to the spices. The recipe also required being a little prepared rather than chopping as I go, which is my usual way! A little more experimenting is in order, I think as I want to be able to taste these wonderful spices.

Not only was I cooking with an unfamiliar spice mix but I was also baking Ricki’s quinoa muffins against the clock while the dahl cooked. Why? Because it was earth hour when everyone was encouraged to turn off their lights at 8pm to raise awareness of global warming. I didn’t want to be cooking by candlelight so I was racing to have the dahl served and muffins in the oven by 8pm. I served dinner and managed to take a picture of the meal at 7.59pm. Then we sat and ate our dahl with rice and quinoa by candlelight.

Rinse the lentils and place in a saucepan with 4 cups of water and tumeric. Bring to the boil and simmer on low for 20 minutes or until tender. Add salt and set aside. (I did the lentils, water and tumeric with the vegetables but do not advise this as maybe this was why the spices didn’t shine.)

While the lentils are cooking, prepare the vegetables. Heat a large stockpot and add oil. Add panch phoran and stir til the seeds start to pop (this is the tempering). Add onions and ginger and fry 2 minutes or til onion is starting to soften. Add chilli paste and garlic and fry 1 minute. Add the tomatoes, cauliflower, pumpkin, peas and ½ cup water, and stir to coat vegetables with spices. Cover and cook for 10 minutes or until the cauliflower is just tender.

Add cooked lentils to the cauliflower mixture. Stir well, and add further seasoning if required. Simmer gently for about 10 minutes to allow flavors to blend. I served mine with a mix of brown rice and quinoa and highly recommend this.