St Patrick, Soup and a Shamrock 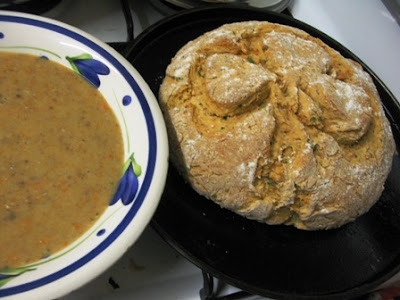 I love celebrating St Patrick’s Day. It has always been a great excuse to eat and wear green. But it is more than that to me. It is part of my heritage that I can proudly claim.

I have many Irish ancestors, especially on my mother’s side. I was named after my maternal great grandmother whose parents migrated to Australia from Ireland. I went to a high school run by the Brigidine nuns and we learnt about hedge schools in Ireland that were run to educate the population in spite of the English. Each year on 17 March we were taught about St Patrick bringing Christianity to Ireland. As a university student I discovered the joys of green beer on St Patrick’s Day. It made me very happy until I learnt that it was made by putting some food dye in the beer and is not popular in Ireland.

But I still enjoyed the excuse to eat green and hold green dinner parties. We had green soup, green lasagne and an amazing green cake with a figure of St Pat driving the snakes into the sea. 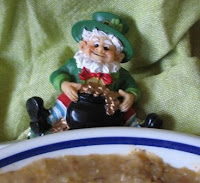 (Creative credits to my house mate Yarrow.) Then my brother and sister moved to Ireland and I would hear their tales of the grand green celebrations in Dublin each year. If you want to see how creative people can be with a bit of food dye, check out Susan’s shamrock shake, Glenna’s green bread, Cakespy’s green soda bread and Cakelaw’s green cupcakes.

This year, rather than a burning desire to celebrate with green food, I wanted to make a soup that I came across last year which was called St Patrick’s Soup. For month I planned to make it on 17 March to celebrate St Paddy’s feast day. As the day drew closer I thought that the perfect accompaniment would be soda bread. But the best laid plans of mice and men often go awry.

I didn’t count on the heat wave that left me with little energy for cooking, especially anything that required turning on the oven. Then I spoke to my mother who said she was confused about when St Patrick’s Day was this year. According to this article the Catholic Church has declared that St Paddy’s day is to be held on Friday 14 March this year because Holy Week is too sacred for such celebrations. My mum also told me that Easter occurs on the first moon after the solstice, and this year it is especially early because the full moon occurs on the solstice – apparently it wont happen again in our lifetimes so we will not have to face this quandary again.

I will never understand the mysterious ways of the Church! But I was actually pleased that I had made a green pie on this year’s temporary St Patrick’s Day. The Church’s decision freed me from a need to adhere strictly to dates and so I set about making my St Patrick’s Day meal on 18 March. (Close enough for jazz!)

My St Patrick’s Day meal was fine hearty stodge that one of my friends would call Bog Irish. The soup is quite simple but smells wonderful with the pinch of cloves. It is thick and porridgey with

lots of oats and the sorts of vegetables you might find growing in those green Irish fields. It is truly nutritious and comforting. The sweet potato version of soda bread doesn’t seem so Irish but it is my favourite soda bread recipe. It has a pleasing orange tinge, great flavour and is wonderfully moist.

A challenge presented itself when I got home around 7 and read the instructions and remembered that the bread requires roasting the sweet potato for 45-60 minutes before you start baking. (I might have done it the day before if it wasn’t the hottest March night on record with a minimum temperature of 27 C.) Of all the times I have made this recipe, I think I might have been organised enough to roast the sweet potato only once and it did make a difference but if you aren’t organised a quick bit of microwaving or steaming will still taste great. I also had a good laugh at the requirement to cool the soup before blending. As if I had the time or the patience!

My timing was all out, I was tired and I faced more disaster after I put the bread in the oven. It was only then that I discovered that in my haste I had added plain flour rather than self-raising 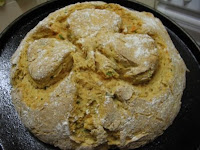 flour when rushing to refill my flour containers. Luckily the bicarb of soda worked its magic all on its pat malone and the bread still was delicious.

I made the bread look more Irish by scoring the outline of a shamrock with a knife. I think we all know that St Patrick taught the Irish pagans about the mystery of the Holy Trinity by using the shamrock to explain three in one. But I have been thinking that maybe if he was a cook he might have used a recipe to explain how individual ingredients come together into one delicious dish.

1. Melt the butter or margarine in a large stockpot. Add the onions, potatoes and carrots and fry gently for about 5 minutes until soft. Add the mushrooms, cabbage and ground cloves and cook a further 5 minutes.

2. Add the vegetable stock and oatmeal. Bring to the boil, then cover and simmer for about 20 minutes. Make sure you stir occasionally as the mixture will thicken as it cooks and stick to the bottom of the saucepan.

3. Puree with a hand held blender until the soup is smooth. (If you prefer a slightly chunky soup, just puree half the mixture.) Season to taste. Serve with a swirl of cream if desired.

Preheat oven to 180 C. Bake kumara whole for 45-60 minutes. (Alternatively, if time does not permit, microwave or steam kumara in thick slices til soft.) Cool slightly, peel and mash – a fork will do the trick. Measure one cup and set aside. If you have leftovers it tastes great in a sandwich with cheese and chutney.

Sift flours, bicarb, salt, sugar and nutmeg (if you have the time and inclination). Rub the butter in with your fingertips til the mixture resembles fine breadcrumbs. (You can do this in the blender but I find this quite a relaxing activity to do the traditional way.)

Use a fork or whisk to mix buttermilk and egg in a separate bowl. Add sweet potato and chives and mix well. Make a well in the flour mixture and pour in buttermilk mixture. Mix til dough becomes smooth but do not overmix. Towards the end of the mixing I find it helpful to use my hands and I give a quick knead on a floured board.

Form dough into a flattish round of about 4 inches thick and place on a lightly floured baking tray. Use a blunt knife to score lines to make 6-8 wedges or make the outline of a shamrock if you want to make it feel a bit more Irish. Lightly dust with flour.

Bake approximately 45 minutes or until a skewer comes out clean. Serve warm with soup. Will last a few days, although you will probably want to gobble it all up immediately. Is excellent with promite or cheese and chutney.

On the Stereo:
Cara Dillon: Cara Dillon
Posted by Johanna GGG at 23:01