PPN #54 The Princess of Pastas 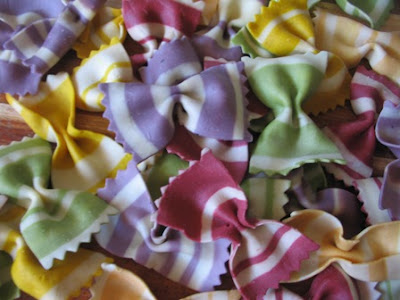 I found the prettiest pasta in the Mediterranean Supermarket in Sydney Road last week. When I saw the pasta one of my first thoughts was just how wonderful it would be to share photos of it on the blog.

This type of pasta is called ‘farfalle’ which is Italian for butterflies, but it is also known as 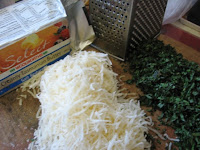 bowties. I have had it often but never striped and coloured like this. The pasta I bought was imported from Salerno. It is coloured with red beetroot, spinach, blueberries, tomato and curcuma (which I was told is a close relative of saffron). I had to get some of the ingredients explained and I was relieved there was nothing like the squid ink that is in some of their other coloured pastas.

I knew I needed something simple to feature the pasta. I remembered a mint and parmesan pasta recipe that I had written down years ago with the fantasy of an overflowing mint garden 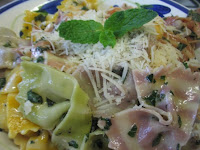 (which will probably never happen). The recipe is so simple it is embarrassing. I am not usually one to add lots of butter to pasta but this farfalle is a bit of a princess and seemed to demand only the best.

The blogger I know would love this stunningly simple and downright delicious recipe is Ruth of Once Upon a Feast who holds Pasta Presto Nights every week and is most appreciative of everything pasta. So I am sending this to Ruth for this week’s round up.

Cook pasta according to packet instructions so it is al dente. Save about a cup of cooking liquid. Place chopped butter into the drained saucepan which you cooked the pasta in (it will melt in the hot saucepan). Add the cooked pasta, mint and half the cheese and toss. Add a bit of cooking liquid, as required. Taste and adjust seasoning. Serve scattered with the remaining cheese.

* I actually cooked only 200g of pasta for the two of us and was a bit lackadaisical with quantities of butter, mint and parmesan. I have reproduced the original quantities but suggest you adjust as suits you because it is quite flexible. You could reduce the butter and add more cooking liquid if you wanted less fat. I served the pasta with beetroot and pomegranate tabbouleh and a green salad.

On the stereo:
Affenstunde – Popol Vuh
Posted by Johanna GGG at 18:12