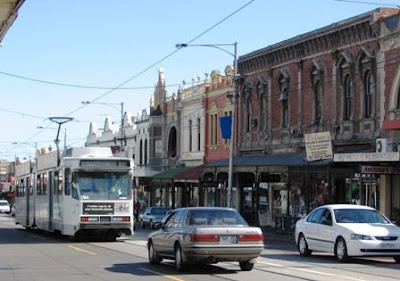 In summer all the old men, they sit on their front porches,
While the women comb their hair, shell their peas,
And wonder what they’ve missed.
(Brunswick by Weddings Parties Anything)

Melbourne feels like the city of festivals at the moment, and Sydney Road has been enjoying the buzz. Over the last week I have been to the Sydney Rd Street Party as part of the Brunswick Music Festival, and a Sydney Road Bakery Tour as part of the Melbourne Food and Wine Festival. So here is the lowdown on Sydney Road, Brunswick.

Sydney Road is traditionally known as a street of middle eastern food. It is packed with shops selling kebabs, falafel, Turkish bread and pita bread. Due to the housing boom, the ethnic mix is 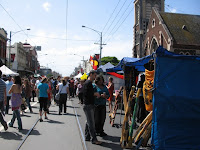 diversifying but it is still the middle eastern culture that dominates. As I take the tram home from work I see names that remind me of my travels in Turkey. I see the old guys sit outside the cafés with a coffee and I think of the Weddos song about Brunswick that I quoted above.

A decent smattering of Indian mini-marts and a huge Mediterranean supermarket demonstrate the presence of other cultures. Near Barkly Square are some trendy new cafes (such as
Green Refectory Café and Lentil as Anything), around Blyth Street a critical mass of bridal shops (including Moslem wedding dresses) is growing, and shops are scattered throughout which sell fruit & vegetables, books, clothes and middle eastern handicrafts.

About a week ago E and I went to the Sydney Road Street Party. The streets were closed to traffic and lined with stalls. The Asylum Seekers Resource Centre was selling pancakes, Moreland Bike Users Group was giving out information, a small ferris wheel was set up in front of a church, and musicians performed on a series of stages. Many stalls were selling goods: clothes, soaps, books, knick knacks, cds, soft toys. At one point I found E strumming on a 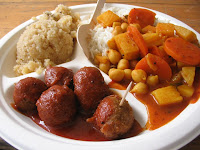 dulcimer in a music stall. We also managed to buy the most unpractical things to drag about – an oversized Turkish plate, a mirror and a record (Swinging London).

We had decided to get lunch there but the main food for sale seemed to be sausages. So when we saw the Hare Krishna stall we made a beeline for it. The food was excellent – vegetable curry, rice, kofta balls, tomato sauce and carrot halva – all for a mere $9. I liked the efficient and cheerful service that made the wait in queue a bit more bearable. The meal was so filling I couldn’t finish it. I was quite pleased to try the semolina halva for the first time and am now keen to try more. Once we left I saw lots of other food – gozleme, vegetable fritters, samosa, corn on the cob – but nothing as satisfying as the Hare Krishnas.

Then last week I did the Sydney Road Bakery Tour with my mum. When I met mum, she told me that I shouldn’t have had lunch. It 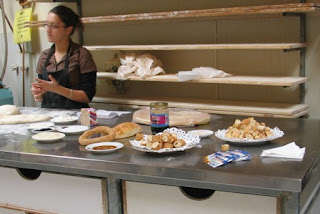 was a bit late for that advice but I still managed to do a great deal of tasting as well as viewing many kitchens and demonstrations. Our guide was an energetic character but I would have appreciated a little less dwelling on bullet holes from drive by shootings and a little more information about how Sydney Road came to be a haven for migrants from the Middle East.

We started at Pamukkale Bakery (692 Sydney Road) where we stood in the kitchen and saw how they shape Turkish Bread. The baker had gone home in exhaustion and we had another member 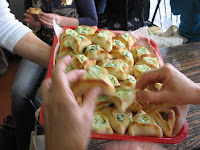 of staff talk to us. My delight there was to find that they make simits which are the sesame covered bread rings that I loved buying from street vendors in Turkey. I will be back for these.

At Phoenicians Bakery (774 Sydney Road), we were shown a display of Lebanese pizzas, and treated to a tasting of the pitta bread, dips and pickles, including the new Thai carrot dip. At Amir Bakery (817 Sydney Road) we were treated to freshly baked Iraqi cheese and spinach pastries. Our final stop was the A1 Bakery (643 Sydney Road) where again 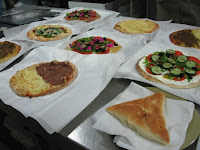 we discussed their Lebanese pizzas. The host told us about a pizza or pastie of yoghurt soaked bulgar wheat which sounded very interesting - I didn’t catch the name but I want to try it soon.

We also visited some Lebanese sweet shops. Balha’s Pastry (761 Sydney Road) gave us rosewater and ‘lady’s arms’ full of sweet cream. In their kitchen we saw huge trays of chopped pistachios and cashews, a young man putting together a tray of baklava and trays of baklava rotating in an oven. We also went to El Fayha (648 Sydney Road) where we were treated to demonstrations of making lady’s fingers, bird 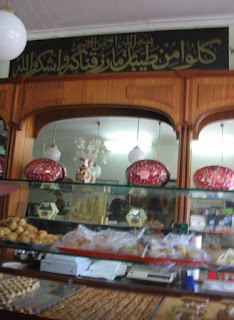 So what did I learn? One of the best pieces of advice was that you should try something from every shop because they all make their food slightly differently (possibly dependent on region). I learnt that baklava and other pastries are made by placing filo pastry sheets in the tray (without butter between each sheet) and then pouring copious amounts of butter over them, baking the tray and pouring syrup over them. Our tour guide impressed on us how hard everyone in these bakeries work, and that at Ramadan they sell two or three times what is sold the rest of the year. We also had to organize our visits around one pastry chef’s prayer times.

I really enjoyed the tour and came home with lots of food. Much of it was given away during the tour – Turkish bread, pitta bread, thyme, oregano and sesame seed pizza, haloumi pastie, and baklava and other pastries. I did buy some

beetroot dip and a little bowl on the way home.

When checking the goodie bag at home, I found we had been given recipes from the A1 bakery but it made me laugh that the dough required 10kg of flour. I don’t think I will make that much ever! Besides, I felt overwhelmed at having so much bread to eat. Here is how I ate it.

I had planned to serve my Tambo salad with baked potatoes after the tour but decided to serve it with pitta, herb pizza and dip instead. The pizza was a little dry but the pitta was lovely. The 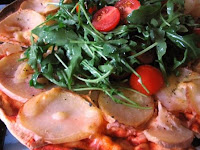 next night I used the pitta bread to make potato pizza (passata, rosemary, garlic, thinly sliced baked potato, cheese and pepper served with rocket and tomatoes – 15-20 minutes at 220 C). The Turkish bread was served as a foccacia with passata, roast pumpkin, roast asparagus, roast mushroom, rocket and cheese (10-15 minutes at 200 C). I also had Turkish bread with some leftover leek and potato soup.

All this wonderful food makes me determined to get down to Sydney Road to eat more often!
Posted by Johanna GGG at 16:34