Nutroast in the time of vagueness 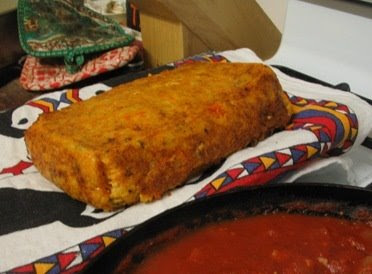 The night before, we were out seeing a great band called Rachel Unthank and the Winterset (you will see the CD purchases from the gig are on the stereo) and I said to E that I was planning to make a gluten free nut roast. ‘Why do you have to do that?’ he asked. ‘Does it mean it wont taste as good?’ Poor E is my guinea pig when I want to try something new, but he is always willing to taste.

So I thought about why I need to try a gluten free nut roast – is it because:
a) my vegetarian diet makes me want to prove anyone can eat well on any diet (except of course breatharians whose diet of sunshine and fresh air I will never attempt to emulate),
b) I am curious to try new things,
c) I feel encouraged by seeing bloggers in action to try foods that previously have just been words and pictures in cookbooks,
d) I bought a packet of millet on impulse and need to use it up,
e) I want to find great recipes that I could repeat for my coeliac niece or my sister could make for her, or 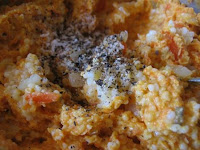 f) I never met a nut roast I didn’t like.

Well maybe the answer is 'all of the above'. I am not really sure and probably gave E a vague answer. And that would have meant I started thinking about the meal the way I cooked it.

It was Friday night and I was feeling a bit vague. I was tired and as usual didn’t read the recipe properly. I mashed parsnip that I should have grated and fried. I found I didn’t have the parsley which I had thought was in the fridge. I didn’t preheat the oven and everything took longer than I expected, including the cooking time. And when I started heating up some tomato sauce from 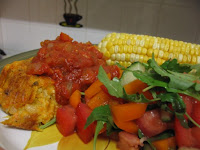 the freezer I found it was actually chilli non carne. Oops!

As I chopped and stirred and pureed I did think about E’s question about why I was making it. It was a good learning experience to use whole millet for the first time and see how mushy and glutinous it became, how it really did need lots of water, and how it spat boiling water at me like a bubbling tomato sauce or polenta. Next time millet is called for in a recipe I will understand it a little more.

I’d been all excited about a nut roast that was both gluten free and vegan. It had to be great. Actually it tasted pretty good but it was one of those dishes that I suspect would be unrecognizable to the original creator of the recipe. Why else would she advise to cover the top with foil, when I struggled to get mine to crisp up on top with no cover at all? Mine was barely

cooked inside – really it seemed just hot batter rather than the usual miracle of the oven altering the texture altogether. Possibly because I didn’t really follow the recipe. But the vivid orange colour was superb!

I wish I was one of those people with lots of patience to make recipes over and over until it is right but there are just so many recipes and so little time. I liked it but it is not what I would expect of a nut roast. I will probably try to follow the recipe properly some time but not right now. But I am posting this recipe as a sign of hope that this dish can be great. It is good but it should be so much better.

Carrot, Parsnip and Cashew Loaf
(from Vegetarian Cooking Without by Barbara Cousins)
Serves 4

While these are cooking, fry onion and garlic in oil for about 3-4 minutes and then add parsnip and gently fry nicely browned – about 20 minutes. (This was the step I missed – I boiled the parsnip with the carrot but I think this step might have improved it – BC advise not to turn up the heat and hurry the cooking.)

Grind the cashew nuts in a blender or food processor (this was not in the recipe – maybe another reason mine was so soft – but if you don’t grind the nuts, I would advise you at least chop them a bit). When carrots are done puree in food processor or blender separately to cashews (I did them together and wouldn’t advise it).

Mix all ingredients together in a mixing bowl or saucepan and spoon into a greased and lined loaf tin (I used a 22 x 18cm tin). The recipe said to cover with foil and bake at 180 C for 40 minutes. I didn’t cover it, turned it up to 220 C after 30 minutes and baked it 60 minutes altogether – it still didn’t quite crisp as I had hoped on top.

I served it with corn on the cob, tomato sauce (chopped onion, garlic, passata, a splash of vodka, wholegrain mustard and seasoning) and a salad (rocket, cucumber, tomato, orange capsicum and raspberry vinegar). It was even better the second night with tomato sauce, beetroot and pomegranate tabbouleh and some steamed broccoli.

On the Stereo:
Cruel Sister: Rachel Unthank and the Winterset.
Posted by Johanna GGG at 13:13