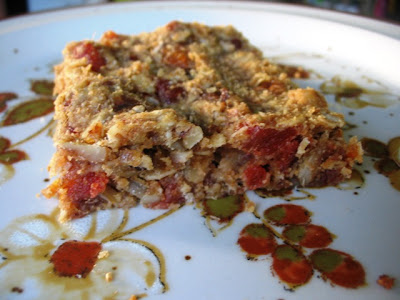 Some days I feel I could live without sugar. I love chocolate and fruit and spices in cakes and biscuits but I don’t need them to be too sweet. So I was excited to make a slice this week that is sugarfree, egg free, dairyfree, butter/oil free and could easily be converted to gluten free (by substituting GF flakes for the oats) or nut free (by substituting seeds for the nuts).

The recipe comes from Kathryn on Limes and Lycopene. She adapted a recipe from Cassie at Veggie Meal Plans. Both Cassie and Kathryn said they were eating it for breakfast. I laughed at the idea of slice for breakfast because I don’t eat sweet baking for breakfast (as a rule). But these are so good that I have indeed found myself eating one for breakfast the last few days. As Kathryn says, they really fill you up.

This slice is much less sweet than a lot of food I bake but the jewels of dried fruit give a pleasing tartness, as well as colour. The tahini, nuts and seeds all contribute to a nutty flavour and great 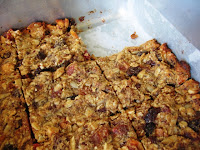 chewy texture. I loved it. And the lack of sugar gives me the perfect opportunity to share one of my favourite paragraphs from all my cookbooks. It comes from Helen Stephens who wrote the Australian Family Vegetarian Cookbook:

Most drug users, alcoholics and habitual criminals would not be where they are today if it were not for sugar. Sugar should be banned as a food and developed into an alternative to petrol for fuelling our cars!

Strong stuff! I think Helen Stephens would approve of this slice. I don’t think she would approve of E’s response to it. He said the slice was not really his thing and then he returned to his stash of chocolate covered sultanas and jelly dinosaurs. The Grim Eater had spoken! But I don’t care. This slice is so good I don’t even want to share it.

Place ½ cup water and diced dates to a small saucepan. Bring to a gentle simmer and cook about 2 to 5 minutes, stirring occasionally, until dates are soft and most of the liquid has been absorbed. (Mixture will be thick.) Allow to cool.

While date mixture is cooling, chop nuts and dried fruit as required and place remaining ingredients in a medium mixing bowl. I took my time using scissors to cup up the apricots and strawberries so that the dates were cool enough by the time I had finished. Stir tahini into date mixture. Spoon date and tahini mixture into the bowl of dry ingredients and mix well. (NB I thought it would be too dry because the date mixture was so stiff, but by the time everything was mixed it was a nice thick consistency.)

Spoon batter into the prepared cake tin. Press mixture into tin. I found it easiest to use my hands to do this because it kept sticking to the back of the spoon. Bake at 180 C for 15-20 minutes. Cool in the tin. You can cut into squares when warm or cold. It tastes excellent warm!

On the Stereo:
Songs from the South: Paul Kelly’s Greatest Hits: Paul Kelly
Posted by Johanna GGG at 15:38