Stuffed Pears - in the swag 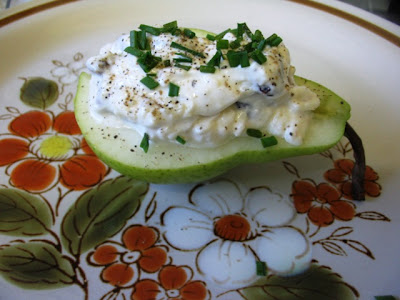 As I mentioned in my previous post, it was Australia Day yesterday. It makes me ruminate on our national cuisine, and – more to the point – do we have one? Last year I wrote about our sweet foods. Even harder is thinking about national savoury foods. If I were to mark Australia Day I would need to find traditional savoury food. So what do we have?

Firstly I thought of the great Aussie barbecue. I have written before about a vegetarian at a bbq so I wont bore you again with hardluck stories. But isn’t it interesting that when we think bbq in Australia, blokes come to mind. I’m thinking Kel Knight and his sausages, Paul Hogan and his shrimp on the barbie, and Sam Kekovich carrying on like a lamb chop. We've all seen an Everyman charring the chops, downing a coldie and wearing his ridiculously humourous apron. One would think his missus was swanning about with nothing to do!

What about the women? Naomi Watts shot to fame playing the teen girl who would prefer a roast lamb dinner than a date with Tom Cruise. We have great female cookbook writers in Australia like Margaret Fulton, Maggie Beer, Stephanie Alexander, Julie Stafford and the lovely vegetarian Vikki Leng. But what food is quintessentially Australian? What dish would they recommend for Australia Day? As with sweet food, it seems that there is no easy answer because so many of our traditions are bound up with all the nations from whence our population has migrated. 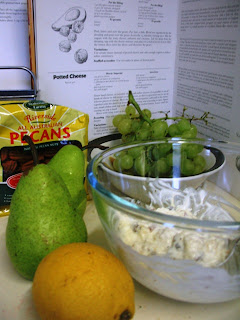 would have for Australia Day as a child but I do remember my parents buying green and gold plastic cups for a special lunch.

I no longer eat the meat I had to eat as a child. I can do a great vegetarian roast dinner and I have found excellent vegetarian dim sims at Northland shopping centre (for that nostalgic junkfood indulgence). But ask me about an Australian national dish and I am stumped.

So now I feel my cooking is more based on a British vegetarian cuisine than any Australian cuisine. Maybe the main legacy of my Australian heritage is the loose ties with our traditions that allow us to innovate, experiment and fuse cuisines, in a way that we might not if we had a cuisine to protect.

Dinner, rather than following any Australia Day traditions, was inspired by a challenge from Julia of the English blog, A Slice of Cherry Pie. She hosts In the Bag, an event which asks bloggers to cook a dish with nominated seasonal ingredients. This month is it pears, lemon and nuts. Pears aren’t really in season here but I thought I could do it, especially when I came across an intriguing recipe for pears stuffed with cheese and nuts in a 1970s cookbook by British writer, Marguerite Patten.

It is the sort of starter that I usually find more amusing than appetising. Many older vegetarian cookbooks are heavy with dairy and eggs, as if to prove that vegetarians can eat substantial meals. This attitude comes from a period before the wealth and abundance that we know today, a period when eating enough was more of a problem than eating too much. But it did fit the parameters set by Julia.

The stuffed pears were quite simple, although little things like cutting the core out of the pear took a little longer than I’d thought. I love pears au naturale and couldn’t quite bring myself to 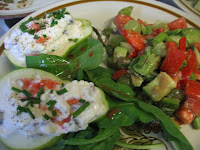 soak them in an oil and lemon mixture for 15 minutes before serving (and didn’t peel them either) – a squeeze of lemon juice was enough for me. But I am giving you the recipe as Marguerite intended it. I think if I was to make it again (and I would) that I might slice the pears rather than serving pear halves which looked good but were quite chunky. I served it for dinner with salad drizzled with an excellent raspberry vinaigrette. It was surprisingly pleasing!

Maybe it is fitting on Australia Day to eat food from our British heritage. There is a long tradition of doing so. I am not sure many people in Australia would be eating this sort of food today but I always imagine it was the height of sophistication in the 1970s. I like to imagine it might have been served as an appetiser by some of our national female icons of the era such as Margaret Whitlam, Lorraine Bayly and even Mrs Norm Everage before she became Dame Edna and an international superstar!

Stuffed Pears
(from Marguerite Patten, Vegetarian Cooking For You)
Serves 4

Peel, halve and core the pears. Put into a dish. Blend oil, lemon juice, seasoning and a pinch of sugar. Pour over the pears and leave 15 minutes, turning once. (As said above I just halved and cored my pears and squeezed a bit of lemon juice over them.)

Mix the yoghurt, nuts, cheese, sultanas and cayenne or Tabasco sauce. Lift pears from dressing and arrange on a bed of lettuce leaves. Spoon yoghurt mixture over pears and garnish. Marguerite suggests a twisted lemon slice. I used black pepper and chives. Then I gave them another squeeze of lemon juice and a drizzle of raspberry vinaigrette (recipe below).

Place all ingredients in a screw top jar and shake to combine well.

On the Stereo:
Mojo Presents the Quiet Revolution – Various Artists
Posted by Johanna GGG at 08:30