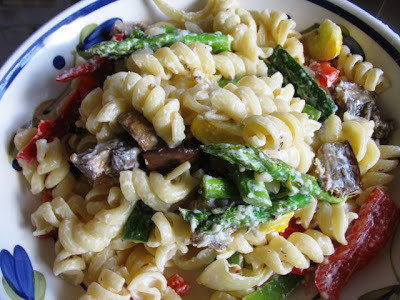 Every year I mean to celebrate Burns Night and it passes me by. The timing is always awkward. January means recovering from the festive season and then celebrating birthdays, anniversaries, and Australia Day. So I didn’t make haggis as I intended but if you want to get into the spirit you can see Wendy’s photo of a haggis in the wild and Sophie’s photo of the famed McSween’s vegetarian haggis.

However, my dinner last night did have tenuous links to Scotland. It is a recipe I found while living in Edinburgh. It was an odd time in my culinary adventures. We rented a furnished flat which included a basic equipped kitchen, but we only had a bar fridge (no freezer!) and most of 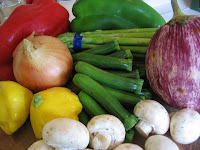 my cookbooks and lovely kitchen things were in boxes in Australia. So my cooking often had a necessary simplicity. Although, by the time I moved back home to Melbourne, I had acquired many kitchen implements and crockery.

Cooking in Scotland was made easier by the freebie magazines that abound in the UK. Many of the large supermarkets had free glossies with fine recipes, and Tescos did a vegetarian magazine which I would buy for a pittance. Plus I would find many great recipes in the newspapers and other foodie magazines.

I don’t remember which magazine I got this recipe from but it requires very little in the way of condiments and energy. It is a dish that I have made many times and always enjoyed. But I 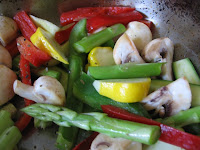 realised when I made it last night that I really only use the recipe as a guide. I am so lackadaisical with measurements that I have reproduced the original ingredients here but I encourage any interested reader to relax and innovate with this recipe.

While the recipe calls for just courgettes and peppers, I used lots of vegetables last night. I partly made it because I wanted roast vegetables to make brunch this morning. So I used lots of interesting vegies. My brother-in-law Steve, had given me a gorgeous variegated Thai eggplant, and I had found some cute miniature zucchinis (or courgettes). I also had onion, asparagus, red pepper, green pepper, mushroom and squash for lots of varied colours and flavours.

I am sending this recipe to Ruth at Once Upon a Feast for this week’s Presto Pasta Night.

Preheat oven to 220 C. Place vegetables and garlic in a roasting tin. Drizzle with oil, season and toss to coat evenly. Roast for 15-20 minutes until the vegetables are tender and beginning to brown.

While vegetables are roasting, cook the pasta and drain. Return drained pasta to saucepan and stir in vegetables, crème fraiche (or yoghurt which is what I always use), mustard and cheese.

On the stereo:
Soundtrack to Priscilla Queen of the Desert: Various Artists
Posted by Johanna GGG at 11:14