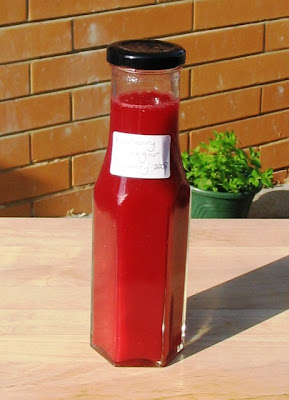 ‘As garnet red as the stained-glass window behind the altar in St Stephen’s, the heady smell wafts up like wine’. What better way to start my yarning about raspberry vinegar than with this evocative description of glorious raspberry juice from Nigel Slater’s Toast!

Last summer I bought a bottle of raspberry vinegar at Abbotsford Convent’s Slow Food Market. It was fantastic and I loved drizzling it on salads. The sweet raspberry taste brought summer into our kitchen all year long. But this year I haven’t managed to go to the sorts of markets where they might sell it and I have a snowflake’s chance in hell of finding it in the supermarket. 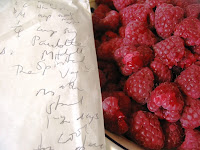 So, I thought, if Wendy can make it, so can I! And I did! It was a little intimidating so here are some copious notes for myself and for other novices.

I was interested in Wendy’s recipe but I wasn’t sure about lemon peel in it, not being a lemon lover. Then I saw another recipe that took my fancy because it had wine in it as well as vinegar. I scribbled down the recipe in a second hand bookshop while browsing and later I struggled to understand my hurried handwriting. So I kept Wendy’s recipe by my side for reassurance, and because she encourages shaking the raspberries in vinegar for fun! I also found a recipe in Vikki Leng’s Vegetarian Feasts to refer to.

Seeing the different recipes convinced me that the amount of vinegar and raspberries is up to individual fancy rather than having to follow strict guidelines. You could follow my recipe without 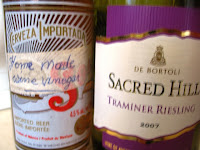 I had almost enough vinegar but not quite enough so I looked for it in a local delicatessen. I was fascinated to see home made white wine vinegar. It was in an old beer bottle with ‘Home Made Wine Vinegar’ handwritten on a piece of masking tape and a cork in the top. Now, I know some people make their own raspberry vinegar and that is easy to understand. But I struggled to get my head around how you make your own white wine vinegar. I got blank looks when I asked in the shop so I checked Wikipedia which talked about acids, fermentation and vinegar eels. If I was more cynical, I might look more carefully at the word vinegar deriving from the Old French for ‘sour wine’. But, instead, I have

visions of weird contraptions in some migrant’s backyard – a place covered with vine leaves and filled with noisy family get togethers.

The home made vinegar was quite sharp and Wiki says that better quality wine vinegars have a mature mellow flavour. I worried that my vinegar might not have been the best quality but then Wendy and Vikki Leng didn’t specify which vinegar to use so I felt reassured. And it felt fitting to be colluding with other home-based enterprises when embarking on my raspberry vinegar adventure.

Making raspberry vinegar was every bit as complex as I expected. I headed off to the Queen Vic Market to buy raspberries at a reasonable price. I bought some fruit juice in a wide necked bottle (which I decanted into another bottle) so I had a bottle I could easily pour in crushed raspberries– and secure the lid for lots of fun shaking it (thanks Wendy)! Vikki Leng suggested leaving it for 2 weeks which didn’t suit me as I had planned to make it so I could give it to my mum for her birthday, but it made me feel free to 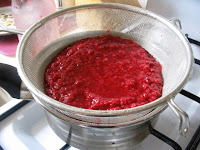 leave it for as many days as I needed. The instructions also said to leave it in a cool place which is difficult in a Melbourne summer so my only option seemed to be the fridge.

Then I came to straining it. I do not like straining – it is tedious and I hate having to throw out the remnants. So after stirring the raspberries in the sieve and then leaving them to drip for some time, I found that the only way to do it was to press the spoon down on the raspberries to squeeze out their juice (might be obvious to some but was a great discovery for me).

My recipe said to simmer 3 minutes which I didn’t see in other recipes and I presume it is to remove the alcohol from the wine. It resulted in a bit of scum which I skimmed off the top. Once I had done this I had to pour into my clean bottles, which sounds simple. But you need to be 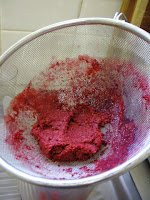 prepared. I suggest you have ‘sterilised’ bottles, a decent sized funnel and an apron – and a cloth to mop up any mess! (Also I wouldn’t recommend wearing light clothes but if you do, a pattern on them is useful to disguise stains – I speak from sorry experience!)

Now I was a little unsure about preparing the bottles. It seems that preserving is a dying art as it wasn’t easy to find advice in my cookbooks – finally I found something in a 1980s cookbook I recently found in a secondhand bookshop (Paul Southey ,1984, Gourmet Cooking with Meat: The Complete Vegetarian Cookbook ). He says to put jars for jams, jellies and preserve upside down on a baking sheet for 30 minutes at 130 C. I always worry when I have lids with plastic or rubber in this about what I do with them – probably a cork is the best option but how do you sterilise that. In the end I just washed and rinsed the bottles in hot water and am depending on the acidity of the vinegar to fight any germs! I poured in the hot liquid and put lids on immediately (as advised by Paul Southey). One more obvious comment: if the liquid is hot, is to make sure you leave a little

room at the top of the bottle for it to expand when it cools. After I had finished I found that Nigella Lawson in How to be a Domestic Goddess also gives some helpful advice.

I had a little less than 3 x 250ml bottles. The vinegar is not sweet like the raspberry vinegar I bought last year but it does have a wonderful ruby red colour and smells of raspberries. I have given away two of the bottles to my mum and to Yarrow. I have used the vinegar a few times and no one has been rushed to hospital yet so this might be something I will do again! It has been an interesting adventure. But if I see raspberry vinegar on sale next summer I might be tempted to just buy a bottle.

Crush the raspberries with a fork in a largish bowl (a shallow pasta bowl will do). Place in cool place for 1 to 14 days. I put mine in fridge. Shake occasionally if it makes you happy! Strain by pressing them in a sieve with the back of a spoon or straining through a muslin cloth and gathering the cloth to squeezing out the juice. Place in medium saucepan and simmer 3 minutes. If you strained through a sieve you now have the option of straining a second time, which will make the vinegar clearer – so it depends if you like cloudy or clear. Pour into clean (sterilised) bottle(s). It is now ready to use in salads, soups, cakes etc.

On the stereo:
Banter: a Candle Records Collection: Various Artists
Posted by Johanna GGG at 16:39