Mole and the global village 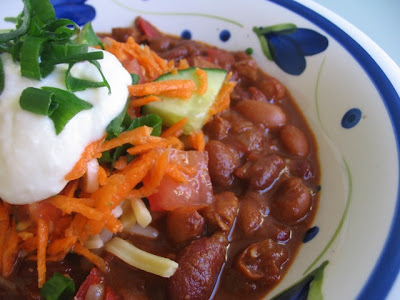 I was pleased to see there is a chili cook-off at running with tweezers. It seems like a great idea to gather up a list of chili recipes. But it got me wondering about that question, what’s in a name (would a rose smell as sweet etc etc).

When I was growing up we called it chilli con carne but since I have become a vegetarian, this always seems an inappropriate name. Recently I came across the perfect alternative, chilli non carne (which I have made with both bulgar and apricots). But I have noticed that in the USA it is often called chilli.

I learnt about these cultural differences the hard way on a visit to New York. We were grabbing a quick meal in Manhattan before we headed to the airport to fly home. I ordered nachos with chilli, guacamole and sour cream. When it arrived I was shocked to discover it was full of minced 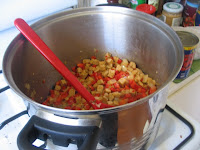 meat. A lot of nachos in Melbourne come with a plain vegetarian tomato chilli sauce and this was what I expected. I knew that the airport would be full of queues for greasy unappetising food (and don’t get me started on airplane food!) So I apologised for my lack of understanding and ask for a vegetarian version.

Hence, my wincing every time I see ‘chili’ used to describe what I call a chilli con carne. It just seems foreign. Which made me think about all the global differences that I come across in the world of recipes. So many different terminologies. Aubergine or eggplant, pepper or capsicum, spring onions or scallions, silverbeet or chard? It took me a while to realise that what is ‘broiling’ in the USA is ‘grilling’ in Australia. And I don’t have accurate enough scales to cope with the UK’s metric measurements rather than cup measurements. It is a great achievement that the international (English-speaking) food blogging community gets along so well, despite all the differences.

All this musing is partly my explanation for why I am so inept at Mexican cooking and terminology. I am still a bit confused about the difference between a chilli non carne and a mole – is the latter a subset of the former or are they seen as totally different? I made an excellent pumpkin and silverbeet mole from Denis Cotter recently and was eager to try more. I found an 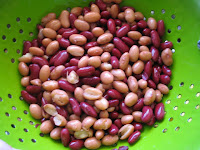 interesting one in Isa Chandra-Moskowitz’s Vegan with a Vengeance, called Chili sin Carne al Mole. Maybe that answers my question about terminology.

But the recipe has been one of the catalysts for me to think about cultural differences. It calls for pinto beans. I couldn’t see them on the supermarket shelves. But when I checked Wikipedia I found that pinto beans are ‘the most common bean in the United States and northwestern Mexico’. It seemed a bit silly for me to be traipsing around Melbourne in search of this mottled bean when anyone in the States can pick it up anywhere, so I decided to stick with our common kidney bean (and then when I found I only had one tin I decided to use the borlotti beans too).

The chilli non carne was excellent despite regional and taste differences. I am not as brave as Isa. I used less chilli powder (she used 2 tablespoons as well as a jalapeno chilli!), less molasses and less olive oil. I was opportunistic and put in bay leaves that were dying on my bay plant due to the recent heatwave, and a pinch of cardamom leftover when I ground some for cookies. I don’t like satan (oops, I mean seitan!) so I substituted tempeh.

Isa’s partner in cooking warns that ‘the consistency is more like a very chunky, thick soup than your usual stew-like chili’. Indeed at the end it did look like a intensely dark meaty soup, more like what I ate as a child than what I usually eat. I found it a bit weird that isn’t full of vegetables that I would normally add. I served it with Dench Bakery’s dense olive and rosemary bread, grated cheese, yoghurt and a simple salad that had elements of the salsa I originally intended to make (tomatoes, cucumber, grated carrot, lime zest, lime juice, salt and chilli flakes). The chilli non carne was spicy and strongly flavoured. Alone it would have been too intense, but with the salad and yoghurt mixed through, it was fantastic. A keeper!

Heat oil in large saucepan. Fry onion and chilli for 2 minutes over medium heat. Add tempeh, red capsicum and garlic and cook 8-10 minutes over medium heat until onions are soft, stirring regularly. Add cinnamon, cumin and cardamom and cook another minute, stirring constantly. Add remaining ingredients. Cover, bring to the boil and simmer for 30 minutes. Isa recommends that you let it stand at least 20 minutes before serving (overnight is better apparently). Remove bay leaves before serving.

On the stereo:
The best of Emerson, Lake and Palmer: ELP
Posted by Johanna GGG at 16:02