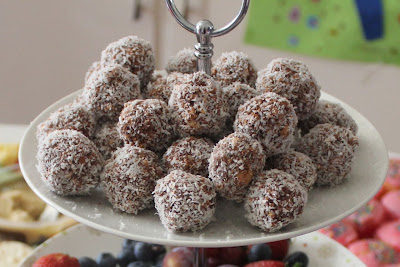 Grubs have many aliases – biscuit snowballs, rumballs, truffles. But in my family we have always called them grubs. I don’t even know why. They are embarrassingly easy to make and even easier to eat. They are best eaten fresh and gooey at room temperature. They leave behind a trail of coconut and happiness.

My childhood was full of these grubs and I have made them regularly throughout my life – very few recipes I can say that of! They have been there at school camp, midnight feasts, cake stalls, birthday parties, funerals. These days, when I make them they make me think of children that have been part of my life. Even to make them in an empty kitchen fills the space with ghostly children’s footsteps and laughter.

Once I made them to fight a bout of home sickness while living in London. I was living with a snooty cat at the time. When I put out my plate of fresh grubs, he stretched himself out to lie over them. I yelled at the cat but still had to throw out the top row and many more – I probably should have thrown them all out but I was in desperate need of comfort. The cat, of course, knew exactly what he was doing. He looked very pleased with himself and I soon moved to flats where I was happier!

Last year when Wendy asked for idiot proof recipes for her school fete, I suggested she make grubs and she reported back that they turned out perfectly. This is a recipe to make when you are lacking energy and motivation, when you have kids helping in the kitchen, when you need to get together a plate of food in a hurry.

I can’t claim they are healthy but they taste so good. Sweet soft chocolatey balls of comfort and fun. I have previously experimented with gluten free grubs with little joy. I found some success with substituting ground almonds for marie biscuits. But grubs are kiddie food and nuts are unwelcome at kids parties these days, so I didn’t feel this was too useful. I have heard of people substituting rice cookies for marie biscuits. However, as my gluten free niece was among the kids I made them for this weekend, I decided to try just leaving out the biscuits and adding more coconut. This simple solution was surprisingly successful.

If you are not in Australia, Arnotts Marie biscuits are like rich tea biscuits in UK and plain cookies in USA. The recipe below is very flexible – I don’t use a recipe so it varies each 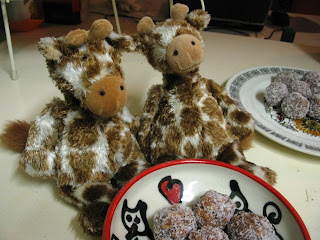 time but just in case others haven’t come across it, I thought I should put some approximate measurements.

Mansi has asked for suggestions for simple but delicious recipes for a stress free game night. The last time I watched sport with a group around the television was when Geelong won the Grand Final last September, which was a happy moment. I don’t often watch sport but, when I do, I need simple comfort food. That is why I am sending some grubs through the ether to Mansi who has requested favourite simple and quick to make recipes for her Game Night Party. In the recipe, I have written a short method for those who just want to get on with it and watch the sport, and a long method for those (like me) who prefer to be talking about the food than concentrating on goals, wickets and volleys.

1 x 400g tin of sweetened condensed milk
2-3 generous dessert spoons of cocoa, or as required
½ - 1 cup dessicated coconut, or as required
about ¾ of a 250g packet of marie biscuits (leave out for GF grubs)
Extra coconut to coat grubs

The long method:Firstly, crush the biscuits. There are a number of ways to do this, many being good for releasing stress. The best ways are to either place them in a paper bag and bash them with a rolling pin or place them in a bowl and crush with a rolling pin, a glass or a tin of beans (but watch for flying crumbs if you try the latter!). Sometimes I use a rolling pin in a bowl to crush the larger pieces of biscuit after bashing them in a paper bag. They should be crumbs not powder. It is possible to grind them in a food processor but not advisable because it means the grubs lack texture. A friend once sat on the biscuits to crush them so it is really up to you what works!

Mix crushed biscuits, cocoa, coconut, and condensed milk in a medium mixing bowl. It will still be quite soft but stiff enough to make balls. You need to use a little judgement on how many crushed biscuits to include. If it is too soft, add another biscuit or two. Do not add the whole packet at once or you may find it is too dry. At this point it is good enough to eat, and always takes some self-control to roll it into balls rather than eating it. But the coconut coating does add a certain pleasing crunchiness.

Place extra coconut in a dessert bowl. You will probably need about a cup of coconut. Use a teaspoon to scoop out spoonfuls the size of walnuts. Roll into neat balls with your hands and toss in coconut to coat. By the end of this activity, you will find that the coconut has little bits of coconut covered mixture in it and your fingers are covered with mixture. If you have been dying to eat the mixture, this is your chance – eat it off your fingers.

Store in an airtight container for at least a few days if you can keep them that long. Some people keep them in the fridge but I like them soft and prefer keeping them out of the fridge.

Gluten Free Option:
If you are making some of these for those with a gluten free diet, mix the cocoa, coconut and condensed milk together first. Put some of this mixture aside and add more coconut to make a stiff mixture and then make balls to roll in coconut. Then add crushed biscuits to the remaining mixture, being careful not to add too many that it is really dry. Or just make them all gluten free with extra coconut and don’t add biscuits to any of the mixture.

Update (Feb 2012): I made GF grubs by substituting the marie biscuits with about 1/2 GF biscuits (a 125g packet of freelicious GF tea biscuits), about 1/4 sweet and salty popcorn ground in a food processor and about 1/4 ground almonds.  They worked really well.

On the stereo:
A Short Album about Love: The Divine Comedy
Posted by Johanna GGG at 09:58