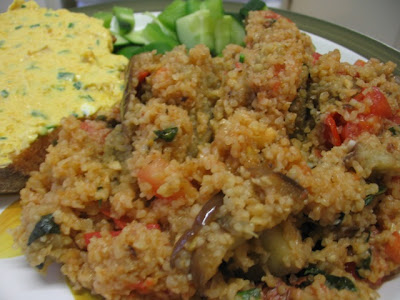 I recently bought Nigel Slater’s biography Toast and now I am hooked on this man’s words. Toast is a beautifully written memoir, telling the story of his life through his encounters with food. He evokes a time when curries and pasta were frightfully exotic in a 1960s Britain of roast dinners and rice pudding. He reminds us just how food gets entwined with our emotional experiences and comes to mean so much more than just nutrients. He fondly remembers baking jam tarts with his mother in a warm kitchen, being fed wibbly wobbly jelly when he was ill, and eating apples ‘with snow white flesh’ straight from the tree in the backyard. Despite his mother’s dislike of cooking, her food still represents nurture and when she dies, no amount of perfect cakes and pies baked by his new stepmother can compensate.

Last year Lucy directed me to the wonders of Nigel with her comment that the Kitchen Diaries (his book on a year of cooking in his kitchen) does what every blogger aspires to do. She is so 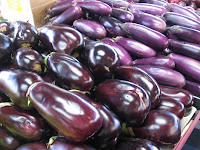 right. I want to write like Nigel. But failing that I can cook some of his meals.

I have borrowed the Kitchen Diaries from the library but I know I am going to buy it so I haven’t attempted to find time to read it. But of course I have flicked through the recipes – firstly to check there are enough vegetarian recipes for me, and secondly to check that he has not jumped ship from and learned to like eggs. I am happy to find only one egg meal – a Spanish omelette. He still shares with me the dislike of eggs that ‘rules out a hundred quick suppers.’ Here is someone who understands how I feel about eggs. Not so with meat. The Kitchen Diaries has a reasonable amount of meat-free recipes but I really desire it for the elegant prose. However, I fear I will not buy many of his other cookbooks because a quick browse in the shops makes me feel they are too full of meat recipes to justify room on my overflowing shelves (but maybe I will buy his more discursive Eating for England despite his lack of understanding of nutroasts).

As an aside, I enjoy the whole cult of cookbook celebrities who churn out thoughtful and beautiful cookbooks, but our Nigellas and Jamies are so carnivorous. I’d buy more of their books if they 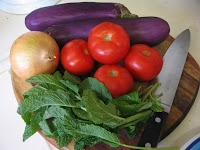 weren’t so intent on eating so much meat. I dream of the day that we give the same reverence and devotion to some of the great vegetarian cookbook writers like Mollie Katzen and Rose Elliot!

But Nigel still inspires me to embrace good food and simple dishes. Reading his books is like sitting around a kitchen table with a friend sharing ideas. I found a wonderful quote in his book, Appetite, in which he encourages readers to ‘understand that both our ingredients and our hunger are variables that should not, cannot, be subjected to a set of formulas laid down in tablets of stone. I want you to break the rules. I want you to follow your appetite.' As a cook who often strays from the recipes, I heave a sigh of relief to hear him rejoicing in the recipes being living evolving creations rather than a copyrighted possession.

I was at the Queen Victoria Market last week and was enticed by a glossy stack of purple aubergines. E does not like aubergines so I buy them a little less than I might. I spend a lot of time trying to convince him that it is all about how they are cooked – when they are good they are very very good but when they are bad they are inedible. I found a recipe in the Kitchen Diaries for Bulghur Wheat with Aubergines and Mint. I decided to try it and if I liked it I would buy the book. Oh yes! I am buying the book!

Nigel says that this is a supper by itself and I can see why. The bulghur wheat is soft, the aubergine is melting, the tomatoes burst with flavour, and the mint and lemon lift the dish into a heavenly realm. The only thing I didn’t like was the huge amount of olive oil. Often I reduce such 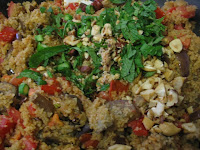 amounts but followed Nigel’s instructions and I suspect that frying the onions and aubergines in a sea of olive oil was among the reasons it tasted so good. So I will make it again, although possibly with a bit less oil.

I served it with some cucumber and green capsicum, and a simple creamy pumpkin dip on bread. I have given the recipe for the dip below as it is one that I come back to again and again when I want something different from the usual hummus and guacamole. But as Nigel suggests, the bulghur dish would make a fine simple supper all on its lonesome.

Warm oil in a large frypan or saucepan. Add onion and bayleaf for a couple of minutes (the onion doesn’t need to cook well as it will continue cooking with the aubergine). Then add the aubergine and toss well to coat with oil. Fry over medium heat for about 15 minutes or til aubergine is soft and golden. Add garlic in last couple of minutes of frying aubergines. Add bulghur wheat and stock. Cook a further 15-20 minute (Nigel says to bring to boil and simmer til wheat is nutty, but the wheat soaked up the stock and wasn’t in any state to simmer but it cooked ok). Stir through nuts, mint, lemon juice and check seasoning.

Blend all ingredients in the blender except chives which should be stirred in later. If you are using cream cheese you could alternatively just mix by hand.

On the Stereo:
Happy Blues: Michael Donato and Guillaume Bouchard
Posted by Johanna GGG at 20:19