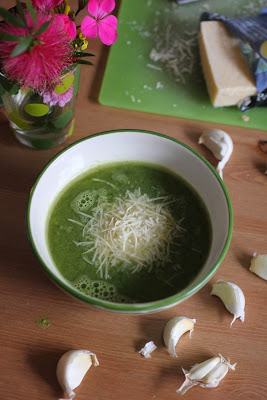 Garlic is well known for its pungent smell and ability to repel vampires (and the above quote makes me think it could explain strange men hanging around nightclubs like a bad smell!). Some people find the smell repugnant. I once shared a house with a woman who insisted on using a garlic crusher because she swore she hadn’t been able to find a boyfriend when she had chopped it by hand and the smell got into her fingers. I have always been of the belief that if everyone eats lots of garlic you don’t notice it so much. And surely it is hard to avoid eating a lot of it a lot of the time!

Colin Spencer revels in garlic – ‘the smell I inhale like perfume, the aroma on others breath is a sign of life and its celebration.’ Not surprising coming from a man who says he has happily peeled 200 garlic clove for garlic soup. One can only assume that he didn’t eat it alone in one sitting! 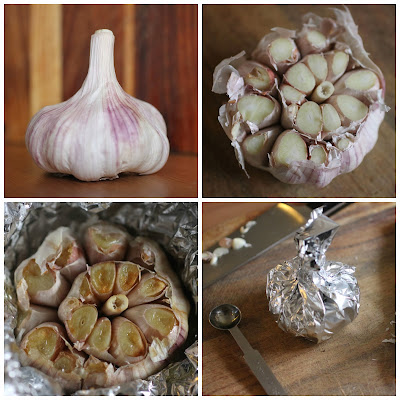 One of the things I love about garlic is the way its flavour changes depending on how you prepare it. Roasted garlic is one of the loveliest ways to eat it, and the easiest. So I liked the idea of green pea and roasted garlic soup which I noticed in a Nigel Slater book while browsing in a bookstore recently. He had got the idea from Nigella so I checked How to Eat when I got home and, lo and behold, she had a recipe for a pea and garlic crostini. I basically made this and added stock. It is so simple it is embarrassing – barely a knife stroke involved and there is lots of time to relax in the backyard while it cooks.

Nigella delights in the brilliant colours which she describes as having a ‘day-glo vibrancy’. The bright green is so lovely that it seems a shame to eat it, but eat it we did with much enjoyment. Roasting mellows the sharp edges and intensifies the flavour of the garlic leaving it with a sweet pungency that enhances the peas. Served with pumpkin scones, the soup made a simple but very satisfying supper.

I am sending this recipe to Sunita of Sunita’s World for her Think Spice event which is all about Garlic in January.

Slice the top off the head of garlic so you have just nipped the top of all the cloves (or almost all of them). Place on a square of foil and drizzle with oil. Bring edges of foil together to make a bag that is sealed at the top with a twist. Roast in 200 C oven for about 30-40 minutes. (Nigella said 60 minutes but that was too long for me because the cloves were already starting to brown slightly by about 35-40 minutes.) Garlic cloves should be soft and easy to squeeze out of their skin. (Although, unless you have asbestos hands, you might want to cool it a little before squeezing cloves out.)

Place garlic cloves, peas and stock in small saucepan and bring to the boil. Use hand held blender to puree soup. Serve with some freshly grated parmesan cheese and black pepper.

Update October 2013: I noticed that in The Guardian Word of Mouth blog was linking to this post and was so mortified by the terrible photo that I have made the soup again today so I could update the photos.  It is less dayglo than the original due to some darker homemade vegie stock but every bit as delicious!  And check out The Guardian link for more information on garlic varieties.