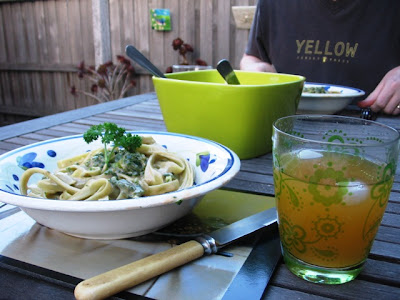 I have never liked cream much. When I was little everyone in the family had cream on desserts except me. I have been in restaurants where I have asked them to return my cake to the kitchen after drowning it in cream (only because I initially asked for no cream). And I have never liked the idea of creamy pasta sauces.

The problem is that occasionally there is a recipe (such as my recent condensed milk fudge sauce) that has to have cream. So I buy a tub of cream and hope the E will find something to eat it on. Sometimes he doesn’t and I have cream that needs to be used against all inclinations.

With half a tub of cream in mind, I was pleased to find a recipe on Sweetnicks blog while surfing the net. The vodka in the recipe interested me enough to want to try it. I have used vodka in 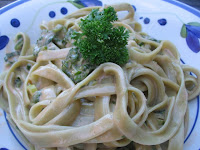 It was quick to make. But this sort of recipe makes me a little flustered when I feel it has to be served straight away, so I took time preparing ingredients and also got a little flummoxed with timing the pasta and the sauce. But the results were excellent. It reminds me why we love the word creamy! It is comforting and very tasty.

I liked this recipe because it is forgiving of my modifications. The original recipe had a lot more butter and served 4, but my lackadaisical fiddling with measurements worked well. I did wonder how much different it would be to caramelise the onions in a lot of butter as in the original recipe. But I have to buy spring onions in a bunch and I need opportunities to use them up. I 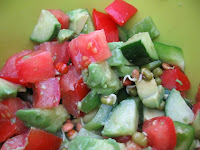 think they probably made the sauce a bit lighter which is fine in summer. I couldn’t really taste the chillis so would add a little more than the half a mild chilli next time.

I served it with a simple salad of tomatoes, cucumbers, avocado, sprouts and lemon juice. We also had some of Wendy’s Apple Green Tea which was a bit lemony but was a nice refreshing summer drink. Both the pasta sauce and the drink are on my list of recipes to repeat! The sauce is being sent to Ruth at Once Upon a Feast for Presto Pasta Nights.

Melt butter in medium frypan. Add spring onions and fry for 1 minute over medium low heat. Add vodka and chilli and simmer for a further 3 minutes. Stir in tomato paste. Turn heat to low and add remaining cream, cheese and parsley. Stir well and heat thoroughly. NB this is not a sauce that thickens! Add to pasta and toss through. (I used fettuccine, Sweetnicks used 1 pound of penne for four people.)