You say biscuits, I say scones! 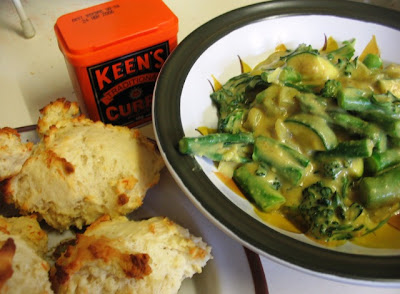 It’s not that long ago I was musing on the cultural differences in the international (English-speaking) world of blogging. But here I am again finding myself slightly bamboozled, albeit in a pleasant way!

I made some soup this week, which was most delicious. I had a yen to bake some ‘biscuits’ that I had seen on Lisa’s Kitchen. They interested me, as sometimes I want to bake something quick and savoury that can become part of dinner. As I started following the recipe, I began to question my assumption that we were talking about the same thing when Lisa and I referred to biscuits. It didn’t take me too long to find out we weren’t.

It has struck me previously that what Americans refer to as biscuits is more like what we in Australia and the UK call a scone. As usual, I have gone to Wikipedia to check out what is a biscuit. Apparently the word comes from Latin (via Middle French) and means twice baked. So in UK/Australia it makes sense that a biscuit is hard baked product. How this translated into its

softer scone-like cousin, I am not sure. But the other difference is that in the USA biscuits means predominately savoury scones and the sweet version is referred to as shortcake (which clears up another misunderstanding of mine – I always thought shortcake was more like shortbread!).

So now I think I’ve got it! I say biscuit when Americans say cookie (ie sweet), I say dry biscuit when Americans say crackers (ie savoury), I say scone when Americans say biscuit, and when my scones become sweet (and usually topped with sweet stuff like fruit and jam) Americans say shortcake. When I say dry biscuit, the Brits say water biscuits or cream crackers (it took me a long time in the UK to realise these biscuits weren’t filled with cream!). But I am still not sure about digestive biscuits in the UK – I think they are just at the plain end of Australian biscuits. All I can tell you is that chocolate digestives taste good and were often my best friend while travelling in the UK (but in Australia we would call them chocolate wheatens). How confusing is that!

Lisa, you are messing with my head but your ‘biscuits’ were delicious, simple and a fine accompaniment to our soup. Plus you provided much fodder for dinner table conversation – picture me picking up one of these and asking E if it was a scone or a biscuit. Definitely a scone, 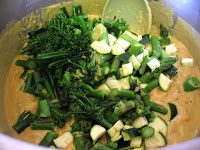 we decided, after careful consideration. Not a traditional scone dough that you roll out and cut into round circles but still a scone in our countries!

As if my head wasn’t spinning enough, I also found the soup wasn’t as I expected. It had cashew nut butter in it and I was thinking nutty soup rather than creamy soup. I should have known about this too because I have been interested in lots of recipes using cashew nuts to make them creamy. Cashew nut butter adds a sweet creaminess to soups that is quite different from adding peanut butter. I increased the vegetables and found it was still quite rich so we only needed small servings. This also tasted really good. Dinner was a pleasant surprise indeed!

Line a baking tray with baking paper or grease tray lightly. Put flour and salt in a medium bowl. Add the olive oil, milk and cheese. Stir until just combined. Drop the dough onto prepared baking tray using a dessert spoon (or generous tablespoonfuls ). Bake in a preheated 230 C oven for 12 - 17 minutes or until lightly browned. Taste good served with soup or spread with jam, peanut butter or promite!

Heat oil over low heat in a medium to large saucepan. Fry onion, celery and garlic til soft. If it starts to stick tip some water in (or you can use more oil which is what Nava Atlas did). Nava also pureed this mixture but I didn’t bother and prefer the chunkiness for this soup – of course it is also the path of least resistance!

Whisk the cashew butter and remaining water in a small bowl, by gradually adding the water. Add to onion mixture. Add spices and juices. Simmer for 5-15 minutes. (Nava says 15 minutes but I don’t think it needs so much time and I found mine was getting quite thick.) Add more water if getting too thick. Stir in steamed vegetables and serve with garnishes of spring onions and cashews.