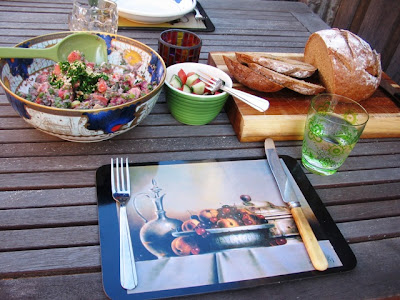 I had this recipe in my head because it seemed a good way to use up what was in the fridge on a hot night in summer. This seems a case of osmosis where I have read and followed so many interesting potato salad recipes that I can now do my own experiments. I made it with my (most probably misguided) idea of Eastern European cuisine. It wasn’t the prettiest of meals but it tasted fantastic.

The dressing was one of the best I have made – creamy, a little sour and it had the pleasing but 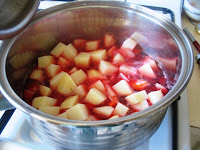 subtle bitterness of hot mustard. The potatoes went more orange than pink when I boiled them in the company of beetroots and carrots. The vegetables were sweet, the pickles were sour, the capers bitter, the seeds had crunch and the dressing finished it off perfectly. I also served up some tomato and cucumber tossed in a little balsamic vinegar and bread.

When we sat down to dinner with salads and bread, E was the Grim Eater and asked, ‘is that all?’ He is an old fashioned boy who thinks salad is something on the side of the plate. But this was the main event. He was pleasantly surprised. Although he disproved of Brown’s dense dark rye bread which he said needed to be cut with a chainsaw. I couldn’t disagree it was a task to slice it but loved its sourness and the caramel of the rye which complemented the salad.

That’s the food. Now here is the challenge I set myself. I have four wonderful books in my house at present that focus on vegetables – not just the recipes but their stories. You can tell by the titles that these are authors who like to write. Lately I have been fascinated by the histories and anecdotes about vegetables. I confess that these interest me more than the gardening and nutritional information but I am slowly learning. Here are the books (from my bookshelf and the library) and below is a list of the vegetables and something interesting about each:

Potatoes – Farmer John quotes Rudolph Steiner as saying that it is no coincidence that the rise in world-wide materialism correlates with the increase in consumption of the potato. What does he mean? Is it solely about potatoes leaving the New World to colonise the Western world? Does this have anything to do with the rise in the use of potatoes for chips and crisps which Cotter

calls the potato’s ‘packaged offspring’? Or is it the startling revelation from Spencer that our friend Mr Potato Head is actually one of the notorious nightshade family? I’ll leave the answer up to you!

Beetroots – Cheeseman notes that throughout history the leaves of the beet have been more prized than the root. She talks about the Greeks offering beet greens to the god Apollo on a silver platter at the temple of Delphi and the stored beet roots feeding the families of northern and eastern Europe during long freezing winters. Russian healers claimed that beets could cure tuberculosis, scurvy and toothache while some Russian women used beet pigment to rouge their cheeks and keep away mosquitos. In more recent times, Cotter comments, ironically beetroot has been preserved to bring ‘a ray of summer sunshine to the winter table’ but in his childhood (and mine) pickled beetroots were eaten in summer with salad.

Carrots – Cheeseman tells the lovely story about how carrots originally came in many different colours – purple, black, white, yellow, green, red. Then the Dutch crossbred orange and red carrots to make orange carrots because they were ruled by the House of Orange. These became all the rage. Farmer John has some lovely esoteric notes including the one about the policeman refusing the offer of a carrot because ‘I can’t take a carrot while I’m on duty’. Which begs the question: is a carrot a bribe or an offensive weapon or something else?

Green Peas – Spencer talks about early sightings of peas – in a tomb in Thebes in Ancient Egypt, in a Greek play written in the Fifth Century BC, and at the French court of Louis XIV in 1695. But Cheeseman had the best story about peas in Norse legends. Apparently they said that peas were sent to earth by Thor in the talons of dragons to fill up the water wells of unworthy humans. Fortunately some of the not-so-nice peas escaped to flourish into the nourishing plants that we know and love today. The Norsemen dedicated their plant to Thor and vowed to only eat peas on Thor’s Day (Thursday). My mother thought one day of the week was not enough and I ate them much more in my childhood.

Spring Onions – This vegetable gets the least coverage in my vegetable books, because its big sister gets all the attention and no one knows quite what to call this slim young’un. Spencer is illuminating. He explains that these are merely young onions which are harvested before the green shoots die off. They are also known as scallions, named after the ancient Palestine port of Ascalon (which incidentally is near that modern Israeli city Ashkelon which I visited occasionally when I lived on kibbutz). The onion family is an old one that has featured in the bible, the pyramid carvings and Mesopotamia. But while it was loved by many, there were those who avoid onions. Some Egyptians believed they incited lust, the Roman gourmet, Apicius (AD230) 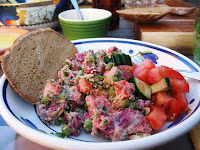 probably associated them with diets of the poor, and in India the Brahmins were thought to avoid onions, possibly because they were allied with the cooking of meat.

I will finish with a quote from Colin Spencer’s book which I bought this week and am loving. His words could apply to all food and go some way to articulating why I enjoy the world of food blogging so much:

‘Every vegetable has a history. … All have a tale to tell; all have incidents in their lives which reflect on humankind, on what we thought and felt, exposing our vanity and aspirations, our most intimate personal habits and beliefs, as revealing as any archaeological remains.’

Fascinating stuff! I am sending this post to Kalyn of Kalyn’s Kitchen who is hosting the first Weekend Herb Blogging event of the year, and I hope her readers will enjoy some of these tales.

Place potatoes, beetroot and carrot in medium-large saucepan with 1-2 cups of water. Cover and bring to the boil. Simmer for about 20 minutes til soft. Add peas to saucepan a couple of minutes before they are finished (or if you forget just add when finished, and they will cook enough in the heat of the vegetables.) Drain and place in a large salad bowl. Add spring onion, capers and pickle. Add most of the parsley and seeds but reserve some for garnish.

To prepare dressing, mix all ingredients together in a small bowl. Toss through salad ingredients and garnish with reserved parsley and seeds. Serve warm or at room temperature with pumpernickel or dark rye bread.

On the Stereo:
Journey into Light: various artists