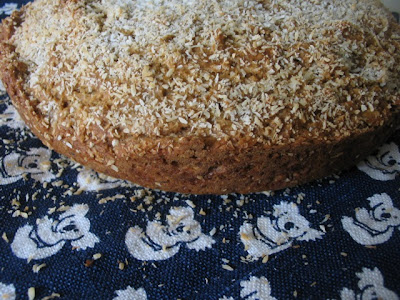 An advantage of blogs over cookbooks is that you see the reality not just the food stylist’s vision. I recently came across a great quote in Farmer John’s Vegetable Cookbook – overheard as many of the best quotes are – from someone saying that reading a recipe is like reading science fiction: when you get to the end you think that’s never going to happen. I sometimes feel that way reading cookbooks. I love the ideas and the photos but it just doesn’t seem like something I will ever make. Blogs are different.

Lots of blogs are about people cooking at home, making mistakes, eating the food, and talking about it. So it is fascinating when a recipe starts to do the round of blogs and you can see the different experiences people have had with it. Like the velveteen rabbit, it becomes real. It is happening. It is being eaten.

So with the coconut chai cake that I made today, which I discovered when Cindy baked it last year. She got it from Helios via Susan. Cindy made it for afternoon snacks, Helios made it when moving house, Susan made it for breakfast but said it smelled so good that she ended up eating some of it the night before the morning after! Then I wondered who else had made it and put the cake into my search engine. Lots more people – Nandita, Melbourne Larder, even Laura Rebecca (who made it despite rather than because it was vegan!)

There were lots of mixed reactions which felt like friendly advice to help me learn from others’ experiences. Cindy gave the excellent advice to drop the almond essence so I don’t have to feel guilty at not rushing out to buy another flavouring to cram into my pantry. Nandita used soy milk instead of apple sauce and chickpea flour instead of plain flour. Melbourne Larder used apple and pear puree and warned it was quite sweet.

So now my turn to add to the bloggy blethering: I made it yesterday because I had some teabags I was given for a present and remembered this recipe as a great way to use them. The kitchen smelled wonderfully spicy as it came out of the oven – the chai teabags even made the bin smell 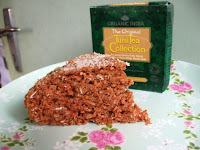 fragrant. The cake was aromatic, moist and a little stodgy. I was glad I reduced the sugar a little as it was quite sweet enough for me.

The cake is vegan and has very little oil or fat in it – not surprising since it originated at Susan’s Fat Free Vegan blog. I found the cake nice but nothing special. E liked it a lot more because it is less rich than a lot of my lovely chocolate cakes. I thought it might taste better with a bit of butter and E fancied some cream with it – which may not be in the spirit of Susan’s blog. However, I think I will be making it again because it will be a wholesome way of filling me up during long afternoons at work.

I took some cake down to my parents’ place today. When I gave my mum a piece she said the smell reminded her of something. I realised what it was when I gave my dad a piece. ‘You’ll like it,’ I told him as I realised why we found the smell familiar, ‘it is a bit like honey roll.’

Honey roll is a type of swiss roll. It is a sweet sponge cake rolled up with a honeyed cream inside it, like what we call a jam roll (and Americans call a jelly roll). I have had a few discussions with my dad about it because he worries it is an endangered species. He thinks it is the perfect morsel to follow a sandwich at lunchtime but has had trouble finding it. Strangely enough, he also thinks it gets better as it ages. So maybe it is being sold less because there are too many homes around Melbourne where people have honey roll maturing at the back of their pantries!

I am glad to report that dad has located the elusive honey roll so all is well with the world. But maybe if it disappears altogether, he could be comforted by this coconut chai cake. After all, I think it gets better for sitting overnight!

Brew the chai teabags in 1 cup of hot water, and let the water cool with the teabags left in. (it took me about 90 minutes). If you are making your own stewed apples (see Note) now is a good time to do it.

Place all ingredients (except reserved coconut) iIn a medium-sized mixing bowl and mix well. Spoon into prepared cake tin. Bake for 25 35 minutes. (It took me about 30 minutes.) It is done when a skewer comes out cleanly. Cool in tin 5-10 minutes and then turn out onto wire rack to cool.

Note on Applesauce: I never have applesauce around my house and never see it in the shops although I am sure I could find it. But when I was growing up my mum was always making stewed apples for desserts, so this seems more natural to me. For this recipe I peeled, cored and finely sliced a medium sized Granny Smith apple and cooked it on low in 1 cup of water for about 30 minutes til apples, stirring frequently. It is cooked when most of the water has evaporated and it can be mushed up with the back of a spoon to make a puree. But I only added the water gradually so in future I might add more water first thing and find I need a little less water and time. The applesauce directions I could find on the web suggested to me I should add cinnamon for true applesauce but I just was generous with cinnamon in the cake.

On the stereo:
Suite Elégiaque: Newtopia Project
Posted by Johanna GGG at 22:40