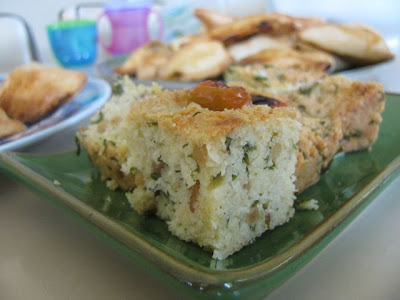 Last weekend was full of food and family. I had many ideas floating around in my head of all the wonderful food I would make and despite this – or maybe due to too many wild ideas – I didn’t produce much food to be proud of. Fortunately others made some delicious food and my one success, a low carb gf cheese and almond bread, was soooo good it made up for my failures.

On Saturday we were off to a barbecue at Fran and John’s. Fran had suggested I make salad. No worries. I had been thinking about making rice salad and putting aside some of the rice for Sylvia. I cruised around the supermarket buying lots of nice veggies to put in the salad but didn’t pay much attention to the dressing. Surely I would have some ideas on my blog. 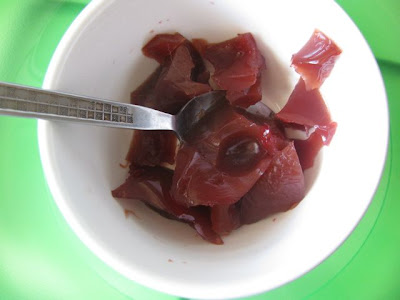 Before I headed out to the shops I finally got around to using my agar agar for the first time. I had my eye on AOF’s Kanten – a jelly with fruit in it. She used flakes and I used powder so I just followed the instructions on the packet. Never again! I was looking forward to some lovely cool jelly when I got home but was most disappointed. The result was like rubber. E said it looked like something for sealing windows. AOF had suggested using a lot less flakes than she had initially been advised so maybe I will try again with less powder to see if I can make a jelly a bit more like the one my mum makes.

With the jelly idea gone kaput, I set about making rice salad. Firstly I got out my brown rice, only to find it was infested with weevils. So I had to use basmati. Not my first choice but it would do. There was heaps of it. Herein lay my problem. I am so used to making smaller salads that I didn’t put enough dressing on it. The salad was nice and laden with vegetables but just a little lacking in taste. I also put in cucumber because it is Sylvia’s favourite vegetable but I forgot that John doesn’t like it. 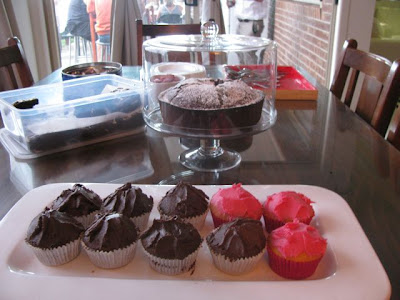 Fortunately Fran had some wonderful cheese pastisti that John’s mum had made. Delicious! Sylvia had her first taste of non-pureed rice at the party. She never refused a bit of it although quite a bit fell onto the couch (sorry Fran and John!) For dessert there was lots of yummy chocolate cake.

Meanwhile E was cutting a mean figure in John’s pool room. Yes their house is big enough for a pool room! When we left E said to me that he thought it was just an Aussie myth perpetrated by The Castle. This is a great film about little Aussie battlers with colourful language. After seeing this film E and I used to bandy about the terms ‘suffer in your jocks’ and ‘you little ripper’ with much amusement. But we never got into using the Trading Post. According to the film it was the source of all sorts of bargain purchases. These treasures went ‘straight to the pool room’! The film is now a historical document illustrating when the Trading Post was a thick bundle of newsprint rather than a website. 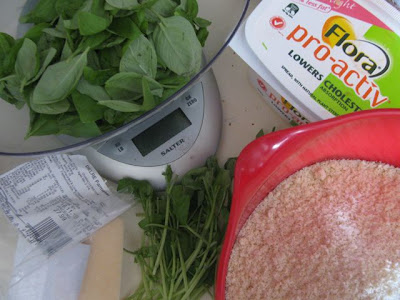 The next day was a lunch for my mum’s birthday. Mum had decided to make tacos, which suit a variety of diets. She and my sisters are into low carb diets at the moment so I had wanted to take something appropriate (ie no cake). Feeling tired from yesterday and realizing I didn’t have cottage cheese for the Cheesy Almond Muffins I had planned, it all seemed too much. Then I realized I had the ingredients for a Rose Elliot low carb cheese and almond bread. It was a recipe I had copied out in a bookstore a couple of years ago. 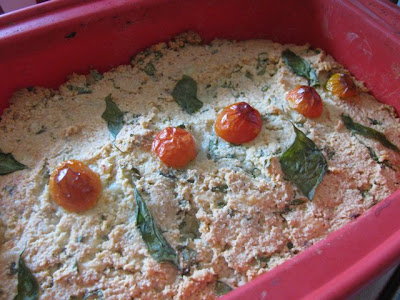 ‘Could you feed Sylvia for a moment for me while I quickly get this bread in the oven,’ I said to E. He took over at the highchair while I threw everything into a bowl. I wasn’t as quick as I imagined. It took a little time to grate cheese and chop basil but was still fairly easy. I decorated it with cherry tomatoes from the garden and some basil leaves. Once the loaf came out of the oven, we wrapped it in a tea towel, put it in the car and headed off to my folk’s place. The warm bread smelt wonderful. 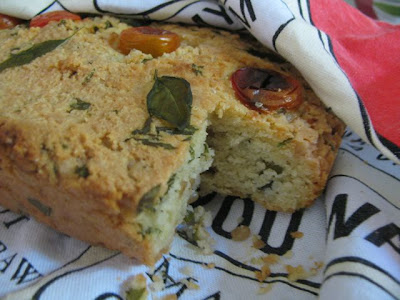 We got to Geelong and were greeted with lots of chaos – and food. My mum had whipped up some amazing empanadas. The vegetarian ones had potatoes, onion, tomato, currants and spices (I think). E loved the meat ones and was raving about them all the way home. They were great finger food to have on the table before the tacos. 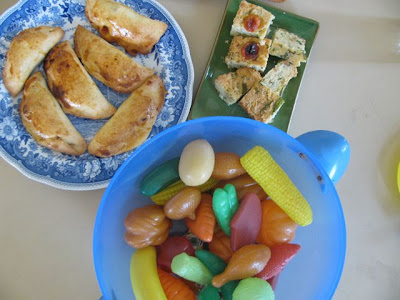 My mum always loves to try new food so we had a taste of the cheese and almond bread soon after we arrived. It was very good – dense and cheesy. It is no for those watching their cholesterol intact but my sister Chris, who hasn’t been eating much bread, found this a wonderful low carb loaf. Susie, who is celiac, liked it but said she would love it with some butter on it. Even baby Dash ate a piece. It would be great as a picnic or lunchbox snack (except at schools that are nut-free). I think you might say this bread would go straight to the pool room. 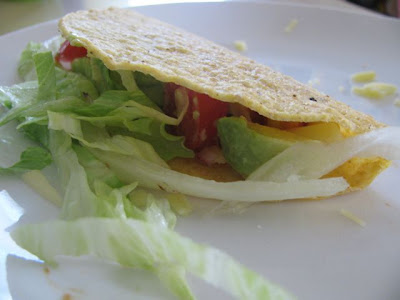 After the tacos we had some desserts made by mum. She is like me and loves a chance to bake for a crowd, even on her birthday. She made a chocolate sponge for a birthday cake, a pavlova with crushed peppermint crisp because my nieces love it, and caramel tart, which is Chris’ favourite. It looks like it might be little Dash’s favourite too by the satisfaction on his face when he tasted it for the first time.

Unfortunately neither Chris nor Dash will have one of mum’s caramel tarts for some time as it was their last family dinner before they headed home to Ireland on Wednesday. But Susie is hoping there will be many more gf versions of the tart because it was so good that you couldn’t tell the difference with the regular version. 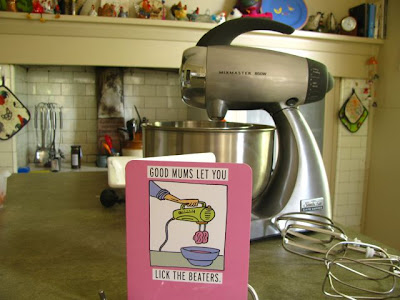 My mum spends so much time in the kitchen that I am sure she will get a lot of use out of her new Sunbeam mix master (Australia’s answer to the KitchenAid). It was a present to her from all the family. Quite a selfish present really, as we are all looking forward to all the wonderful food she will make with it. I am sure that Chris, Fergal and Dash will be back soon for more of mum’s cooking. Meanwhile I have given them the recipe for the cheese and almond bread to keep them going. 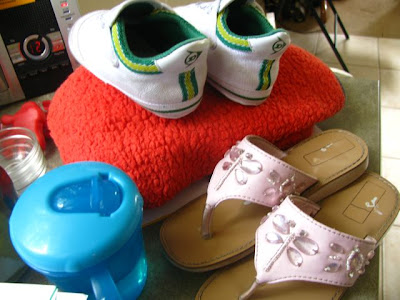 Mix together and bake in greased and lined (or silicone) loaf tin for 50 minutes at 180 C.

On the Stereo:
As day follows night: Sarah Blasko
Posted by Johanna GGG at 12:43