Baby Food, Cookies and a Day at the Zoo 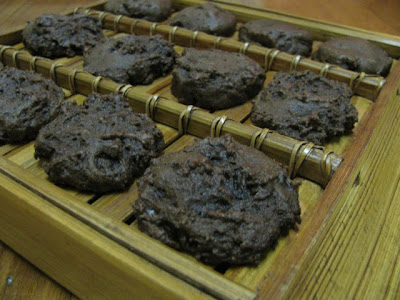 Recently I was made aware that I have blogging quite some time. I made fudge cookies and they tasted very like chocolate cookies I made a couple of years back. When I checked the post I was thinking of I found that both recipes originated from Alice Medrich in Bittersweet. I felt clever for recognising the taste, if not the ingredients list, and grateful to Sylvia for sharing some of her mashed pumpkin for a worthy cause. 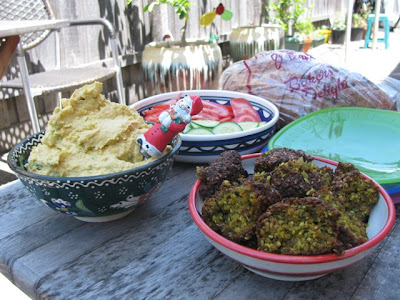 I am still finding it a pain to be making different food for Sylvia to us but it is great to have mashed pumpkin in the fridge. It is really meant for her but it is so versatile in recipes that I find lots of uses. Last week my dad came up for lunch and I remembered we had some falafel in the fridge so I made some pumpkin hummus (a bit like this one) with a bit of Sylvia’s puree and it was delicious.

We took Sylvia’s highchair into the backyard and ate lunch outside. She ate well with a plate of grated carrot, grated cucumber, white beans and some bread (plus a rice cake in her bib). At first try a few weeks back she was just spitting out the bread, so I am pleased she is now enjoying it. I was surprised to find I have to buy more nectarines and cucumber because she loves them so much. She loves lots of fruit but I am still struggling to get her to eat savoury foods. 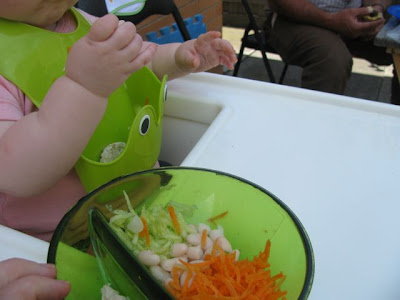 It is still quite a challenge to feed her. One day she eats terribly, the next she is biting my heels under the kitchen table because she is so hungry. Most days she wants to overturn her plate. Tips on feeding her are very helpful. Putting the just-cooked puree in the freezer to cool it down quickly (thanks Susie) and giving her another spoon when she wants to grab the spoon from me to assert her independence (thanks mum) are very helpful. I have also had good advice from here (Nicki) and Ireland (Chris and Fergal) that the Tommy Tippee sip and seal cup is the best one to take out and about without leaks. 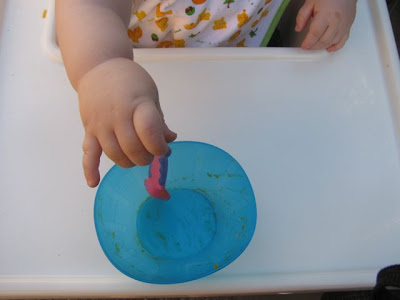 I have started making Sylvia a simple pumpkin mash as an easy way to get vegetables into her diet. You can see that she enjoys this. (One of my most successful early puree combinations was pumpkin, apple and peach.) I find it easy to quickly mash up some pumpkin but I am hoping we will progress to greener vegies soon.

Meanwhile I have many uses for mashed pumpkin in addition to baby food. I love to include it in baking. So I was immediately drawn to a recipe that Sarah at What’s Smells So Good posted recently for Pumpkin Spice Fudge Cookies. I baked a double batch the day after I saw it. I made a few small changes including using a bit of buckwheat flour and some ginger. They were so good, fudgy and intensely chocolatey. 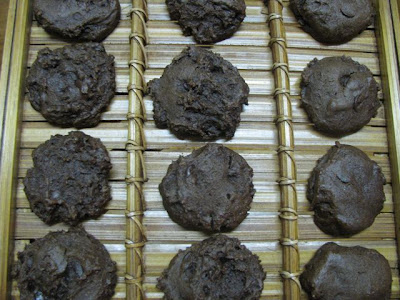 Imagine my surprise to find I had already made a version of these cookies. I was even more surprised because I confess this is one of the few batches of cookies I put in the freezer and had to throw out. Was it the addition of balsamic vinegar? I don’t think so. I suspect it was because I made them in the first trimester of pregnancy when I found chocolate made me queasy. Making them while breastfeeding, which makes me so hungry, is such a different experience. I can’t get enough of them.

But, despite temptation to scoff them down at home while E was at work, I was still able to share them. My family had an outing to the zoo last week so I got up early and miraculously arrived at the zoo before it opened at 9am. Unfortunately the rest of the family were an hour late and I had forgotten my mobile. I was quite impatient by the time everyone arrived. But there are some in my family who believe that having a mobile phone means never having to apologise for being late. Grrrr! ‘Nuff said! 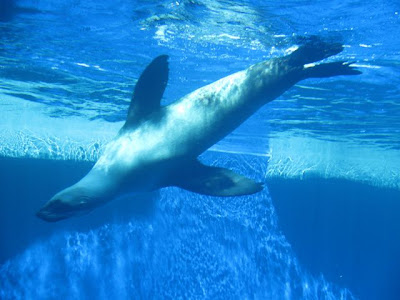 I spent some time at the wonderful new seal exhibition which is calming and cooling. I never visit the zoo without seeing the giraffes. They were not cooperating with me when I got my camera out but one bold little ostrich was quite keen to play a starring role. 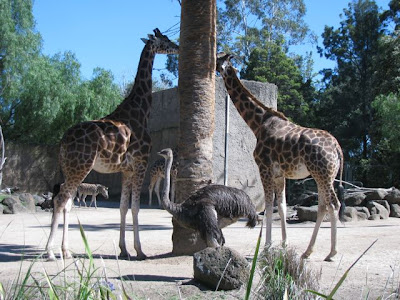 The Melbourne Zoo has had a lot of work to improve it since I was a child. My Irish brother-in-law was quite impressed with it despite his misgivings about going to a zoo. The elephants, orangutans and butterfly house were other highlights. 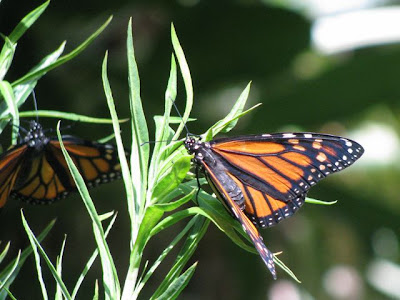 I had to leave early for a dentist appointment. I left Sylvia in the capable hands of my mum and she brought her home when I had finished. My little nephew came along too and it was amusing – and a little nervewracking – to watch Dash and Sylvia chasing after Zinc in unison. I was pleased to hear that in my absence, the chocolate biscuits had been enjoyed by the family over lunch at the zoo.

Preheat oven to 350F. Line or grease a baking tray.

Melt the butter in a medium bowl in the microwave. Whisk in sugars, pumpkin and vanilla, until smooth. Add dry ingredients and stir until just combined into a slightly stiff dough.

Drop teaspoonfuls onto baking try and flatten slightly with the back of a spoon. NB: I smoothed some with damp hands but preferred the rough look when I kept the moulding to a minimum. Bake 10 minutes, or until set. Cool on tray for 5 minutes, then transfer to a wire rack to cool completely.