Tetris, the Foolish Hedgehog and Brunch 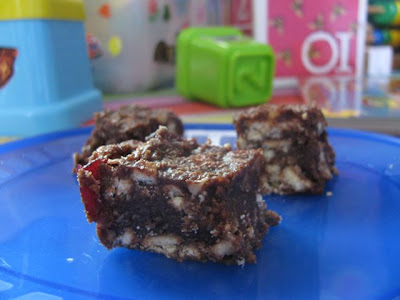 I don’t like change. When I find a mesmerizing computer game, I am loyal (or addicted). When I set up the furniture in a room, I am happy for it to stay that way forever. When I have the hedgehog recipe that my mum has been making for me since I was a small, I believe it is the one. Babies, heat and a curiosity in new recipes are all great catalysts for change.

Since Sylvia has arrived, we have now rearranged furniture in all our rooms. The most recent configuration happened on this weekend when my dad, brother, Paul, sister, Fran and her partner, John all came over to help. Paul and John were amazing in moving a sofa bed with great ease. Dad helped to put a baby gate to the bathroom where Zinc’s food and cat litter is kept. They all helped with moving our bed and putting up a new cot for Sylvia. 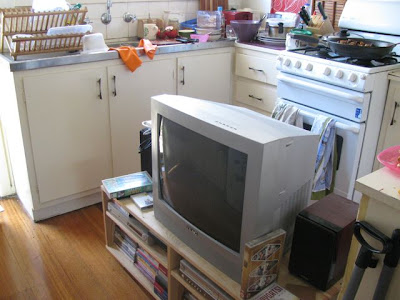 This is major change. Sylvia now has her own bedroom. We have lost a study and gained a bigger, more crowded bedroom. Our place is so small that for us to move anything, required another piece of furniture to go elsewhere. Both Fran and Paul entered the house on Sunday morning and said it is like Tetris.

Ah, Tetris takes me back to the first computer I ever owned. An Apple Mac Classic II. It was small and clunky and grey compared to the bright, streamlined computers of today. But it got me through a Masters thesis as well as many other tasks. Being a student, I spent a lot of my time procrastinating in front of tetris, watching the little blocks fall from the sky to click together if I could run around (figuratively speaking as it was actually my mouse racing around) to organise it. This weekend, it felt like the computer game had become my reality, though fortunately I didn’t do any of the heavy lifting.

More change is yet to come before things settle, as our loungeroom is currently in upheaval with a new sofa added to the mix. Luckily I am used to a bit of a mess in our house. Here is a photo from the bedroom after the move. 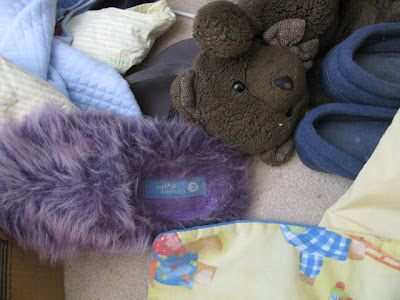 I avoided all the tidying up needed for such a move and put my mind to the important matters: what to feed everyone? It was agreed that the early morning – before the heat – suited everyone so I decided to make a brunch dish. Potatoes, sausages (vegetarian of course) and tomatoes are a classic breakfast combination. I had thought about making everything the night before but we were doing all the last moment shifting stuff about so I didn’t have the energy. 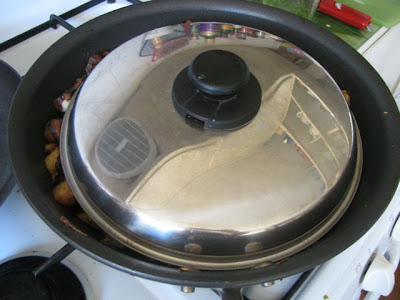 When I rose the next morning I knew what I needed to do. I used this aloo jeera recipe for guidance in cooking the potatoes on the stovetop, which seemed quicker in the morning than roasting. One they were done, I could leave this dish to slowly cook on the stovetop as we ran around with measuring tapes and shifting more stuff. Once the potatoes had cooked, I just needed to stir it all occasionally. 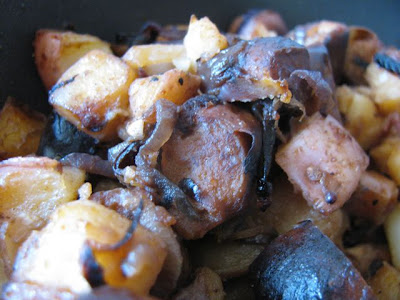 ‘Does anyone want something to eat,’ I asked. No, I’m fine, came the reply from everyone. Paul decided he would have a bit and enjoyed it. E loved it and so did I. Although not many of our workers needed feeding, it was a great dish to have on a day when I didn’t feel like preparing meals. It served us for breakfast, lunch and dinner.

Of course, when they all said they didn’t need brunch, I wasn’t about to take no for an answer. If they didn’t want the potato and sausages, then I suggested they might want some hedgehog or fruit salad that I had made the day before. 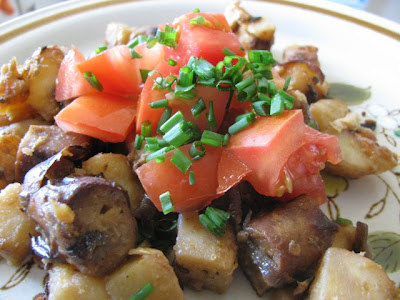 My dad went the healthy route and had some fruit salad while John’s sweet tooth prevailed and he had the hedgehog. So there was something for everyone. And no one went away empty handed. I packaged up little tubs of hedgehog for all of them to take home. The feedback was that it was very pleasing.

Meanwhile at our place, E told me it was the best hedgehog I had ever made. Blasphemer! Doesn’t he know it is not the one that I have grown up on! However, I have to admit this was a very good hedgehog. I was first tempted to make it when I saw Steph post the recipe. Then Lisa brought some along to the vegan pot luck picnic and I was smitten. 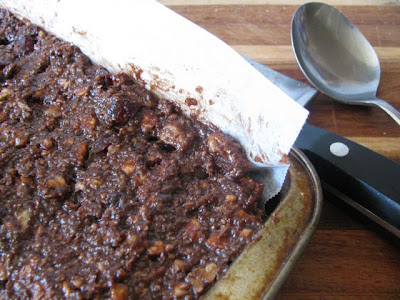 But there was another reason I was tempted to make this recipe. It was an excellent way to use up some choc chips because it was forecast to be a scorching 41 C on Monday. On our last horribly hot day, one of our good blocks of chocolate was ruined. So this time I was taking no chances. I particularly wanted a recipe that did not require me to turn on the oven because the weather was already hot enough.

Steph’s hedgehog is a richer, veganised version of my mum’s. It was a lot more gooey and made more pieces than the one I know and love but tasted surprisingly similar. I found the mixture so soft that I added more biscuits and some coconut. Rather than leave it out of the fridge once set, as I usually do, I found I had to leave it in the fridge. Even the fridge could not detract from its utter utter deliciousness. 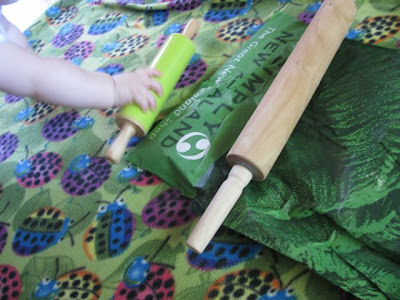 I thought that Sylvia might like to help with crushing the biscuits for the hedgehog. But she just played with her little rolling pin and wanted my big one too. I thought this photo is a good illustration of how much of a hoarder I am. I was crushing the biscuits in a paper bag I bought souvenirs in when visiting New Zealand almost 5 years ago. The paper bag resurfaced during a recent clean up. 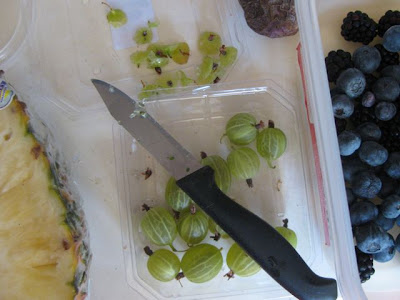 Unfortunately, it cannot all be marvelous successes in my kitchen (I have had two failures today so I can confidently say this). When I made the fruit salad I had discovered a punnet of gooseberries that I had bought to sate my curiosity about gooseberry fool. I tried a version with yoghurt rather than cream and found it was only good as sauce for the hedgehog. The work-in-progress recipe is below and I hope I will refine it at a later stage. 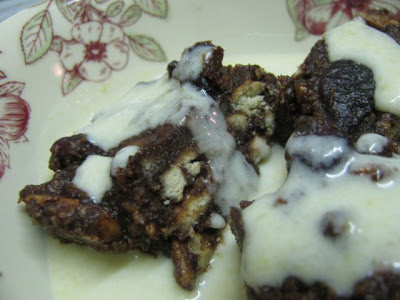 So covered with gooseberry fool, I had a rather foolish hedgehog. However foolish or not, this is a delicious slice that is a great indulgence in hot weather and a wonderful way to say thank you for hard tetris work. It just proves that even my favourite recipes can cope with change.

Meanwhile grill (or broil) sausages so they are well browned. I brown them each side and then turn off the heat and shut the grill for about 5 or so minutes so they brwn evenly. When they are done, cut into 1cm slices.

Stir in onions, sausages and remaining ingredients. Tip in a little water. Cover and cook for another 10 minutes without lifting the lid. Then lower the heat and gently cook for about 30 minutes, stirring occasionally.

Serve topped with a few spoons of freshly chopped tomatoes and a sprinkle of chives.

Melt the chocolate in a large bowl in the microwave for about 30 seconds and then add margarine, sugar, cocoa, golden syrup and vanilla. Microwave for a minute or two until everything is melted. Stir in apple sauce.

Place biscuits in a paper bag and bang and crush with rolling pin til in small pieces. Add to chocolate mixture with the pecans and cranberries. Mix well.

Spoon into a lined slice tray (18 x 28cm) and flatten with the back of your spoon. Refrigerate for at least a few hours before cutting into small squares. Keep in fridge.

Gooseberry Fool (work in progress)
adapted from Albion Cooks
Makes a small quantity – for about 2 people?

Trim the tops and tails from gooseberries and discard. Place trimmed gooseberries in a small saucepan and cover with water. Add the sugar and bring to the boil. Simmer for 5-10 minutes (I did 5). Here the recipe says to drain off half the liquid. I didn’t do this and regretted it. Strain gooseberry mixture through a sieve. Taste and add sugar if too tart – I added honey but the flavour was quite dominant so next time might just add sugar. Cool. Fold yoghurt into mixture and serve in parfait glasses or ramekins. Or pour over hedgehog if it looks just like sauce.

On the Stereo:
Scott sings songs from his tv series: Scott Walker