Muffins at the tennis 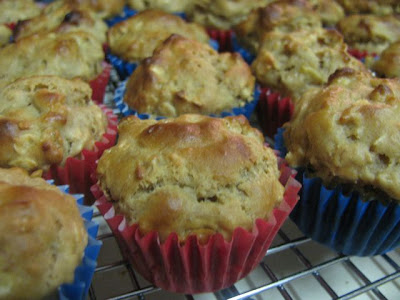 Last Tuesday I went to the tennis with my dad, two of my brothers (Andy and Paul) and Andy’s wife Erica and some of her family. It is the first time I have been to the Australian Open so I found it interesting to see an event that I have only watched on the television before. I had felt a bit unsure of whether I should take food of not but in the end I was glad I did as I was not impressed with the food on offer.

The night before I had made some banana, peanut butter and oat muffins that I saw Mangocheeks make on Allotment 2 Kitchen recently. I liked the sound of the recipe because I had all the ingredients in the house. Sylvia has been eating banana and cereal every morning but I don’t eat a lot of banana so often I put little banana offcuts into the freezer. I have never frozen banana before. They looked like bits of Dr Who alien but seemed ok in these muffins. However I was most displeased that they left marks on the bench from the dark liquid that oozed out of them as they defrosted. 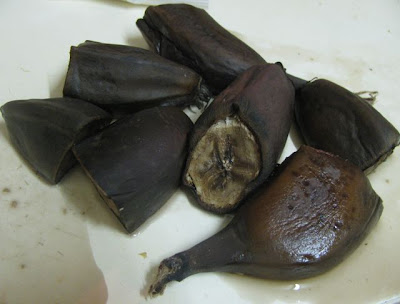 These muffins were excellent fresh and most enjoyable for the next day or two. (But be warned that I left a couple for a week and when I tried them again they were inedible.) Mangocheeks sprinkled cinnamon and sugar on hers but I misread the recipe and put cinnamon in the muffins instead. I liked her comparison of the taste to sticky toffee pudding. They are very dense and oaty rather than soft or sticky but the combination of banana and maple syrup does make for a toffee flavour. 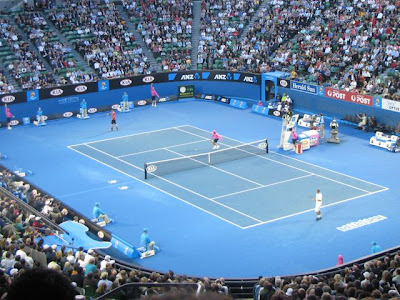 If I was more organized I might have made some burgers or nut roast. I also wondered if I should waste too much energy because I was concerned about if I could take food in, remembering being made to give up my water bottle at an outdoor gig a couple of years back, but the tennis centre staff were more interested to check if I had a glass bottle. In the end I chopped up some carrots and cucumber, and bought some cherry tomatoes and cheese flavoured biscuits. For sweets I took the muffins and grapes. I had meant to take nuts as well but forgot. Luckily there were some nuts in my muffins so it felt like a healthy selection of food. 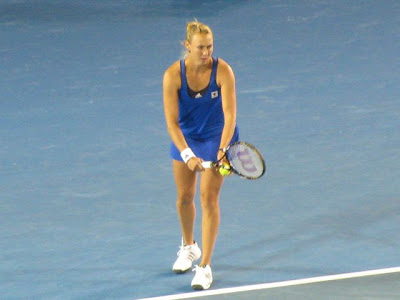 We had night tickets to the centre court, which is known as the Rod Laver Arena. The matches that evening were Lleyton Hewitt vs Ricardo Hocevar and Julia Coin vs Alicia Molik. Hewitt won so easily that it was a bit disappointing. Babies and public transport meant that we had to leave midway through the women’s match in which the local girl (Molik - pictured above) lost. In some ways it wasn’t the most thrilling tennis but in others it was a great treat to see some of the world’s best at play. I love being able to watch the full view of an event without being directed by the television cameras. 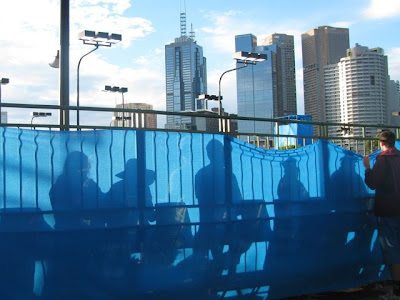 The rules of the centre court were that we could only leave or enter every time the players changed ends. Most of the time we stayed in our reserved seats. I didn’t take any photos of my food as I was in a rush to leave home and then it was too awkward juggling my food in my seat to have a camera in the mix. But it was good. At one stage I went for a walk to look at if there was any food of note. Kudos to Flavours of Victoria for selling fruit and gluten free biscuits but I was after savoury food. Vegetarians could have sushi, margherita pizza, a pita wrap or chips. I couldn’t be bothered with the queues and went for the hot chips. It just made me glad I had some decent food in my bag. 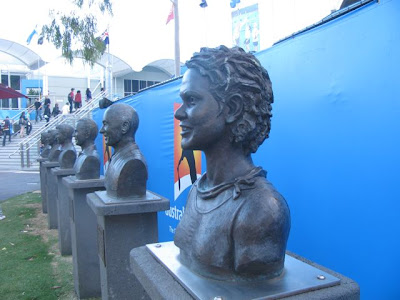 More enjoyable was a chance to get a sense of the rest of the tennis centre. There are so many smaller courts that I found them overwhelming but I enjoyed wandering around them. I found a pleasantly relaxing atmosphere among the crowd at the courts and in garden square. I also loved the busts of former tennis players, many of which I recognised from being a tennis lover in my childhood. (Do you recognised Evonne Goolagong closest to the camera?) When we left they looked a little spooky with the floodlights lighting up their faces from below. I was glad to get home where Sylvia was refusing to sleep till I arrived.

Preheat oven to 180 C. Line mini muffin pan with paper cups. Mix the flour(s), oats, brown sugar, baking powder, cinnamon and salt in a large bowl. In a small bowl or jug, use a fork to lightly whisk together the peanut butter, milk, maple syrup, egg and mashed bananas until well blended. Pour the wet ingredients into the dry ingredients, and gently mix until just combined. Spoon the batter into the prepared muffin cups. Bake in oven for 20 minutes or until golden and a skewer inserted in the middle comes out clean. Cool on a wire rack. They will last about 3 days in an airtight container.

On the Stereo:
The very best of Crowded House
Posted by Johanna GGG at 15:46