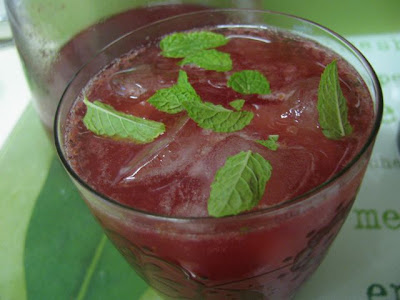 New Year's Eve was exhausting this year.  I spent much energy keeping Sylvia and Zinc apart.  Sylvia crawls towards Zinc with her eye on grabbing the tail or fur.  Zinc doesn't stay away as a wise cat might.  I have visions of Sylvia tugging too hard and Zinc swiping her with the paw.  Meanwhile E was poorly and when I went out to the shops, I returned to find him lying on the floor with Sylvia.  The heat was unbearable and by evening gave way to rain so heavy and loud that I couldn't hear the television.  Oh, yes, I didn't have energy to do other than watch tv.  And eat haggis nachos and drink raspberry punch. 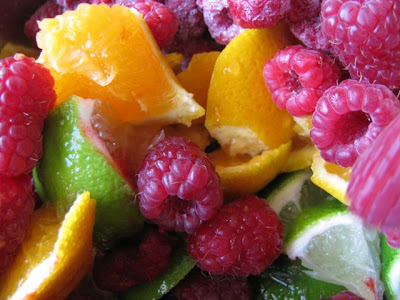 Fortunately just before New Year's Eve that I found the recipe for Raspberry Lemonade on Cherrapeno.  It was raspberries, sugar amd lemon.  Quite similar to Kristy's Raspberry Lemonade.  Kristy had been inspired by a drink she had in London.  I was inspired by an orange and raspberry juice that I had in Scotland (M&S) to try this.  But as I am not that fond of lemon I used lime instead.  I also changed the quantities but if I had more rasbperries on hand I would make more. 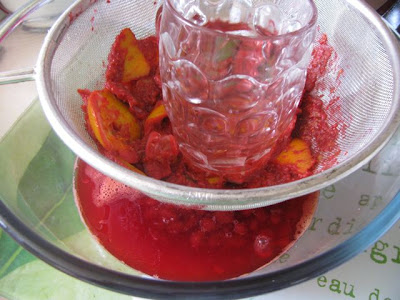 I was concerned that E needed a cool sugary drink to keep him hydrated as he was off his food.  This seemed like a good option.  The recipe called for either still or sparkling water but we love our soda water so there was no question of still. 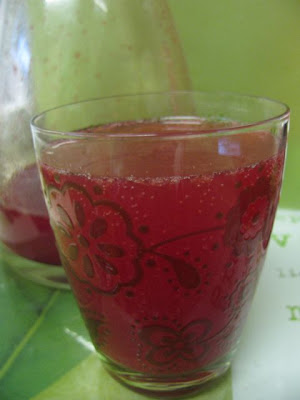 I hadn't planned to make a drink but I was glad that I was inspired by Nic.   In my days before blogging I usually just bought a bottle of lemonade or ginger beer but it is fun making a special drink for an occasion. 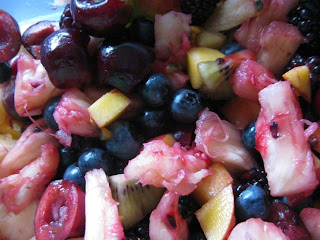 I also made fruit salad with a bounty of passionfruit, cherries, pineapple, blueberries, blackberries, and kiwi fruit.  The photo doesn't do justice to how refreshing it was.  E was very pleased with the punch and the fruit salad but most of all he loved the haggis nachos.  If I had time I would share these now but it is late, Sylvia wont sleep, and I am trying to use blogger's new editor which is doing my head in with the photo editing.  So I will leave you with the punch recipe.

Place raspberries, water, sugar, orange and lemon in medium saucepan and bring to the boil, stirring frequently.  Turn off heat.  The recipe said to cool and strain but I strained the syrup and then cooled it.

To serve, fill a quarter of a glass with syrup.  Fill three quarters with soda water and ice.  Garnish with mint leaves.