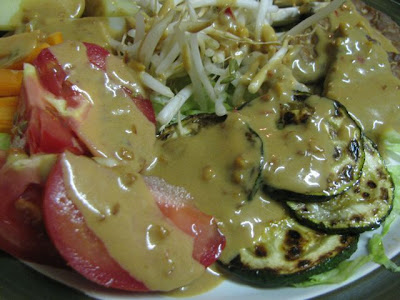 It was a hot couple of days earlier in the week. On Monday it was 43 C and the minimum temperature was 30.6 C overnight, which matched the hottest night on record in Melbourne’s history in 1902. Sylvia splashed about in her baby bath in the kitchen, I counted down the (4) hours til my orange and cranberry juice icy poles would be frozen enough to eat. Aren't the little jewel moulds cute! 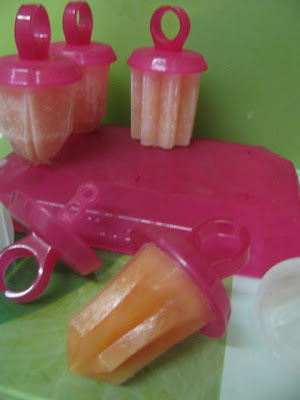 For dinner I made gado gado, an excellent Indonesian dish for all lovers of peanut butter and vegetables. It feels right for a hot summer night. Plus, I bought a huge tub of peanut butter and was compelled to use it. I was glad that we had enough leftover for the next night because Tuesday was almost as hot. I wasn’t about to go out to the shops until the cool change arrived.

It was wonderful to throw open the windows and door later in the day to let the cool breeze in. Suddenly the languid hush gave way to the sounds of clinking plates and lively chatter from neighbouring houses. Ironically I stood in the rain that evening and hung out the washing while Zinc sheltered under the table. Being stuck inside in the heat makes one determined to go out once it is cooler. Rain will not stop us. The clothes were dry by the next morning anyway. 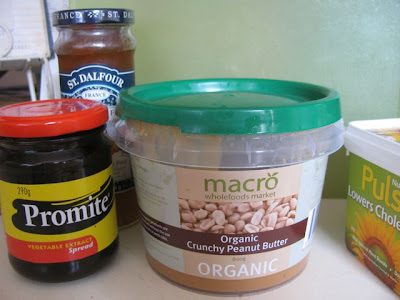 Gado gado is as easy as drying the washing in a heatwave. It is the sort of meal you can adapt depending on what is in the fridge. Before posting this version, I thought I should read up on traditional gado gado on Wikipedia. Simply described, gado gado is a peanut sauce over vegetable salad. Traditionally the sauce has peanuts, sugar, lime juice, chillis, tamarind and shrimp paste, and the salad has shredded green vegetables, bean sprouts, boiled potatoes, boiled eggs and fried tofu and tempeh. It also says that ‘authentic gado gado does not have carrots and tomatoes.’

It was no surprise to find that my sauce was not authentic but I had thought my spread of vegetables was fairly similar to those I have had in restaurants. According to Wikipedia these weren’t authentic because they included tomato and carrot. My addition of fried tempeh, boiled potato and beans sprouts would have got the approval but the fried eggplant and zucchini probably would not. Though I must have done something right with the eggplant because E ate it all up rather than pushing it to the side of his plate. 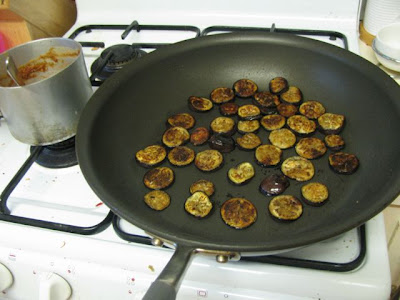 As for the sauce that I made, it is far from traditional. Some time ago I saw a suggestion for peanut dipping sauce made with soy, chillis and marmalade. I have a jar of my mum's marmalade that doesn’t get enough use so I tried it. The sauce was lovely but I did need to be a bit heavy handed with the soy to balance the marmalade. In future I might try to use less marmalade and soy. But I like the idea. Wikipedia suggested serving it with rice but I don’t usually do so. 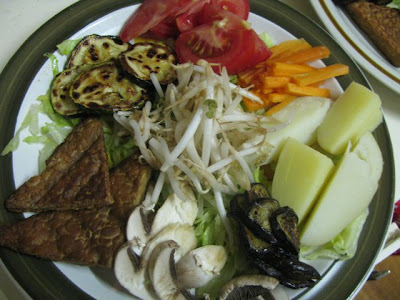 I have written what I did below. However this is one of those recipes that I use what is on hand. Sometimes I add lemon juice and sweet chilli sauce rather than marmalade, or add onion at the start or coconut milk instead of water. I have added in cucumber, which I didn’t use but would have if Sylvia hadn’t eaten it all. I am not at all traditional but find it a relaxed dinner for hot summer nights. It is delicious and is suitable for those who are gluten free (if you use gf soy sauce) and vegan.

Fry tempeh, eggplants and zucchini in a large saucepan in oil over medium heat. It took me a while for the tempeh to crisp up – maybe 20-30 minutes and then I fried the vegetables separately because I didn’t have enough room.

While tempeh, eggplant and zucchini are frying, make the sauce: heat oil in a small saucepan and fry chilli and garlic in it for about 1 minute. Add remaining ingredients and stir till creamy and warm. If not using right away, only add 1 cup water and add the remaining half cup just before serving so it is quite a thin sauce.

When tempeh, eggplant and zucchini are fried, arrange all the salad ingredients on dinner plates. Drizzle sauce generously over salad.