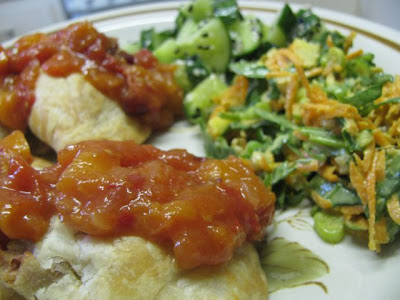 Summer is the glorious season of stone fruit. Last summer I discovered the joy of preserving stone fruit in chutneys with my apricot chutney and plum chutney. This year I have been meaning to repeat the success but haven’t managed it. However I have continued to find other ways of preserving such luscious fruit thanks to the blogosphere. 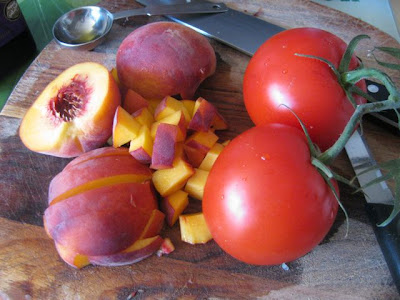 When Tahn posted about a wonderful tomato and peach relish. When I commented that I wanted to make the recipe, she kindly posted it. As always I wanted to make it straight away and even made sure I had the tomatoes and peaches. But I got busy. Then I decided to serve the mushy pea pastitsi that my sister’s partner’s mother made. (Thanks Fran and John). They are sort of like Maltese pasties. They needed chutney. 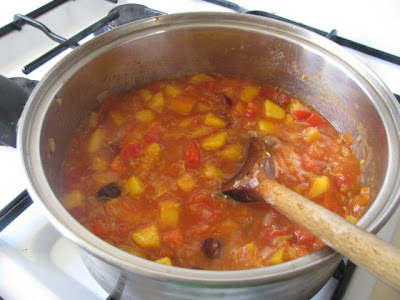 Although it was a relish, which I think means it is less cooked, I let mine get mushier than the recipe suggested, and I have no regrets. So it reminded me of a chutney. I just kept it in a tub the fridge for about a week, as the recipe suggested, but I think I could have bottled this and kept it longer. When we finished it tonight with nut roast I wished that I had made twice as much.

We had the pastitsi with a salad of grated carrot, walnuts, spring onion, fresh pineapple, spinach and soy mayonnaise, and a cucumber salad, which was too garlicky – possibly because the garlic we have had lately seemed intense when raw. 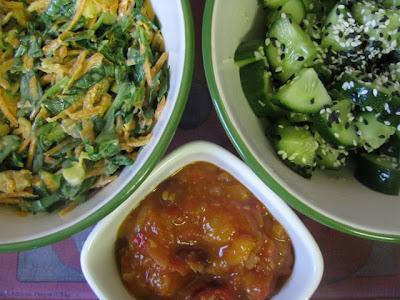 I made a few changes to the relish. I didn’t have sultanas. I thought I had cranberries but even that stash was low so I added a few dried apricots and goji berries. I keep my ginger in a jar of vinegar in the fridge and every now and again have some ginger infused vinegar to use. This relish seemed a good use for it even though there wasn’t any vinegar in the original recipe. And it was mushy.

It was one of the most delicious relishes or chutneys I have had for some time. Possibly the best since last summer because I always love any chutneys with stone fruit. But it was also quick and easy. And did I mention it was delicious. Sylvia even ate a little rice with this chutney mixed through it. I t was so good I could have eaten it by the spoonful. Yet another recipe I want to return to every summer if not more often. 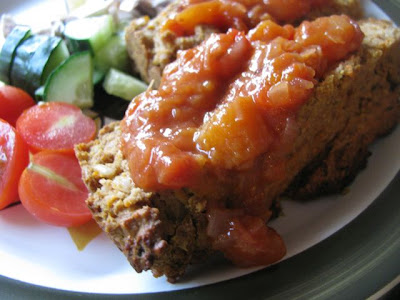 I am sending this Tomato and Peach Relish to Rachel of The Crispy Cook for this week's Weekend Herb Blogging (#218) which is hosted by Haalo of Cook Almost Anything and was founded by Kalyn of Kalyn's Kitchen. This relish is a wonderful way to enjoy tomatoes and peaches when they are in season.

Tomato and Peach Relish
adapted from 1000 Vegan Recipes via Seitahn

In a large saucepan, heat oil over medium heat and add onion and cook for about 5 minutes or until translucent. Add remaining ingredients and bring to a boil. Simmer over low heat, uncovered, for 10-15 minutes, stirring occasionally. The recipe said the tomatoes and peaches should be tender, not mushy, but I let my tomatoes collapse, possibly because my peaches were not as ripe as they should have been.

Taste, adjusting the seasonings if necessary, then simmer, uncovered, over very low heat for another 5 minutes. Cool in a bowl and serve at room temperature. Mine kept in the fridge for a week.

On the Stereo:
Music for Sound Healing: Stephen Halpern