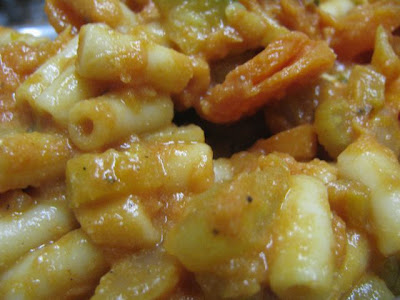 Finally Sylvia is willing to try more food, though some of it still falls from her mouth to the ground in dislike (and others land her in the emergency dept of the Royal Children's Hospital - nothing a bit of play and sleep couldn't fix - but that is another story). I tried buckwheat pasta a while back and she wasn’t keen. But last weekend she tasted her first wheat pasta and loved it. Her food inspired me in making a stew for our own dinner.

I still expect Sylvia to spit out any new food. I had decided to serve the pasta with pumpkin, which she likes, rather than tomato sauce, which she has never tried. I am trying to introduce her to dairy so decided some ricotta would help her get used to creamy food but I also added a sweetener (literally) in the guise of apple puree. To my surprise she lapped it up, though on the first night I had a good laugh when she would only eat it from E if he fed her by hand rather than using a spoon. 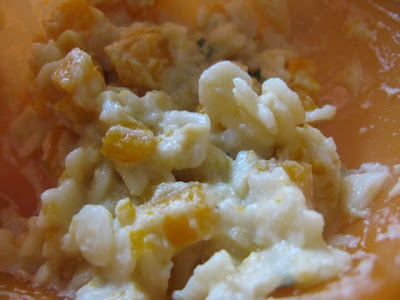 When putting away her baby pasta, I found some macaroni noodles at the back of the pantry. I had a bunch of unused celery that I had bought on special in a whimsical moment. I sometimes want to buy celery but don’t know how to use it as I generally use it frequently but not in large proportions. It is rarely the star of any dishes I make. I decided to use it up in a minestrone-style stew. The results were as pleasing as Sylvia eating her dinner. The celery didn’t overwhelm the stew but it added to the flavour. 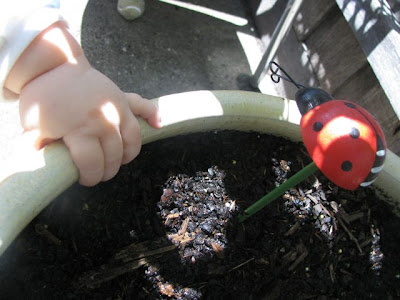 I wasn’t going to blog this recipe as it is one of my lazy sorts of meals that I just throw in what is about. Hence my lack of photos. However, I often feel stuck for ideas about using up celery and this was such a good way to use it up that I thought I should have it here to remind me next time I see it on special.

Above is a gratuituous photo of Sylvia at play in the garden. She seems to like food off the floor best of all and I suspect if I told her to just eat the dirt out of the pots she would! I am sending the stew to Ruth of Once Upon a Feast who is hosting this week’s Presto Pasta Night (No. 149).

Cook pumpkin and pasta in boiling water for 10-15 minutes until soft. Drain but reserve water in case you need to thin sauce. Stir in ricotta, apple puree and basil. Add a little water to get a sauce consistency.