A vegetarian Christmas dinner in Scotland 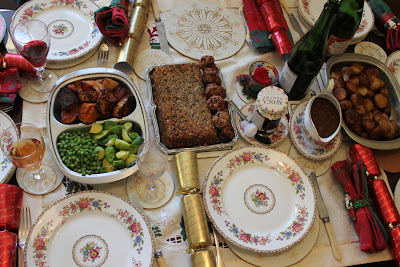 On the weekend I cooked a vegetarian roast dinner to share with E's family while we were in Edinburgh.  It was a challenge but a pleasant one.  I rose at 7am to get an early start.  For an hour I did some blogging.  Sometimes you need time to prepare mentally.  ("I am one with the Christmas dinner!")  Finally I began and by the time E came into the kitchen I was in tears.  You see, I had just finely chopped 4 onions. 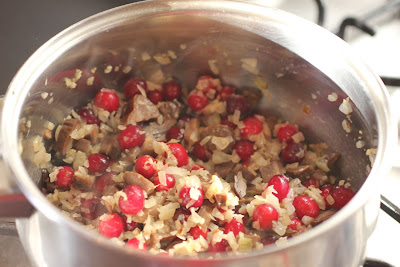 I firstly got the onions frying for the gravy.  It was the first thing I got done.  I wont give a recipe but it had butter, red onion, flour, stock cube, water, honey, red wine.  Once set aside, I started on the cranberry chestnut stuffing balls.  I just couldn't resist a recipe that used fresh cranberries (mine were frozen to keep them longer) and vaccum packed chestnuts, both being ingredients that are hard to find in Australia. 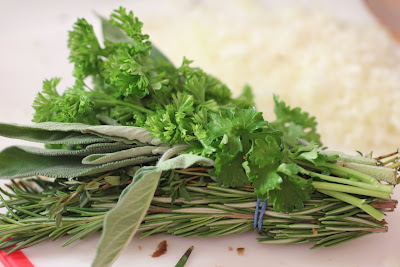 British supermarkets aren't great at offering food that is fresh and local.  They are great at offering conveniently packaged food.  I loved being able to buy a bundle of parsley, sage, rosemary and thyme.  They should call it the Scarborough Fair package.

The stuffing balls were a bit boring but really perked up with some gravy and cranberry sauce.  They were a nice nut roast accompaniment, and a pretty addition to the table.  Once cooked they didn't look like raw meat like the raw ones below.  It is the first recipe I have made where the cranberries are not all sweet. 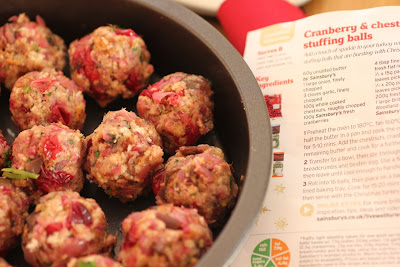 As well as getting the gravy underway early, I wanted to start roasting the potatoes and pumpkin early.  Upon finding that I only had butter to roast the vegies, I sent E out to buy olive oil.  I worried that if I used too much butter for the dinner, I would be held responsible for skyrocketing cholesterol levels.

Coordinating everything was a challenge while trying to get Sylvia to eat some breakfast.  At one point I put a saucepan on the hotplate and forgot it while I was talking to Sylvia.  I remembered it just as it started to smoke but before it was burning.  E went out a second time with Sylvia to give me some peace. 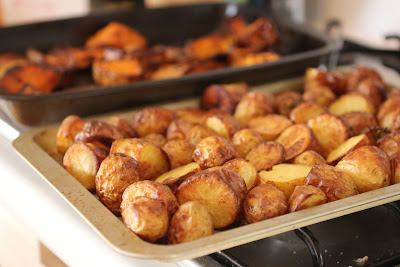 The other challenge in making the nut roast was the lack of a food processor or blender for the nuts.  I also discovered at the last moment that it was meant to have chestnuts.  My amounts were quite different to the recipe and I didn't blend it all up as directed.  I used some hemp seeds because they were so cheap compared to Australian prices, though I realised these were crunchy seeds, rather than the soft hemp hearts I had tried back home.

At the last moment I (wisely) decided I didn't have the energy for the filling of fried onion, courgette, and red pepper mixed with stilton.  I was very pleased that, despite my changes, the nut roast sliced up very nicely and was very tasty.  E was relieved that the stilton did not dominate. 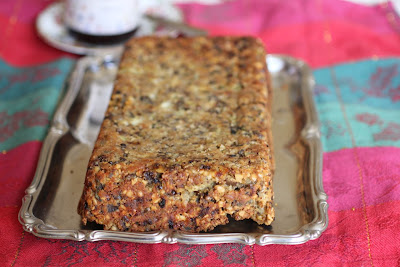 Once the nut roast went in the oven I realised I had spent 3 hours cooking and needed a shower and to get the house in order. At least we haven't had too much time to make a lot of mess in a holiday flat.  I had been relieved to find that the gatefold table in the corner opened up into a large table to accommodate everyone.

The flat had a beautiful dinner set, gorgeous serving dishes and even a gravy boat.  My sister in law loaned us some Christmas linen.  I'd bought cranberry sauce in Avoca in Dublin.  A bit of tinsel, some crackers, and Sylvia's tealight holder that she made at the school fete all added to the festive feeling. 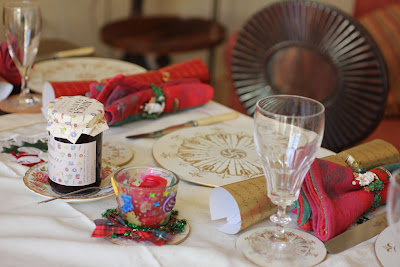 By the time E's family arrived, I had found a mismatch of chairs to put around the table, some rugs were under the table to protect the carpet, the table was set and our mess was cunningly hidden.  The food was reheating in a low oven.  I felt like a domestic goddess.  Phew!  Oops, I hadn't prepared the brussels sprouts and peas.  That was easy enough. 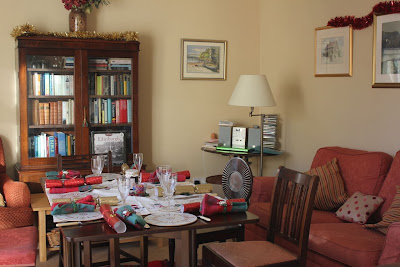 Everyone was in good spirits.  E's Aunty Anne was pleased to be able to taste a nut roast and E's dad and sister are big fans of the nut roast.  HH has made a few nut roasts using the recipe I used on my last visit to Edinburgh.  She was most helpful in getting all the food ready and on the table. 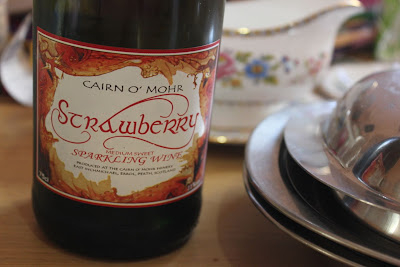 While we got everything into serving dishes, E served the Cairn O'Mohr sparkling strawberry wine (alcoholic) and sparkling elderberry wine (non-alcoholic) from the Edinburgh Farmers Market.  We took the obligatory family photos, pulled our crackers, put on the silly hats and tucked into the Christmas dinner.  Everyone was very appreciative of the meal. 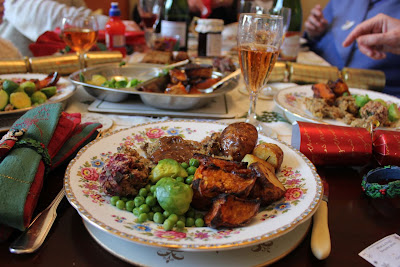 After dinner, Sylvia put on her santa hat and santa jacket to help give out some presents.  Barney got a game of battleship from Anne and had lots of fun playing against various people.  Gabriel put on his t-shirt that we gave him and Sylvia had lots of fun with Florence's new play money fro Australia.  Sylvia got a new George pig with a little hook so we hope she wont lose this one. 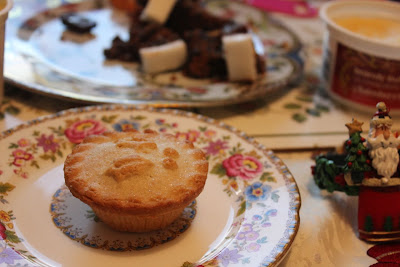 Then it was time for something sweet and a cuppa.  E's nephew Barney had won a hamper in the school fete raffle.  So his folks brought over Christmas cake and Christmas coffee from the hamper.  I found some shortbread in the cupboards, and had bought some mince pies and brandy butter.  At the last moment I wished I had some chocolate offerings and broke up a block of raspberry chocolate.

Before we knew it, Anne had to take the train home.  Our flat has a lovely window over a wee burn.  It was glorious when the sun was shining but the darkness falls so early here (3.30pm).  After she left we kept drinking tea and coffee.  Then we did the Observer Food Monthly quiz with E being a stern quizmaster.  A great afternoon of good food and fun.  We now feel well rehearsed for Christmas Day.

Heat olive oil in a large frying pan.  Fry up onion, garlic and celery for 5 to 10 minutes until cooked.  Transfer to a large mixing bowl.  Add remaining ingredients and mix well.

Tip mixture into the prepared loaf tin.  Bake for 25 to 30 minutes (I think I did more than this - probably 45 minutes.)  Rest for about 5 minutes and turn out onto a serving plate.  Serve in slices.  It maybe crumble slightly but not too much.

Melt butter in a large frying pan.   Fry onion for 5-10 minutes until cooked but not browned.  Add cranberies and chestnuts and fry another 5 minutes.  The recipe card wasn't clear but I think it was meant to get the cranberries softened but keeping their shape and not breaking down into a sauce.  Transfer to a medium mixing bowl and mix well.  Roll into golf ball sized balls.  Place on a greased or oiled baking tray.  Bake about 15-20 minutes at 180 C.  (Again I think I might have baked mine longer and they were fine.)

On the Stereo:
BBC Scotland - country dance music
Posted by Johanna GGG at 08:41