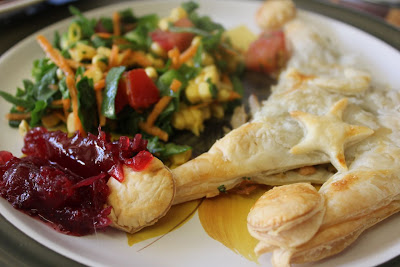 Goodness life has been busy!  We are finally catching our breath.  Christmas Eve was probably the busiest day.  After the heatwave, I got stuck into my Christmas cooking.  You can see most of it spread out on the table below (after I cleaned up in the evening).  Nut roast, cranberry nut rolls, panforte, coconut ice, festive mushroom pie, and mince tarts.  Plus a glass of Delia's festive punch to get me through. 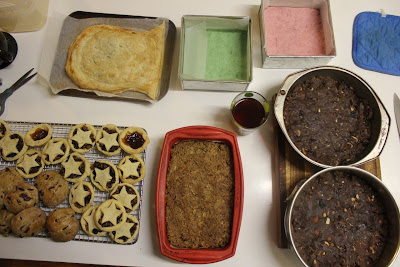 We started the day slowly and got to the supermarket mid-morning, battling for a car park, filling the trolley, avoiding all the tempting festive treats, despairing at lack of hazelnuts, walking over the Fat Harry's for wrapping paper after finding that the supermarket only had horrid Disney giftwrap left. 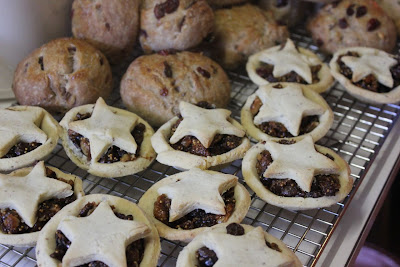 We got home and ate lunch on the run as I started on the cranberry nut rolls.  They never rose as much as last year, despite letting them rise for about 2 and a half hours.  Yet they were still soft and delicious.  I substituted macadamias for hazelnuts in the panforte.  I covered myself with cocoa when opening a new packet.  My brother rang as I was assisting Sylvia to crack open an egg. 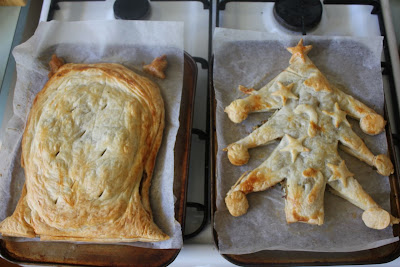 One way to cope with so much baking is to use tried and true recipes.  One of my favourite Christmas cookbooks is Rose Elliot's Vegetarian Christmas.  I made a flaky mushroom pie from it a couple of years before I was blogging.  It seemed a good easy recipe that would use up some of the puff pastry in the freezer.

I added a handful of chopped cashews to the creamy mushroom filing.  They were an unnecessary addition.  My pies looked less impressive than last time because I made two rather than one big one as I was using my biggest tray (though I now think I used a swiss roll tin last time).  It was still fun to make. 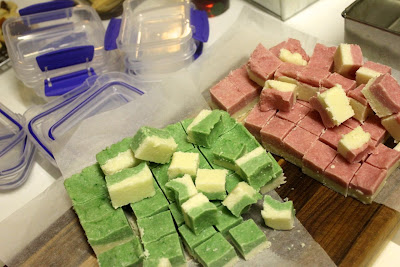 Dinner was a simple affair on the knee in front of the television.  I didn't have time or energy to clear up the kitchen.  It was just lovely to sit down.  I didn't care where.  We watched the film Nativity.  It was a bit silly but had was full of Christmas cheer.  Then we watched Outnumbered.  After wrapping presents with Sylvia and getting her to bed, I felt quite sympathetic to the parents in this sitcom. 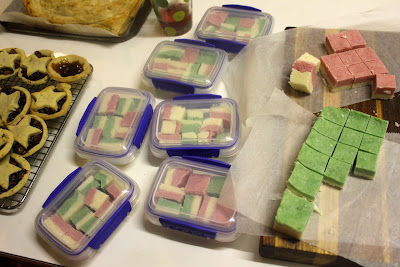 Sylvia was just lovely in her excitment about Santa Claus.  Not that it helped her to settle into bed.  She did decide to leave out cherries as well as a mince pie and ginger beer for the jolly old man.  It is good to see she is making sure he eats well.  She also threw a carrot into the front yard for the reindeers.  Earlier in the day she had dictated her letter to Santa to make sure he brought her something little and tiny. 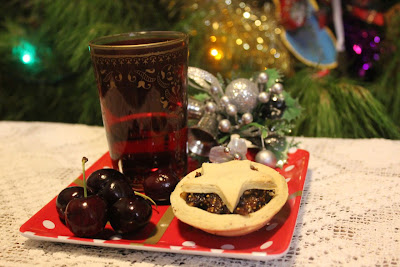 Once she was in bed, I cut up the coconut ice for gifts (having stumbled across the excellent idea of giving them in tubs that could be reused), wrapped the last of my gifts, cleaned up the kitchen and set the table for Christmas breakfast.  A busy day but by the time we went to bed, I felt well prepared for Christmas day.  I'll post about the day separately with the recipe I used for mince pies.  Hope your Christmas day went well.

Melt butter in a large frypan.  Fry onion for about 5 minutes and then add garlic and mushrooms.  Fry over medium high heat until the liquid has gone.  This can take up to 30 minutes.  Remove from heat and add rice, cream cheese, parsley, lemon rind and juice.  Season to taste.  The recipe says to chill but I just left mine in the frypan while I prepared the pastry.

The recipe said to cut out a tree shape on a piece of card (approximately 12 x 8 inches).  I did this on the pastry.  I did find that the top should be slightly bigger than the bottom piece so it will fit over the filling.

Place the bottom tree shape of pastry on a greased or lined tray (I used two smaller trays to do two pies because my large tray was in use but in retrospect I think the first time I did this I used a swiss roll tin).  Spoon filling onto the pastry, leaving a little space around the edges.  Brush egg over the edges and place top piece of pastry over the bottom.  Use the scraps of pastry to cut out shapes to decorate the pie to make it look more like a Christmas tree.

Bake pie for about 30 minutes at 200 C or until pastry is golden brown.  Serve warm.  Keeps a few days in the fridge and can be reheated in the oven if you want to make it ahead.

On the stereo:
White Christmas: Bing Crosby
Posted by Johanna GGG at 21:06