Edinburgh Larder and the National Museum 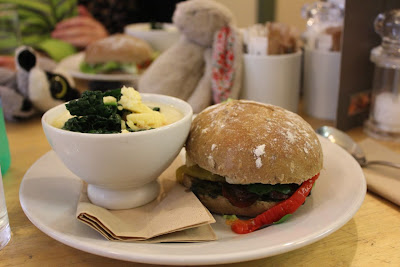 After a stressful morning in Marks and Spencers (I lost E, we queued for ages for scones, we spread jam with a fork!), Sylvia and I arrived early at Edinburgh Larder to meet Jacqueline of Tinned Tomatoes and her wee boy Cooper.  The place was full.  How awkward!  We had only met online so there is always a slight anxiety about meeting a bloggers in the flesh.  When Jac and Cooper arrived, a table became available and everything seemed easy and natural.

I had expected Edinburgh Larder to be half food store and half cafe.  Instead it is mostly cafe with a small area dedicated to local food products such as oatcakes and preserves.  The menu is mainly soups, sandwiches and quiches.  Jac and I ordered the parsnip, kale and cheddar soup accompanied by a sandwich. (My sandwich had brie, peppers and chutney, I think.)  Everything was fresh and made with quality local ingredients, though my soup could have done with a bit more seasoning. 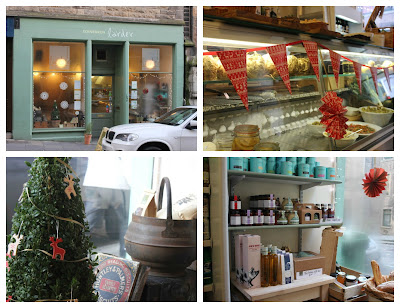 E arrived just after me.  (We had found each other in Marks and Spencers but he had stopped at a charity shop on the way.)  He was amazed at the place because when we lived in Edinburgh it had been a cafe called Lianachan.  It was a venue for E's solo gigs but looked very different.  He was less impressed with his sandwich than me.  Sylvia had oatcakes and a wonderful tasty crumbly cheddar cheese.  Cooper had porridge. 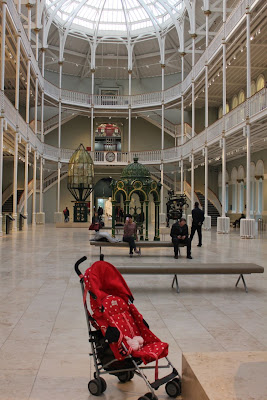 Upon leaving Edinburgh Larder I was more focused on buying granary bread and oatcakes than on the stroller in the corner.  I didn't get far with Jac, Cooper and Sylvia before realising I had left the stroller behind.  I retrieved it and we went to the National Museum of Scotland.

The Museum was not open on our last visit to Edinburgh due to renovations.  I was most impressed, but then who could fail to be impressed with such a magnificent Grand Gallery.  If I had visited with E (who was off shopping) I am sure we would have stopped for a cuppa at the cafe on the first floor balcony and enjoyed watching the people down below. 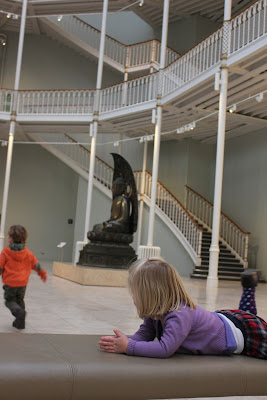 Instead we spent a lot of time shepherding Sylvia and Cooper, mainly through the Animal World (below).  Jac was great at finding activities to keep the kids amused in the museum.  Both our children's lives have been documented on our blogs so it was just gorgeous to see them playing together.

Jac was one of the first bloggers that I started exchanging comments with when I began blogging about 5 years ago.  I was drawn to her vegetarian recipes firstly and then found she was both generous and entertaining.  It was lovely to be able to chat with her in the flesh - well as much as we could with two small children demanding our attention. 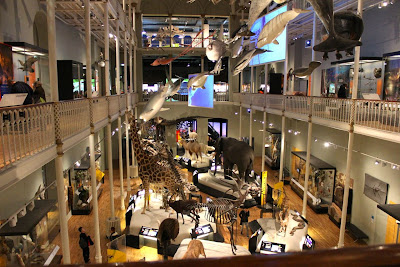 After we had finished at the museum and swaddled the kids in the winter woollies to go outside, we headed to the nearby Elephant House cafe (which I blogged about on my last visit).  E rejoined us and we met up with Chele of Chocolate Teapot.  Chele is a more recent blog acquaintance but has struck me with her kindness, as well as resonating with me as an Aussie expat in Edinburgh.  I wasn't surprised that she was as lovely in the flesh as in the ether. 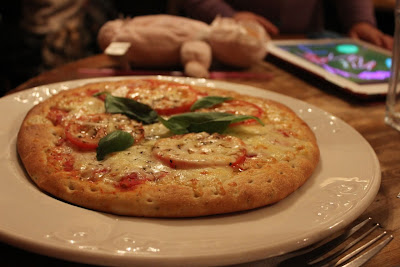 I ordered a margherita pizza to share with Sylvia, hoping she might eat a plain topping of cheese and tomato.  She didn't eat much, but then she had a little friend in Cooper to distract her.  E wasn't that impressed with it but I thought it ok.  We both were struck by the J K Rowling fan graffiti in the toilets.  Everyone loved seeing the fireworks at the Castle.  It was fantastic to sit sharing a cuppa with two lovely bloggers and great to be back at the Elephant House where I have some fond memories.