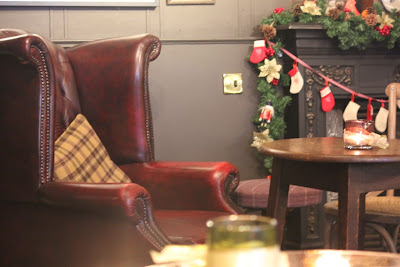 While in Edinburgh, E's sister HH kindly offered to spend a day with Sylvia so we could have a child-free day.  We were full of plans to take a train across to Glasgow but when the day arrived we were so tired from a busy weekend of seeing family that we decided to take it easy and have lunch at a pub followed by a movie.  A rare treat. 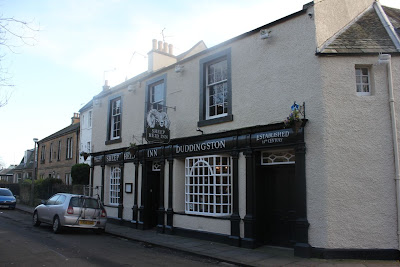 The pub in question was the Sheep Heid Inn, which I had wanted to visit for years.  It is in the suburb Duddingston that was once a separate village from Edinburgh and is well known for Duddingston Loch.  The Loch has been used for ice-skating and curling for centuries and is the location of the famous Skating Minister painting.  The Sheep Heid Inn markets itself as "Scotland’s oldest surviving public house. Est. 1360".  According to Wikipedia despite there being thought to be, though most of the current building is Nineteenth Century. 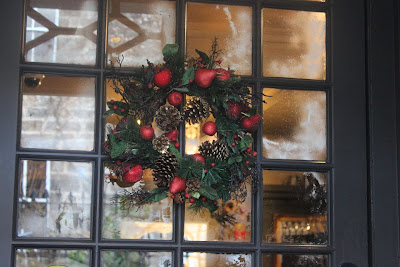 It is slightly off the beaten track so we took a black cab there.  If I had only known that the Twelfth Century Duddingston Kirk is only about 5 minutes walk away I might have taken a quick walk there first.  Even without the lure of the kirk I did feel the urge to wander around the conservation area that looked very beautiful. 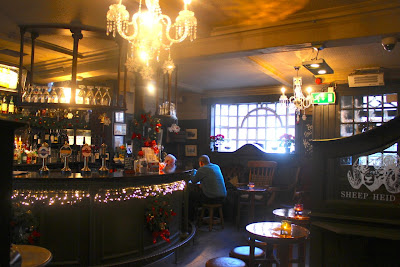 We were welcomed in by the wreath on the door and further delighted by the historic bar with its dark wood, comfy old armchairs and cheery Christmas decoration.  I was less impressed by the dining area which was a dull modern grey.  The photos on the Inn's website and a comment on Trip Advisor suggest that we were unlucky to have visited after the white walls with varnished wood dado was painted over.  It was very quiet on a Monday lunchtime, which did nothing for the ambiance of the dining room. 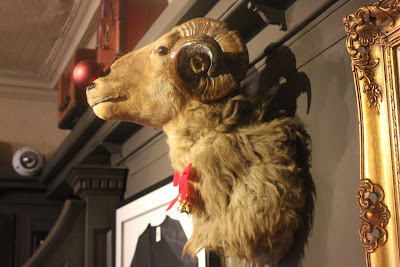 We had always referred to this pub as The Sheep's Heid.  E asked our waiter about it and he agreed that the name seemed wrong.  Apparently he had even asked management and pointed out Sheep's Heid in an old picture.  Every local I spoke to agreed.  Yet on the web and on the local historic information, all I could find was Sheep Heid.  (Would be interested to hear from you if anyone had more information on this discrepancy.) 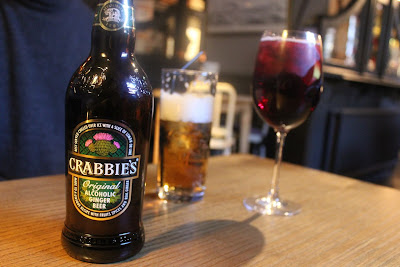 Our waiter was very pleasant but we were disappointed that there was mulled wine on the drinks menu but not available on our visit.  We both had fancied a warm spicy drink - and would have enjoyed the hot chocolate with cointreau or baileys if we weren't about to eat lunch.  Instead E had the Crabbies alcoholic ginger beer and I had the spiced sangria.  (If only they could have heated my sangria it might have tasted like mulled wine.)  My drink was lovely though I didn't finish the huge glassful. 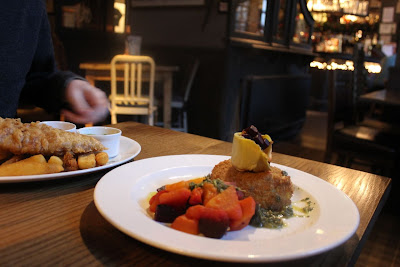 To eat E chose the fish and chips which he couldn't praise enough.  I ordered the "Crispy Potato, Squash, Olive and Truffle Cake with globe artichoke, roasted beetroot and home-made salsa verdi £10.95".  It seemed to be a crumbed potato croquette served with artichoke, beetroot, squash and a herb sauce.  This is not to denigrate it.  I loved the soft tasty potato with lots of fine vegetables and a wonderful fresh sauce. 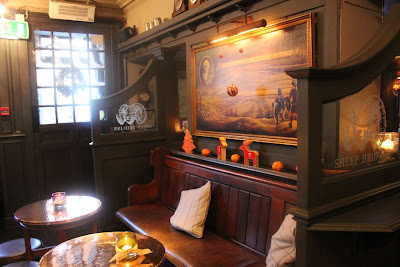 Without Sylvia to distract us, we were able to ruminate over the nature of Scottish pubs.  The grey dining room decor was disappointing in a pub that was renown for its history.  In addition the music was middle of the road American music such as Bruce Springsteen, Tracey Chapman and the Eagles.  It felt like it was designed by someone who either was unaware or ashamed of the heritage.

I got the impression that the management company was one that owned quite a few pubs rather than a local owner but have not been able to confirm this online.  However on this visit to Edinburgh, it seemed that many pubs are now run by big corporations that are simultaneously keeping pubs alive and whitewashing their history.  In the past I have much preferred the authenticity of British pubs to their poor attempts at cafes.  On this visit I found that the cafes were where the really exciting food experiences were rather than in the pubs which seem to be lacking heart.  And don't get me started on Scottish pubs that don't allow young children (but more on that in another post). 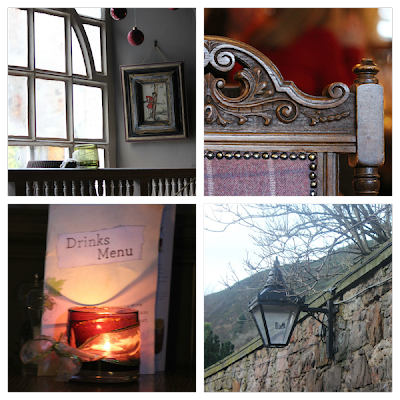 Despite the ambiance not being quite as I had hoped, I was glad to get to visit the Sheep's Heid Inn.  The food was of a high quality and it is an interesting place.  Sadly we didn't have time to sample the desserts or check out the skittle alley.

After the lunch we went to the top of Leith Walk to watch Skyfall.  I've not seen many Bond movies but this was a good one.  I loved the photography, the characters, the adventure and the self-reflectiveness.  (I could have done without the violence and sexism but then it probably wouldn't be a Bond movie.)  When it finished we enjoyed a quick look at John Lewis department store, especially the Cath Kidston section. Then it was time to return to Sylvia and hear about her day.