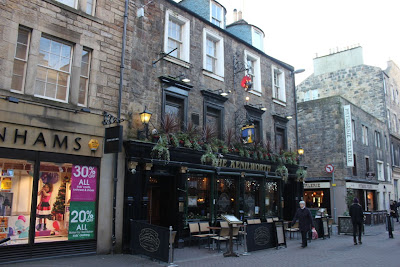 While in Edinburgh, we decided to go to the Winter Wonderland.  As is our way, we got out late, stopped for too long to eat and by the time we got there, it was late and busy so we gave it a miss that day and went back later.  At least we had a lovely lunch in the Kenilworth in Rose Street.  I had set my heart on a traditional pub meal and that is exactly what I got. 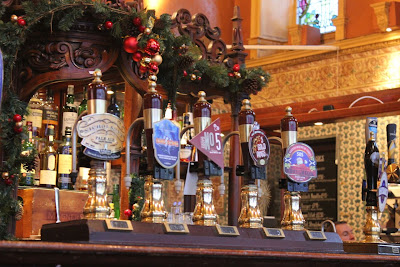 E often likes to remind me of what Irvine Welsh wrote about Rose Street.  As a tourist, you would think that a traditional pub wouldn't be too hard to find.  Not with a small child in tow.  We were refused entry to one because Sylvia was too young, and didn't even try a few others in Rose Street.

The Kenilworth beckoned us with a vegetarian-friendly menu, traditional Christmas decorations and the children's menu.  It is named after a Walter Scott novel, was originally built as a house in 1789, and converted to a pub in 1904.  (Check out the photos on Undiscovered Scotland as well as more history.) 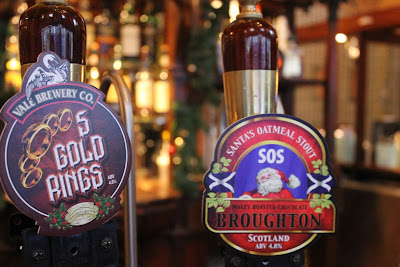 It was just the place for some traditional festive cheer.  It even served a beer called Santa's Oatmeal Stout.  I didn't drink any but loved these beer taps which we could see from our window seat.  Behind the ornate bar was a Christmas tree. 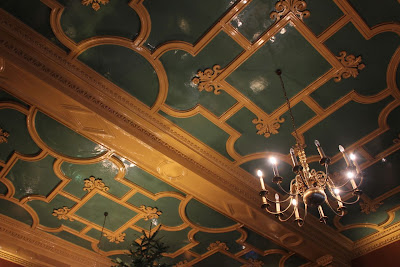 The ceiling was also a marvel to behold.  It hails from a time when craftsmen really were craftsmen. 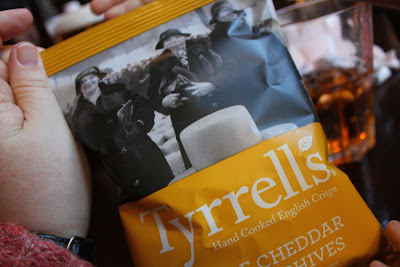 We were told there would be a wait of about 30 minutes.  We were in no hurry.  Our window seat afforded us much pleasure in people watching.  E went for a walk to find a weekend newspaper while Sylvia and I had a few crisps.  I loved the design on these Tyrrell's crisps.  Just lovely with the old fashioned black and white photos.  Made me feel like I was eating heritage rather than junk food. 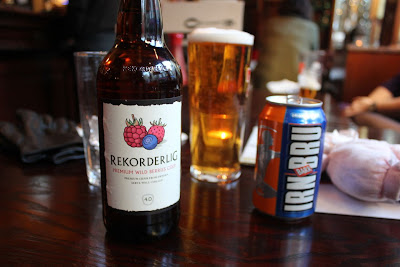 The crisps were washed down by a drink.  E had Tennants.  He thought this was the thing to do in Scotland.  I tried a rather sweet berry cider that was more an alcopop than a serious drink.  It went down easily.  Sylvia had Irn Bru.  She is addicted to the stuff.  Just as well we have left Scotland. 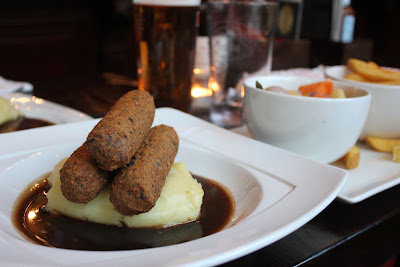 I ordered the vegetarian sausage and mash with gravy.  A good hearty meal for a winter's day.  Two sausages would have been enough.  A big of veg on the side would have been welcome. 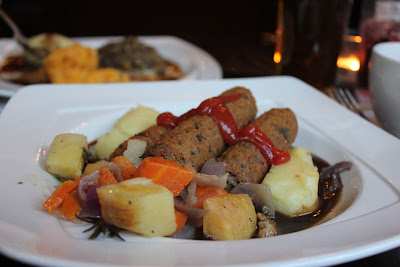 Fortunately I had little faith in the dish having many vegetables.  I ordered a side dish of seasonal vegetables.  I had hoped it might include a little green.  Alas it was just root vegetables.  (Are brussel sprouts too frightening for the general public?)  I was glad of the veg to eat with my rich meal. 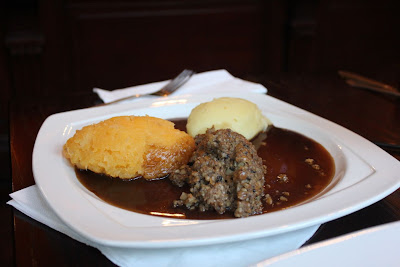 E chose vegetarian haggis, neeps and tatties. He was very pleased with them.  Sylvia predictably had chips.  All in all, we were very impressed with the Kenilworth.  It may be run by a pub chain but they still retain a great atmosphere and delicious food.  Not as cheap as grabbing a bite at the Highland Village food carts in the Winter Wonderland, but lovely to sit in a warm pub rather than out in the cold. 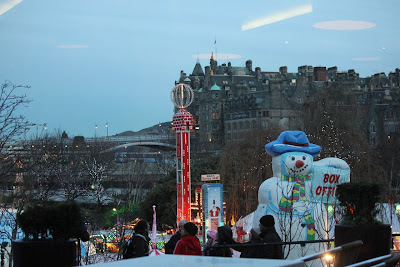 After lunch, we planned a mulled wine and stollen at the German Market but it was too busy to battle the crowds.  We decided to come back on a weekday.  Because we could.  Instead we went into the art gallery.  E couldn't find the paintings he wanted to see so we ended up having cake and a cuppa at the Scottish Cafe with a superb view of all the icy fun outside.  (We highly recommend the rocky road, the hot chocolate and the loose leaf herbal tea.)  Not the day we had planned, but not a bad one either!