A trip to Cramond 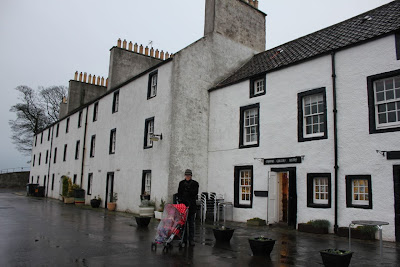 On a grey rainy day, we headed out to Edinburgh seaside suburb Cramond.  When I say seaside, I don't mean bathers, bucket and spade.  I mean a bleak lonely waterfront.  E tells me that in summer people walk their dogs by the River Almond and the Cramond Inn is busy.  Not on a wet winter's day. 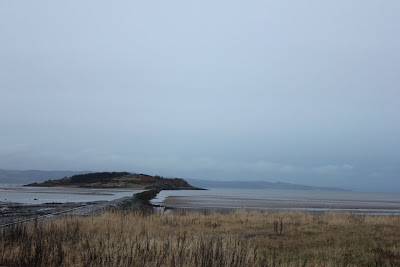 Buses are only about every 30 minutes and take quite some time to get to Cramond.  Once you are there, the old buildings are wonderful to look at but there don't seem to be any shops.  Only a handful of cafes and one pub.  Above is the Cramond Causeway.

E showed us many places from his childhood on the bus trip there.  When we arrived, he looked at the building at the top of School Brae that used to be a post office and corner store.  It now seems to be a residential house.  This was the only shop when he lived in Cramond as a child.  Unfortunately it was too wet to take many photos as we wandered about. 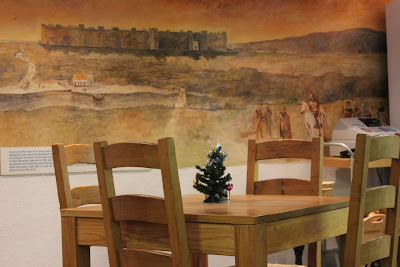 He had intended to show us the Roman ruins from the fort in Cramond.  Firstly through we decided to stop for lunch.  The internet was not our friend.  Originally we had planned to stop at Cramond Inn.  However we read some negative reviews and then saw great reviews for the Cramond Falls Cafe.  Well the cafe was not open so instead we ended up at the Cramond Bistro Falls for lunch.  It was nice but didn't offer the warming food we needed and we probably would have been better at the Inn. 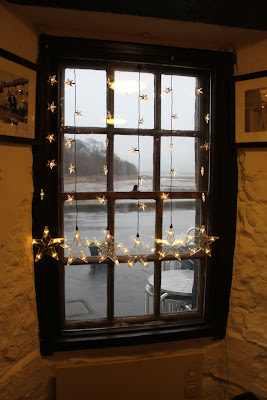 Whinge aside, it was a very charming old cafe.  (See top photo to see the exterior that is very smugglers and street urchins.)  Great murals of the Roman fort (above) and of Robert Louis Stevenson gave some insight into the village history.  And we were so pleased to be somewhere warm and dry.  I chose the leek and potato soup.  It wasn't pureed.  Too watery for my tastes.  The best thing I had in the cafe were the warm bread rolls.  Superb. 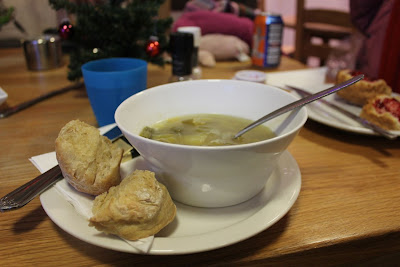 I decided to order the brie and cranberry sandwiches after my soup.  They sounded so good.  Unfortunately the brie was cold out of the fridge and didn't ooze into the cranberry in the way I had hoped.  The crisps were nice (you can't go wrong really) but the potato salad was a big soggy and the rest of the salad was too many leaves for me.  Not fantastic winter food. 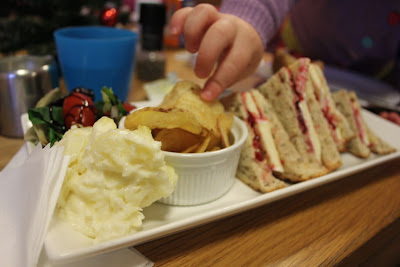 After lunch, E strummed his ukelele and we admired some of the colourful artwork hanging on the walls.  If only I had space on my walls and space in my suitcase I might have been tempted to buy some of it.  Sylvia loved the Christmas decorations.  Indeed they were better than the Cramond Inn.  And the staff were friendly. 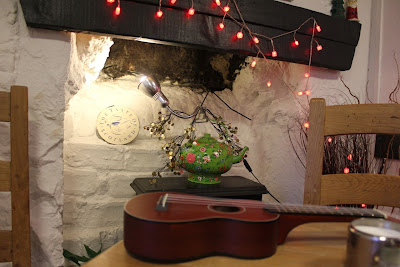 Then we walked on and decided to go to Cramond Inn anyway.  It is the white building at the top of the road in the photo below.  I foolishly didn't look at any historical information (if there was any), thinking I might find some on the web.  The best I could find was the Cramond Association's claim that the Cramond Inn is part of late 18th Century buildings, but parts of the inn are older. 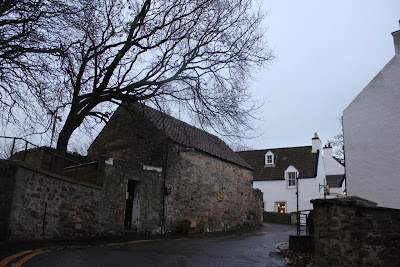 Like many other parts of the "village", the Cramond Inn held memories for E.  He had held a 21st party here.  Upon stepping inside, we were welcomed by a roaring fire, a cosy nook and the regulations stipulating that under 18 year olds can't sit in the bar.  So we were banished to the empty dining area which looked mock-Victorian.  It had none of the warmth and authenticity about it. 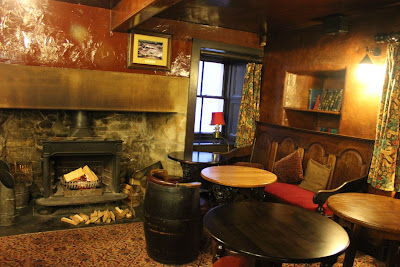 A glass of port, a hot chocolate, a small child and the gentle sounds of E strumming his ukelele brought some life to the room.  It might have been a bit grim if not for the locals.  We struck up a conversation with a couple of regulars, one of whom had lived in the same area that E had.  They were very interested in his ukelele and less interested in heading in to Edinburgh city centre. 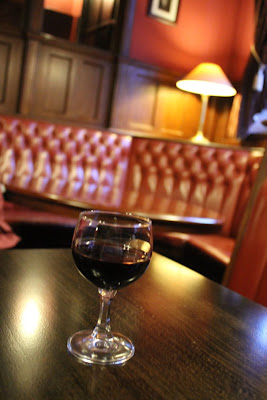 By the time, we arrived at the Roman ruins, it was dark.  They were surrounded by the historic Kirk and the Bishops Tower.  All in all, our trip to Cramond had not been quite as intended.  We were treated badly by the weather, the web and the regulations.  Yet we left with fond memories of the friendly locals and atmospheric old buildings.