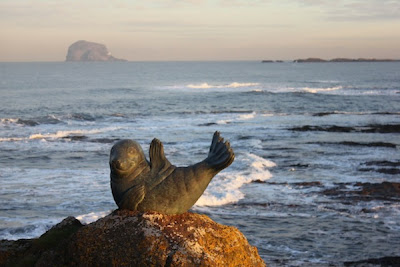 North Berwick is a seaside town near Edinburgh that has many layers of memory for E and his family.  Our day there last week flew by in a blur of splendid views, tea rooms, gift shops and charity shops. I took so many photos that I have tried to collate a few into collages that I have been doing using picmonkey. 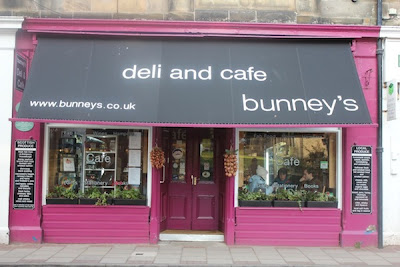 After poking about in some shops, wanting to buy everything in the Westgate Gallery and being amazing that the Cancer Research UK charity shop sells gift cards, we were ready for an early lunch.  I was drawn into Bunney's deli and cafe to look at the food and spied the cosy wee cafe out the back. 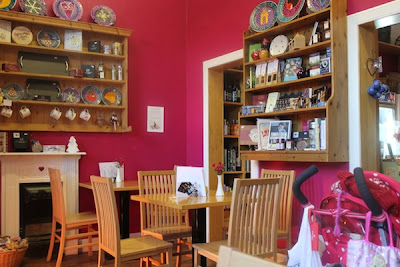 It was bitterly cold outside so E was after some hot food and a seat by the heater.  He chose the black pudding in a roll, which he slathered with HP sauce.  Not at all my thing!  Sylvia was lucky enough to have the last plain scone which she ate with jam. 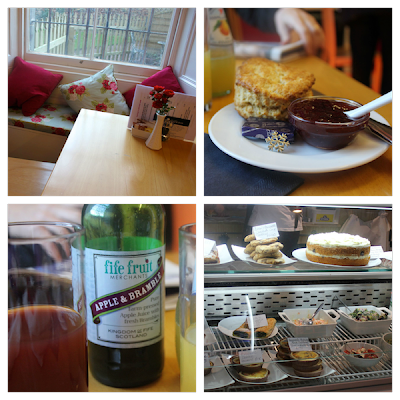 I had been interested in the quiches and salads in the display but I agreed with E that a warming lunch was what we needed.  I had the courgette and marscapone soup.  It was fantastic.  It was creamy without being too rich and the flavour was superb.  I also had some apple and bramble juice - just because I could. 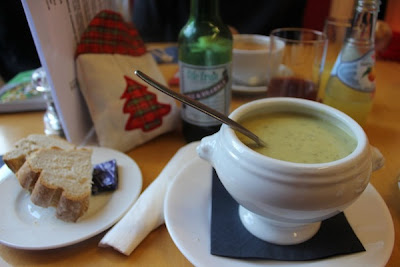 After I finished my meal, I spent more time wandering around the deli section.  I really wanted to buy the fancy salts - spruce salt, heather salt, smokey whisky salt, and wild garlic salt.  (Upon speaking to the customs offer when we arrived in Melbourne yesterday I was told I probably could have brought them in as food with a lot of salt or sugar usually is bug free and can be brought into the country.  However E did have a breakage in his suitcase so bringing the jars in would still have had a risk.) 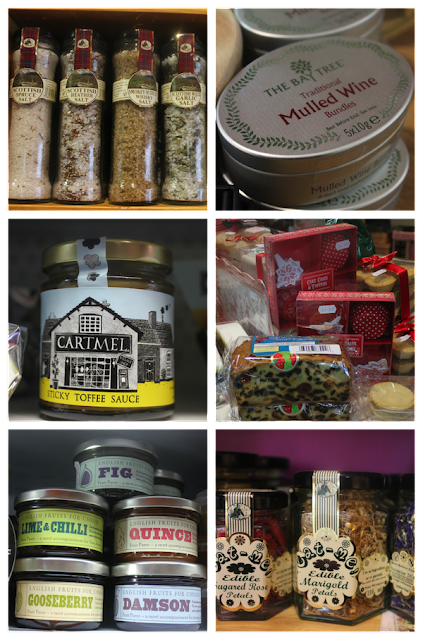 I was also sorely tempted by the jars of marigold and cornflower petals, the mulled wine bundles and the damson and gooseberry fruit purees.  We did walk away with some Stockan oatcakes, soda bread and chocolate lebkuchen.  (The bread was among the nicest that we bought in Scotland.)  Finally I pulled myself away from the delights and temptations of Bunneys. 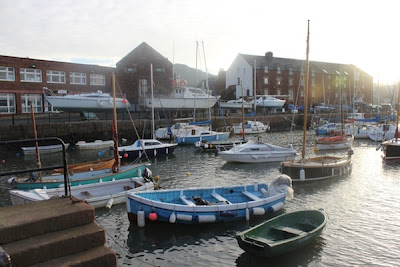 We wandered through a few more shops and then down to the harbour.  I love the clinking of all the boats in the breeze and the mass of high masts.  E remembers when it was a busy working harbour when he would visit as a boy.  It was very quiet when we visited.  I was interested to see some colourful murals that I hadn't seen before. 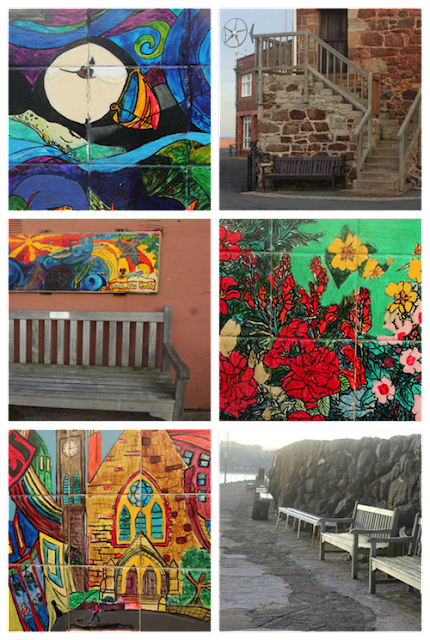 We then found ourselves at the Scottish Seabird Centre.  It is a place we have visited before to buy souvenirs but have never been in to see the exhibitions at the centre.  Inevitably we got caught up in the gift shop and tea room.  It was so inviting with all the lovely Christmas decorations.

There was also a great view of Bass Rock out the window. (See rock on horizon in top photo.)  It was one odd thing that E and I noticed about North Berwick.  Most of the tea rooms are clustered on the High Street (and some very good ones including Cake, Charlies and Tiffany's Tea Room that we visited in 2009).  It seems to be only in the Seabird Centre that you get enjoy a meal or a cuppa looking out over the sea. 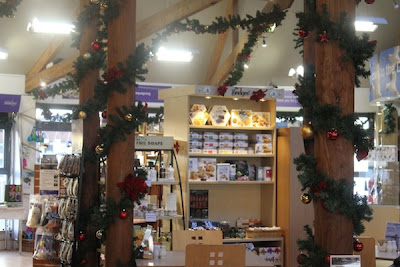 We had expected to find more places selling mulled wine in Edinburgh but for a while we had no luck.  So E was delighted that not only were they selling mulled wine but that there was also a free mince pie with it.  I didn't see the mulled wine and asked for a cranberry, raspberry and elderflower tea.  Once I saw the mulled wine I had to order it too.  It is such a wonderful way to keep out the winter chill. 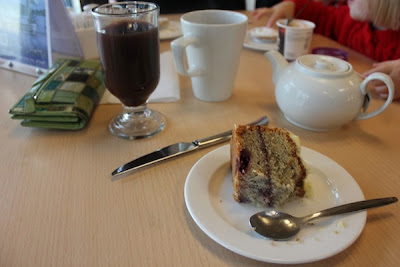 I wrapped my mince tart in a napkin and took it home in my bag for later.  The millionaire's shortbread with orange filling looked intriguing but I couldn't resist a piece of cranachan cake.  It was only this year that I heard of such a cake through Rachel and wanted it.  This cake was quite stodgy (as I imagine it should be with oats though the staff couldn't confirm that it had oats) with some pleasing spots of raspberry, very little taste of whisky (that the staff could confirm was in it) and buttercream icing.  I've always meant to try making cranachan for dessert but now I suspect that I might prefer to try a cranachan cake recipe. 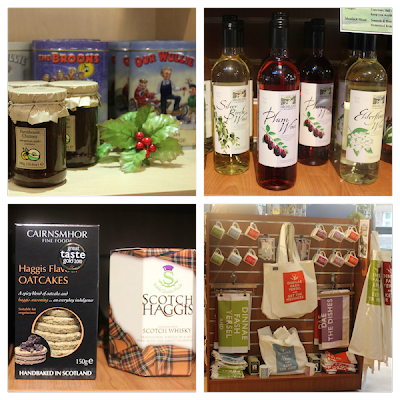 After our mulled wine we returned to the gift shop.  Everything looked so tempting (and I am sure it wasn't just our mulled wine goggles).  The range of fancy drinks was fascinating. Mead, sloe gin and elderflower wine all sounded interesting.  I bought a bottle of silver birch wine (that we enjoyed at my sister-in-laws with some leek and cheese tart and roasted pumpkin).  Haggis flavoured oatcakes seemed the sort of crazy modern gourmet that I would happily embrace if only it was vegetarian.  And we were pleased to see the Dinnae Fash range of tea towels and mugs. 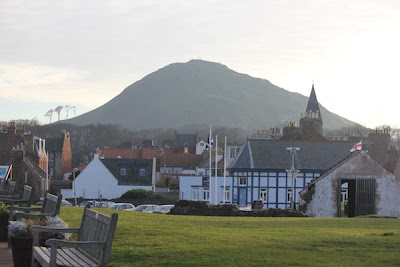 So despite our good intentions, we didn't get to go into the actual Seabird Centre, yet again.  By the time we had eaten and purchased, it was getting dark and we wanted to go to look at the rocks where E had played as a boy.  Sylvia has a book called the Treasure at North Berwick and she recognised the rocks from here book.  And apparently Robert Louis Stevenson played there on his childhood holidays.  It was so cold that when Sylvia wanted to sit on the park bench I found it was covered in ice. 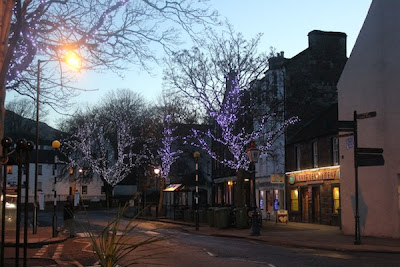 By the time we headed back to the train station it was getting dark.  We often headed home in the dark on our trip to Scotland.  It didn't seem so bad when we could admire the Christmas lights.  North Berwick was no exception.  It was festooned with festive decorations that made it a delight to wander about in the daylight or the dark.