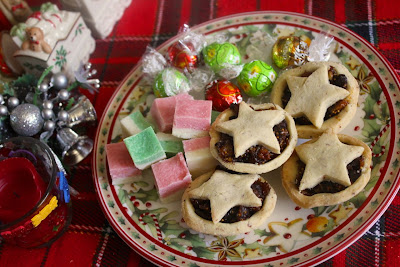 Christmas day!  Food!  Nut Roast!  Presents!  Cherries!  Mayhem!  Mince pies!  Our Christmas day started with an excited child, presents and a a quiet breakfast at our place.  I had prepared a batch of the cranberry nut rolls that I made last year.  Delicious with swiss cheese.  Most of the day was spent down at my parents' place. 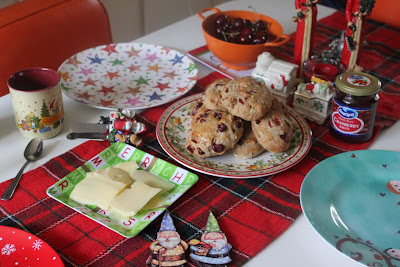 We arrived in time for exchanging presents.  This is where the mayhem begins.  Once upon a time I was able to keep track of who got what.  No longer.  My dad hands out presents at some pace.  Wrapping paper flies about, thanks abound and little kids run around with new toys.  It is lots of fun. 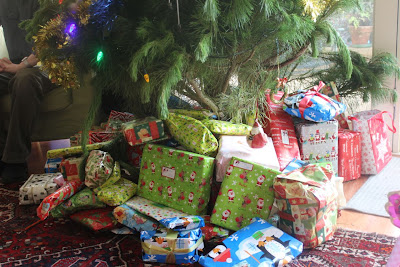 My mum had Christmas lunch under control.  Below is her modern take on roast potatoes.  My brother cut the potatoes thinly with a mandoline.  Then my sister-in-law and myself helped him to arrange the thin slices into a baking dish.  Baked with some cream, garlic and butter.  They were a fun way to eat potatoes.   Quite labour intensive to make but impressive to look at and tasted even better the next day. 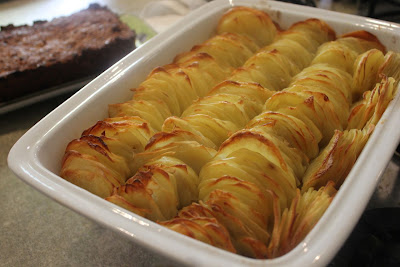 I made my usual Christmas nut roast.  (You can see it above next to the potatoes.)  Below is my Christmas lunch: nut roast, potatoes, roast pumpkin, roast carrot, peas, cauliflower puree and green beans.  Most delicious.  Though I must say that Christmas dinner was even more chaotic then usual.  My mum did some crackers, dip, fried cheese and prawns for a starter.  Even after a game of backyard cricket, I think a few kiddie appetites were lost to the main attraction. 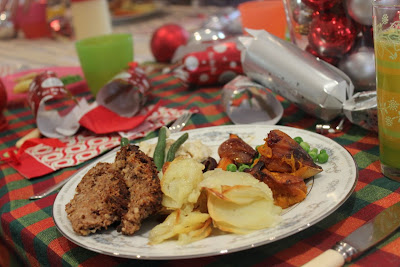 Though isn't it funny how kids can be too full for the main event and still have room for dessert.  My mum made a pudding with custard (my favourite) but the majority went for the pavlova and chocolate ripple cake. 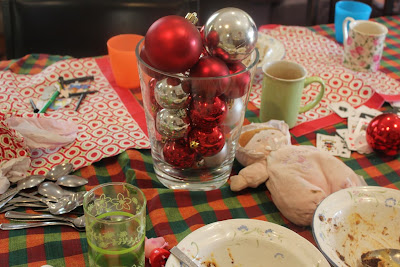 After lunch, some of my siblings headed off to the in-laws.  There were naps and baby cuddling and catching up on gossip.  Sylvia played shops.  Trivia questions were asked.  Energy levels were low.  Dinner was just leftovers.  My mum brought out the Christmas cake and mince pies. 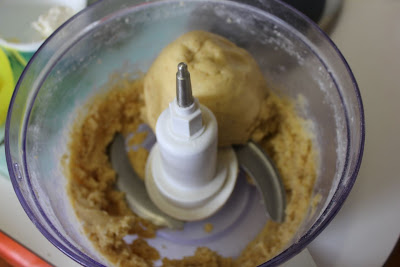 Mum has been making mince pies ever since I can remember.  She uses this pastry.  It is far more yellow and a bit more cakey than short compared to the one I made this year.  I tried Dom's Cream Cheese Pastry.  He claims it is his favourite sweet pastry.  It was far shorter than the yoghurt pastry I tried mid-year for mince pies. The yoghurt pastry was good but slightly chewy. I think I prefer this cream cheese pastry.  My mum wasn't so sure. 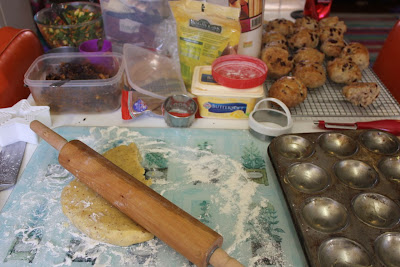 I made the mince tarts on Christmas eve.  It was chaotic.  I used my usual fruit mince and added some finely chopped dark chocolate.  An excellent addition.  It is quite subtle but there is just enough hint of chocolate to really make the fruit mince special.  For Sylvia, who is not at all into fruit mince, I added jam instead of fruit mince to a few pastry cases to make jam tarts. 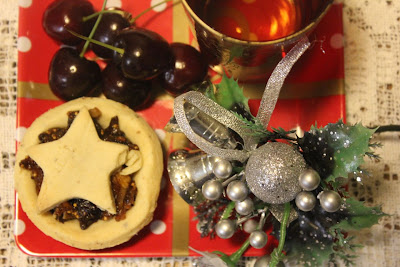 Santa enjoyed his mince tart and I have enjoyed a few.  My panforte didn't come out until Boxing Day on the dessert buffet when my dad's family visited.  As well as panforte we had caramel tart, pineapple delicious, summer pudding and ginger roulade with toffee.  Then Christmas cake, mince pies and chocolates.  And cherries.  'Tis indeed the season for feasting.

E and I also continued our Boxing Day movie tradition and saw Les Miserables.  It was indeed quite miserable but epic and beautiful to look at.  Hugh Jackman and Anne Hathaway were fantastic.  I particularly enjoyed it because not only did I see the musical on stage when it was first performed in Melbourne but I also spent a summer reading Victor Hugo's novel when I was a student with more time on my hands.  A grand tale of redemption and love.

Place flour, sugar and ground almonds into food processor.  Add butter and process briefly until mostly combined.  Then add cream cheese and egg yolk.  Process briefly until it comes together into a ball (well mine sort of did but was still very very soft).  Knead briefly using a generous amount of flour.  Shape into a disc and wrap in clingwrap.  Chill in fridge for at least 30 minutes.  Roll out on a well floured board with a well floured rolling pin until the dough is about 0.5cm.  Cut out circles to fit a patty cake tin, fill with fruit mince and top with stars.  Bake for 20 minutes at 170 C.  (I think I did slightly more but was too distracted to remember clearly.)

On the Stereo:
Dr. Demento Presents the Greatest Novelty Records of All Time, Volume VI: Christmas
Posted by Johanna GGG at 23:03