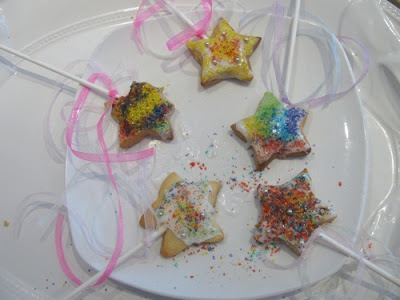 On the weekend I had great fun helping my nieces make cookie wands at Maddy's birthday.  I offered to make these wands rather than a cake because it seemed a better way for the kids to get involved.  I expected the kids to enjoy it, but I was surprised how much the adults got into the decorating when offered the chance. 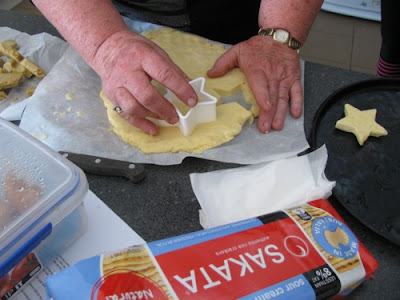 The idea for the cookie wands came from Barbara at Winos and Foodies.  I checked with my sister Susie and my niece Maddy who liked the idea.  Then my mum and I made plans.  She bought ribbon and I bought lollypop sticks and sprinkles (from Cake Deco).  On the morning of the birthday lunch, just a small family gathering, mum and I made the biscuit dough.  We made a batch of regular dough and a batch of gluten free dough. 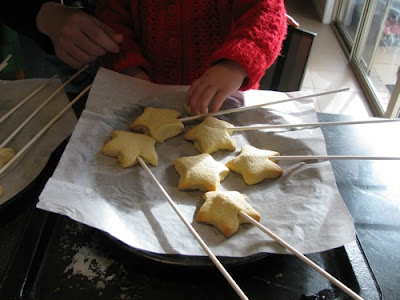 Susie and mum had made delicious food for lunch.  Mum made regular and vegetarian sausage rolls (with my usual sausage roll filling), Masterchef's Caramelised Leek, Goats Cheese and Sage Tart (with a gf pastry option) and Donna Hay's Cocoa Brownies (with gf flour).  Susie prepared dip with crudites and crackers, hotdogs in rolls, a grapefruit juice and lemonade punch with pineapple juice ice cubes, and a platter of fruit and marshmallows. 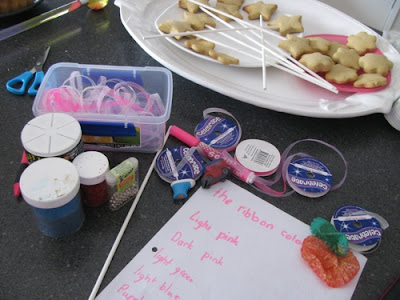 Meanwhile, Maddy and I worked on setting up the stations (with help from Grace).  We cut up ribbons for the ribbon station.  We got out the sprinkles for the decorating station.  Finally I mixed the icing.  Our plan was that each child would choose two ribbons to tie around the stick, then I would ice the star and the child would decorate the wand with their choice of coloured sprinkles.  Of course it was more chaotic than that.

Once the kids had finished their turn, we invited the adults to decorate a wand.  Wary at first - they just don't have the easy enthusiasm of the kids - they all joined in eventually.  Quin helped to decorate a few extra gf bikkies without sticks.  Everyone had fun.

The wands looked gorgeous and colourful.  Next time I would colour the icing rather than just using plain old white.  I didn't do the piping around the edges like the Kids Cakes book suggested.  As an aside I found some of the terminology alien to me - "pastry cones", "half sheet pans" and "sanding sugar".  I am not sure if that is due to my lack of decorating prowess or my living over the other side of the world from the author. 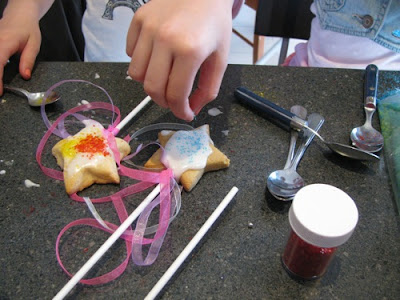 We all agreed that this was a great idea for a party.  After the palaver with the dough, my mum and I thought it would be a bit easier to bake the wands before the party.  Kids could decorate a wand each and take them home at the end of the party rather than a lolly bag.  These are the sort of biscuits (or cookies) that don't taste that interesting to me but they are fun to decorate and play with.

It occurs to me that it would be a great team building exercise.  I much prefer to be doing something with my hands than having to make small talk with strangers.  One of my favourite conference activities was decorating clap sticks.  It was relaxing to be doing something and just chatting when we felt like it.  I much prefer this sort of activity than paintballing or getting drunk in a pub.  Sadly it is not everyone's cuppa tea. 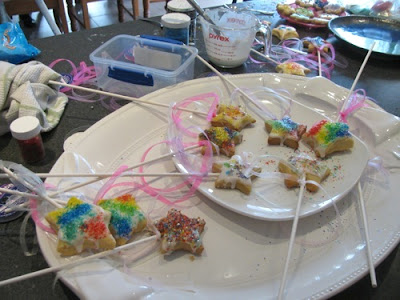 Sugar Cookies
Adapted from Kids' Cakes from the Whimsical Bakehouse: And Other Treats for Colorful Celebrations
Makes approximately 24 to 30 wands (I don't think we got so many)

Cream butter and sugar.  Add the egg and vanilla and mix until creamy.  Add the dry ingredients to the bowl and mix until the dough comes together into a ball.  My mum did this by hand but the dough was quite soft so she said she would find it easier to do this in the food processor and could have added a little extra flour and made it more manageable for rolling out. 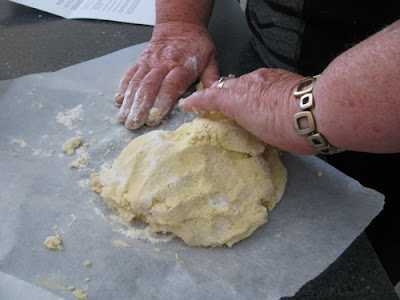 Wrap ball of dough in clingwrap.  Chill in the fridge for 30 minutes (we did 15 minutes in the freezer).  Roll the chilled dough out to between two sheets of baking powder to between 0.5 and 1cm thick (ideally it would be 0.5cm but as we needed to get lollypop sticks in, it was easier to have it a bit thicker).   Mum needed quite a bit of flour to roll out the flour because it was so soft, even after chilling.  Return rolled sheet of dough to the fridge for about 30 minutes. 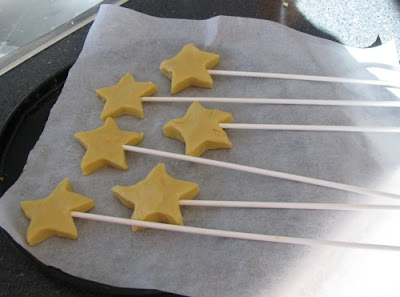 Cut the chilled rolled dough into stars using a star shaped cutter.  Transfer to a lined baking tray.  Push lollypop sticks into stars.  It should go in at least halfway through the stars.  I actually picked up each wand to check the star wouldn't fall off the wand when held upright.  Arrange wands on a tray so they are well spaced.  Alternately you can cut into any shape you wish.  Bake at 180 C (350 F) for 10-15 minutes (I will check about the time).

Cool on a rack before checking that the wands can be held upright.  Decorate with icing and sprinkles.  The book suggests when decorating that you hold the cookies when rather than the sticks to stop them collapsing.

In a food processor, mix dry ingredients.  Add butter (cold from fridge) and process until the mixture resembles fine breadcrumbs.  Mix in remaining ingredients in the food processor until a ball is formed.  You can use straight away or keep in the fridge wrapped in clingwrap until you need it. 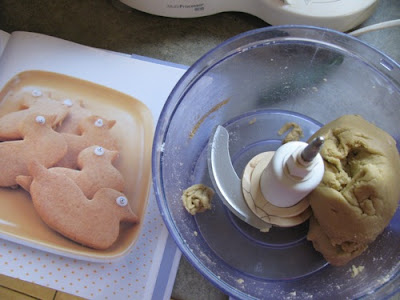 Roll out until about between 0.5 and 1cm thick, using a little gf flour.  Cut out using a star cutter (to make wands) or cookie cutter of your choice.  Place on a baking tray lined with baking paper.  Make sure there is a little space between them.  To make cookie wands, carefully push a lollypop stick into each star.