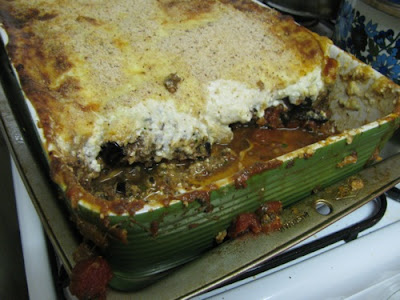 It was some weeks ago that I had a cooking session with my friend Yarrow.  He is currently living in Hong Kong without an oven.  All he wanted was to cook food that needed an oven.  An excellent plan given that it is the middle of winter.  I presented some options and he chose the Moussaka with Mushrooms, Lentils and Walnuts from the Cafe Flora Cookbook. 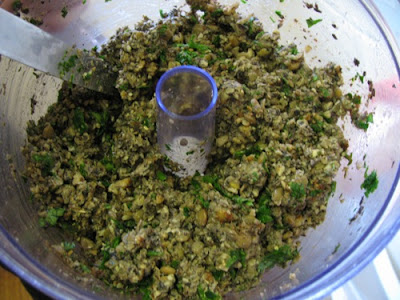 I love this book but you have to have time to make a lot of the main meals.  They often are fiddly with a few components to prepare.  This one was no exception.  The recipe took over 3 pages of text.  It required a mushroom lentil walnut mixture, tomato sauce, bechamel sauce, and roasted eggplants.  The cooking didn't go quite according to plan.  We made some changes, cut corners.  Used different cheese, didn't peel eggplants, didn't warm milk first for the bechamel sauce. The oven went off while we were roasting the eggplants.  The lump of ricotta that Yaz brought from the deli was too big but we just put it all in. 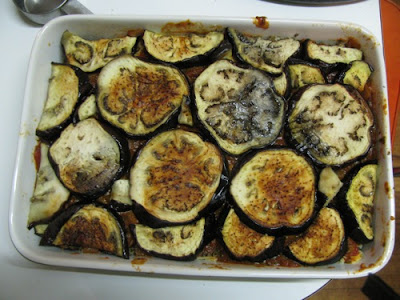 I loved the vegetarian "meat" in the recipe.  Mushrooms, lentils and walnuts are ground up to resemble the minced meat that I loved as a child.  I'd far prefer this vegetarian version today.  It is not a new idea to me.  Ricki's Meaty Veg Based Ground "Meat", Angela's Lentil Walnut Taco Meat II, Sarah's Super Vegie Lentil Taco Meat and my Vegetarian Haggis all give substance, texture and protein to vegetarian dishes.

As an aside, we also tried Ricki's Beet Jerky but it just wouldn't dry out enough to be chewy.  Maybe substituting cornflour for potato starch made a difference.  So that is a faux meat that I must try again before posting about it.  I can tell you that it was a tasty snack while we cooked! 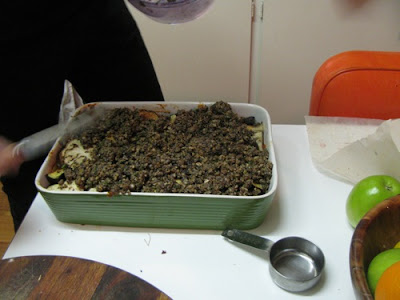 Yarrow did the bulk of the work while I worked on other dishes and minded Sylvia.  She was too interested by all the cooking to be able to sleep.  Instead, she had lots of questions for Yaz: what is your name?  what are you doing?  do you need help Yarrow?  It was warm enough to leave the door open and Sylvia thought maybe she would take dolly and baby doll outside with their dinner.  Later, she was further charmed by Yarrow when he had time to sit and read her a story. 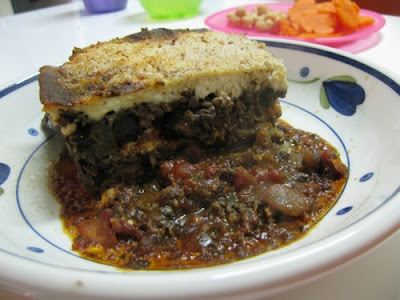 By the time we were ready to serve the moussaka, the topping wasn't as crispy as I would have liked but I loved the way that the juices were bubbling over the edges of the baking dish.  It was messy to serve when freshly cooked but once cooled, sliced up nicely.

We all agreed it was excellent - intense and substantial with the mushroom lentil walnut meat.  The ricotta made the topping extra creamy but I was surprised it wasn't as heavy as I often find lasagna due to the layers of eggplant.  E is wary of eggplant but it was soft and yielding in this dish.  Yaz declared it the best moussaka he had ever had.  I couldn't remember ever eating it before, though I suspect I might have. We followed it with Orange Lavender and Almond Syrup Cake and Mulled Wine while we watched Bagpuss.  Yaz left with packages of food and we were eating moussaka for a few nights to come. 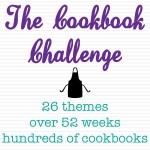 The Cookbook Challenge theme for the fortnight just passed was Hearty.  This dish is perfect so I will be sharing it with my fellow challengers.  To see what they have made, go here.
Previously on Green Gourmet Giraffe:
This time last year: Lentil quinoa balls and fun links
This time two years ago: Frugal Freezer Stock and a WIP Stew
This time three years ago: Stouty Oatmeal Beer Bread
This time four years ago: Mushroom Yoghurt Pie with Spinach Crust

To make Mushroom-Lentil-Walnut Mixture:
Roast mushrooms with olive oil in a 180 C (350 F) oven for about 20 minutes or until mushrooms shrink and smell cooked.  Cook lentils in a medium saucepan with water and bayleaf for about 20-25 minutes.  We turned off the heat and left lentils covered in a saucepan to absorb more water while we prepared other parts of the meal.  Discard bay leaf before using.  Dry-fry walnuts on a frypan until starting to brown and smell cooked.  Blend mushrooms, lentils and walnuts in a food processor until they are "the texture of ground beef".  Stir in remaining ingredients and taste.  Adjust seasonings as desired.

To Make the Roasted Eggplants:
Cut eggplants into 1 cm thick rounds.  Place in a colander and sprinkle with salt (NB Yaz had so many slices of eggplant that he had trouble moving them about, so use a good sized colander if you have one.)  Rest for about 30 minutes.  Rinse thoroughly and pat dry with paper towels.  Place eggplant in two greased roasting dishes or baking trays.  Brush with olive oil and roast for about 30 minutes or until "tender".  (NB Tender is how the book describes it, but I would say cooked through and even soft.  No one liked undercooked eggplant!)

To make the Cinnamon Tomato Sauce:
Heat oil in a medium saucepan and gently fry onion and salt for about 10 minutes until soft and translucent.  Sitr in garlic, cinnamon and cloves for about 1 minutes.  Add red wine to deglaze and cook a couple of minutes until most of the wine is absorbed.  Add tomatoes, water, parsley and oregano.  Simmer, covered, for about 30 minutes.

To make Ricotta Bechamel Sauce:
Melt butter in a medium saucepan and then stir in flour.  Cook for a few minutes over a low heat.  Gradually add milk and bring to the boil, stirring occasionally, until the mixture thickens.  Add nutmeg and ricotta and stir to combine (I found our ricotta slightly lumpy but it didn't matter if it wasn't completely smooth).  Add salt and pepper to taste.

To assemble:
Preheat the oven to 180 C (350 F).  Grease a 13 x 9 inch baking dish.  Layer half the tomato sauce, half the eggplants, half the walnut mixture, and half the cheese.  Repeat layers.  Sprinkle with breadcrumbs.  Bake for 45 - 60 minutes.  Ideally let sit 15 minutes before eating, depending on how hungry you are.

On the stereo:
The Greatest Hits: Teardrop Explodes
Posted by Johanna GGG at 22:00