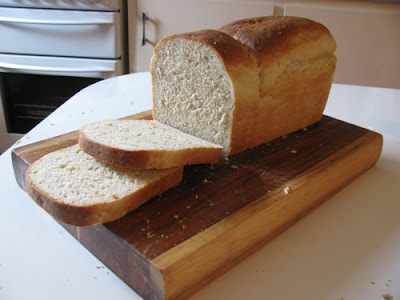 A recipe for a good simple loaf of bread is hard to find.  I am sure there are many out there.  That is the problem.  Which one to choose?  It is a veritable tyranny of choice out there!  Simple should be easy.  Yet I fear dull, dry and dreary when it comes to simple breads.  Recipes need to inspire.  I need a source I can trust.  Enter Brydie's step by step guide to making olive oil bread.  Having made four batches of this bread over the last month, I can highly recommend it. 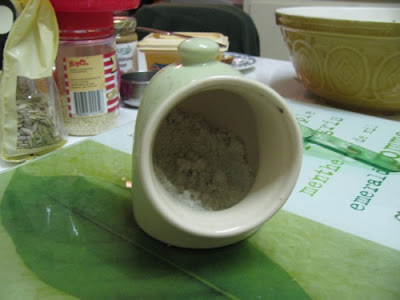 I have made it in the evening when we haven't managed to get out and buy a loaf of bread.  What I love about this bread is it uses ingredients I have on hand and it is works in with my lifestyle.  I have tried adding wholemeal flour.  I have left it rising while I go to the supermarket and get chatting to a friends.  I have paused to photograph the salt hog because my new celtic sea salt reminded me of the sand on the beach and then I have forgotten how much salt I put in.  I have made it with canola oil rather than olive oil.  I have tried making it using the sponge method that Mollie Katzen favours.  I have made it between Sylvia's bath and Downton Abbey on the telly. 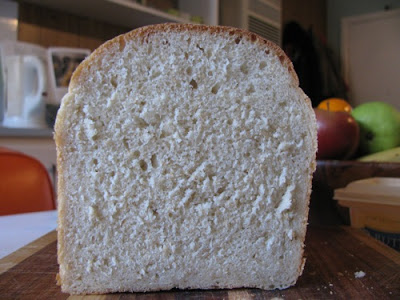 I make it in my bread tin.  It comes out with a gorgeous golden brown crust.  It looks just like a regular loaf of bread we might buy from our local bakers.  It slices easily.  It makes excellent toast.  It keeps well for a few days.  It is a joy to wake up to a fresh loaf.  The recipe is adapted from The Bourke Street Bakery cookbook.  I was interested to find another adaption of the same recipe for Parmesan Breadsticks where they say that the recipe works fine with regular flour. 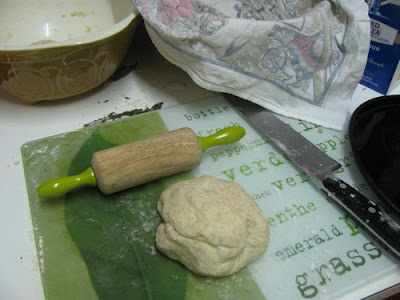 Brydie recommends using this dough in a variety of ways.  I love her fish bread.  I want to make the sunflower bread that first drew me to her blog.  My first variation was taking her advice that the dough makes excellent calzones. I needed a loaf of bread and I needed dinner.  So I made two batches of dough.  I used a Jamie Oliver vegetarian calzone recipe to inspire me for the filling. 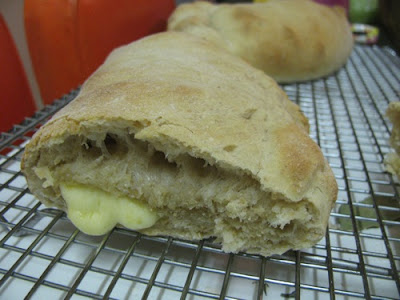 I was a bit unsure how to prepare the calzones.  Pinching it together to seal it was quite different from making pasties.  Bread dough is far more robust and flexible than pastry.  The calzones were huge.  E and I enjoyed ours.  I ate another one for lunch over two days and  still have one in the freezer.  Sylvia had a plainer one with just mozzarella and didn't eat heaps but maybe a small amount was enough for her.  Definitely something with which I would like to experiment further.

It has been a while since I posted any bread recipes but with the winter chill settling in, 'tis the season for bread baking.  I am sending this bread to Susan's YeastSpotting weekly event.

1. Put yeast, sugar (if using) warm water and the flour* in a large mixing bowl.  Leave for 10 minutes.  It will be a dry shaggy mess if you add all the flour at this point but don't worry.

* I have tried a few different ways with flour.  It works with one third or a half wholemeal flour (and a few teaspoons of gluten flour if it is not bread flour).  I have made one batch with just a handful of flour for the first 10 minutes and added the rest of the flour after that time. 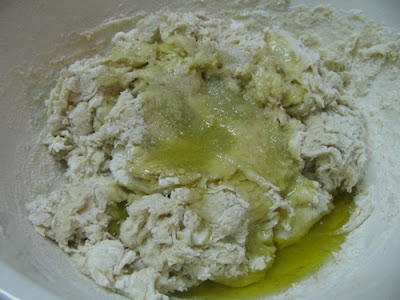 2. At the end of the 10 minutes add olive oil and salt, and the rest of the flour if you didn't add it all at the start.  Stir to combine as much as possible.  It is a not easy to add the oil and salt (and much easier if you hold back some flour to add at this point) but once you start kneading, it is fine if you haven't completely mixed it it.

Tip dough onto lightly floured board and knead until soft with an ear lobe consistency.  This dough doesn't need much flour, just a light dusting every now and again while you knead.  I kneaded it for 10 minutes the first few times but then I thought it was coming together within a few minutes and found that 5 minutes was fine. 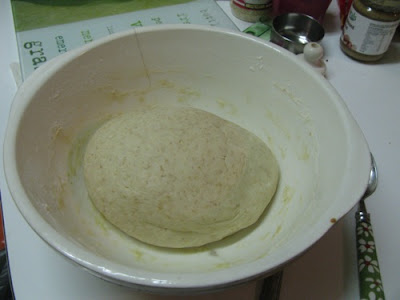 3. Scrape any loose bits of dough out of the mixing bowl with your hands and place the dough in the bowl.  Cover with a damp teatowel.  Let rise for about 30 minutes or until doubled in size.  I have left this to rise for over an hour and it seems to be ok. 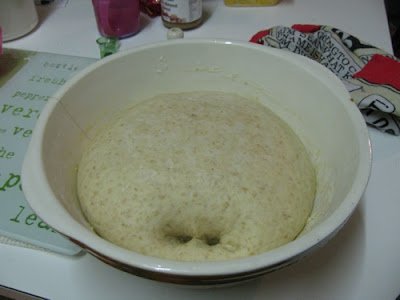 4. At this point Brydie folds it but I am not so good at folding dough and have often being hurrying so I might make a half hearted attempt to fold it a couple of time.  Mostly I just knead it for about a minute.  Return it to the bowl covered with the damp teatowel and rise another 30 minutes or until doubled in size.

5. Knead about a minute and either place on a greased tray or place in a greased bread tin.  I do the latter (my bread tin in 25cm x 9cm and about 10cm high).  I cut it in half, roughly knead each half into a neat ball and then press the two halves of the dough into the tray so they are about even in the tin.  Cover with the damp teatowel and leave to rise about two thirds.  Mine gets to about an inch from the top of the tin but rises to the top once baked.
6. While the dough is rising, preheat the oven to 240 C.  Brydie suggests steam in the oven so I have taken to filling a loaf tin (not a shallow tin) with water and placing it in the bottom of the oven, preferably when the oven is cold.  Bake bread for about 25 minutes or until dough is a deep golden brown and hollow when knocked.  The crust might seem quite crusty when it is first out of the oven but once it cools it will just be lovely and soft. 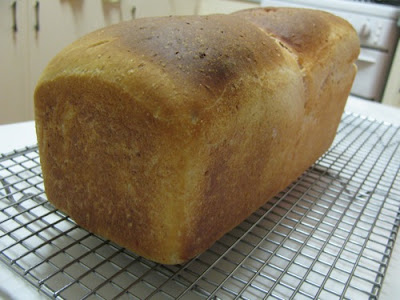 7. Tip loaf out of tin (or off the tray) and cool on a wire rack.  Leave for at least an hour and more if possible before cutting the first slice.  Lasts well for a few days but by then it is usually finished.
Mushroom and Spinach Calzone
adapted from Jamie Oliver
makes 4 large calzones

1 x olive oil dough recipe (prepared to stage 4 above)
flour, for dusting
olive oil
1 onion
500g mixed mushrooms (I used button mushrooms), sliced
4 cloves of garlic, peeled and finely sliced
1 tsp fresh thyme leaves
pinch salt
freshly ground black pepper
300ml passata (pureed tomatoes)
70g pitted black olives, chopped
300g spinach leaves, washed and spun dry
185g mozzarella, diced
Cook onion in a little oil for about 5-10 minutes until lightly browned.  In a separate large frypan, cook the mushrooms in olive oil on high heat until starting to brown and smelling marvellous.  Add cooked onions, garlic, thyme leaves and salt and pepper.  Cook a few minutes then pour in passata and sprinkle with olives.  Gently simmer until a lot of the tomato sauce is absorbed.  I think I did this for about 15 minutes or maybe more.  Stir from time to time while it cooks.  Add spinach leaves until wilted (I did this in two batches. 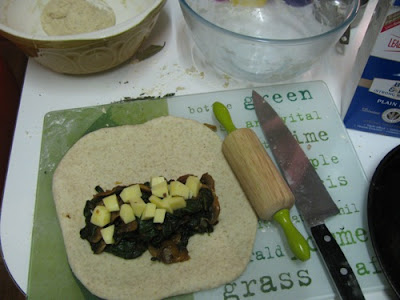 To assemble, cut the dough into four pieces and lightly knead each piece.  Roll each piece out on a lightly floured board (I think about 20cm diameter).  I used my hands and a rolling pin.  Spoon about a quarter of the mixture onto one side of each round of dough.  Fold dough over filling and pinch at edges to seal.  Place on greased trays. 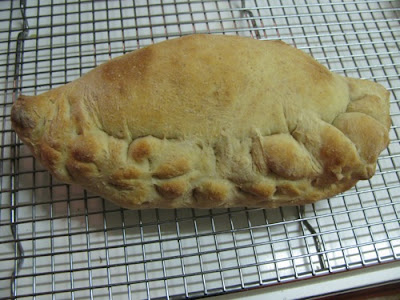 Bake at 240 C for 15 minutes or until dough is nicely browned and sounds hollow when tapped on.
On the Stereo:
Retrospectacle: the Supertramp Anthology
Posted by Johanna GGG at 22:12