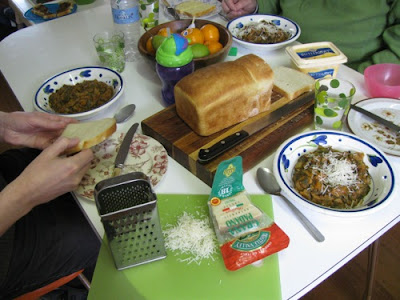 "Do you want a banana?" I asked Sylvia in the supermarket.  She said yes.  At home I cut the top the wrong way.  There were tears and pouts.  It wasn't eaten.  It got blacker and blacker until I had to do something.  Bananas are so expensive that it feels like a crime to waste them.  I made some flapjacks.  That was dessert to serve last Sunday when my friend Will came for lunch.  I also had a skanky piece of pumpkin that went into soup and a hard chunk of sourdough bread that went into Ribollita. 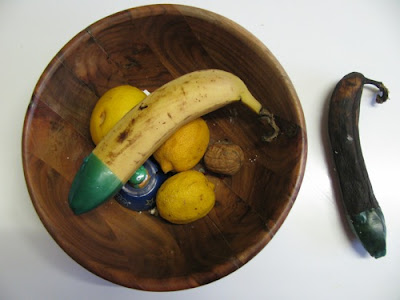 I try not to waste food in our house but it isn't always easy.  Some days the rejected dinner hasn't been touched much.  It can be recycled in a stew or a pasta bake.  Not always.  When food has been chewed, spat out, crushed and then thrown on the floor, it is only fit for the bin.  Or I find that Sylvia has given food to Little Dolly which then has sat about so long that it is no longer fit to eat.  On those days I wish for a dog or a chookhouse in the backyard to swallow up our food waste.  Last weekend I was pleased to be able to use up some ageing food in my cooking! 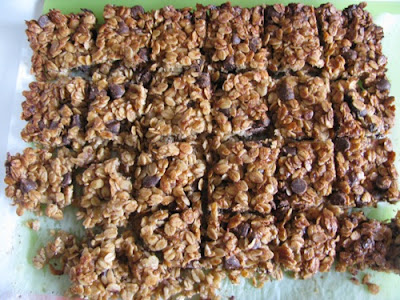 The flapjacks were based on Brydie's Banana Oat Slice with additional inspiration from Shaheen.  I used golden syrup and added some choc chips. I slid the baking tin into the oven and grabbed the car keys.  I asked E to take them out when the timer rang and leave them in the tin.  When I returned from the supermarket, the house smelt wonderful.

I had gone with Brydie's recipe that had more butter because I had thought it might hold them together but it was still a bit crumbly once it cooled.  Never mind a bit of collapsing in the fingers.  It was delicious.  Crispy, buttery, subtly sweet, undertones of banana, and studded with chocolate.
. 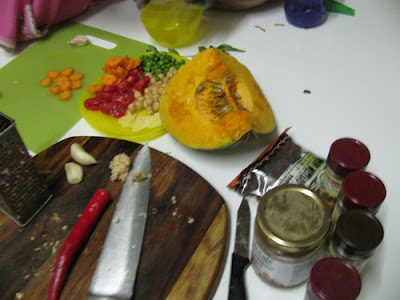 The pumpkin soup was a quick Saturday dinner while I spent more effort on a Ribollita soup (or stew) for Sunday lunch.  I had initially thought  I might make a plain soup of onion, pumpkin and stock.  Then I remembered that Lisa and Jacqueline's No Croutons Required  event had chillies as the theme.  At the supermarket I bought a red chilli, threw in some curry leaves I had in the fridge and a few favourite spices. 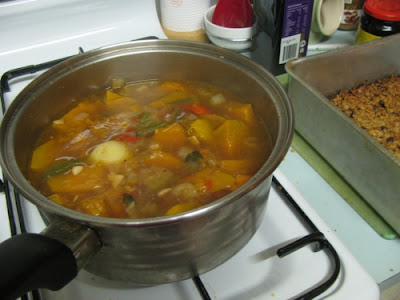 It was so watery that I threw some red lentils in at the last moment and simmered the soup for another 10-15 minutes.  The first night we served the soup with yoghurt.  I had the last bit a few days later for lunch with no yoghurt.  Both times I really enjoyed it.  Both pumpkin and lentil make for velvety texture.  Although it is not quite as hot as Lisa would like but I found it quite spicy and I know she would enjoy the mix of flavours. 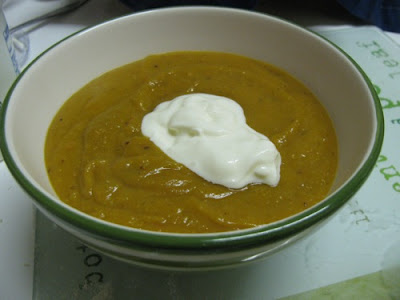 I was a bit too rushed to stop and photograph the soup nicely.  I had Sylvia to get to bed, bread to bake and Ribollita to make.  When I was searching for ideas to use up half a loaf of good sourdough bread that had gone hard, I had found two recipes for Ribollita in my bookmarks.  Jamie Oliver and Heidi Swanson are well respected in the world of food.  I felt in good hands. 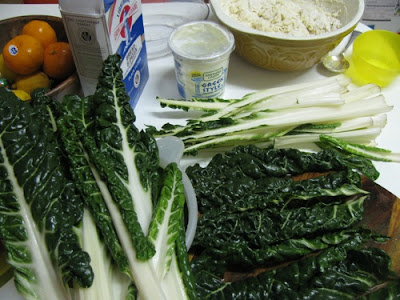 Both of them used black kale but I was particularly inspired by Jamie's comment that it is a peasant dish.  In Melbourne, kale is a gourmet vegetable.  It was unheard of in my youth.  Far more common is silverbeet, which is known as chard in other parts of the world.  I decided to go with the spirit of the recipe and use silverbeet. 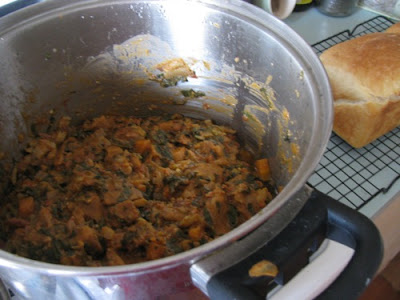 Heidi calls it a stew.  Jamie calls it a "silky thick soup".  Mine looked far more mushy than either Heidi or Jamie's photos but it was so silky that I knew it was right. I loved the way the beans broke down and thickened it.  The chunks of stale bread were softened but kept their shape and soaked up the flavour of the other ingredients.  It is a perfect winter meal but I am sure Ricki in Midsomer Canada would be pleased to accept it for her Wellness Weekends event.

When Will came around I said I had made soup.  He laughed when I served this thick mush.  "You call this soup?"  Well yes I do.  I love thick soup and am quite happy if my spoon will stand up in it.  I served it with parmesan and a slice of olive oil bread.  We had seconds.  E was lukewarm but he still ate it up.  I was happy to eat it again that night and the next day for lunch.  It was excellent. 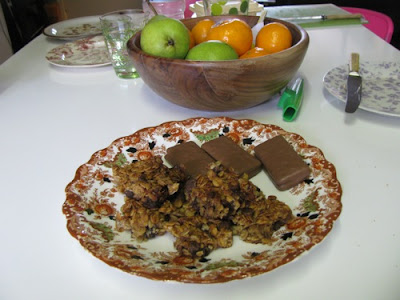 After soup (or stew), we had a plate of caramel tim tams and flapjack.  I regret to say that the flapjack played second fiddle to the tim tams.  The former are decadent treats that I only bought because Sylvia insisted (well that is my story).  The flapjack is far more everyday and was enjoyed once the prima donna tim tams had disappeared.

It was good to catch up over a leisurely lunch.  Will and E love chewing the fat about obscure music and I am always interested to hear his opinion on politics.  Sylvia ate baked beans for lunch but had to have a taste of a tim tam.  Later she showed that she had been taking notice of what I had been making and offered bowl of soup, pumpkin, biscuit and cake.  She then found a jigsaw puzzle piece that has been missing for months.  Now where did that half eaten apple go to?

Heat oil in a stockpot and fry onion, celery, carrots and garlic for about 10 minutes.  I knew they were ready because they began to smell cooked.  Tip in the tomatoes, stir well and simmer for a few minutes.  Add remaining ingredients and simmer for about 30 minutes until silky and mushy.  Stir occasionally and add a bit of water when it looks too dry.  I think I added about 1-2 cups of water in all.  Best served after sitting overnight.  Serve hot.

Heat oil in a large saucepan and gently fry onion for 5-10 minutes until browned.  Add garlic, chilli and ginger and stir for about 1 minute. Add spices and stir constantly for about another minute.  Add stock, potato, pumpkin, red lentils and maple syrup.  If you have a child refusing to eat dinner this is the time to put in leftovers such a chickpeas and carrots.  Simmer, stirring occasionally, for about 20-30 minutes until pumpkin is soft and lentils are cooked.  Blend until smooth.  Serve hot.  If desired add some yoghurt or coconut milk.

Mix all the ingredients up in the order that they are listed. Press mixture into a greased and lined pan (I used a square 23cmx 23cm) and bake at 180C for approximately 45 minutes.  Cool in the tin and then cut into squares.

On the Stereo:
Spiritual - Magma
Posted by Johanna GGG at 22:14