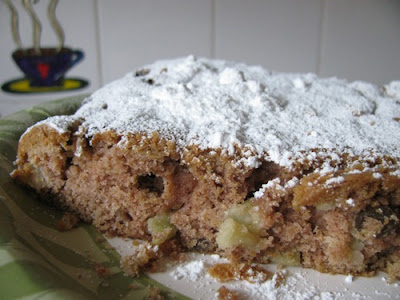 There are times when I feel I am turning into my mother.  Take apples for example.  I have always loved them fresh but have been a bit wary of cooking them.  Growing up, my mother was constantly baking with them.  Dutch apple cake.  Apple slice.  Apple sponge.  Baked apples.  Apple crumble.  I wanted stone fruit.  I didn't understand the seasons (or budgets).  As an adult I have learned the joy of apples in autumn. 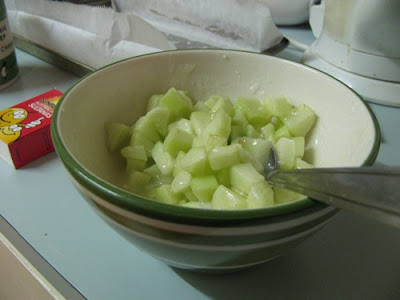 Back in April, I had an urge to bake apple cakes.  I started with a dense Apple Fruit Cake, moved onto a lighter Apple Spice Cake (recipe below) and then found that Lumberjack Cake is very similar to a favourite Apple and Date Cake.  All very good.  All had such different textures.

I made the Apple Spice Cake after coming home from a busy day that had been hijacked by a computer virus.  There was no time to drop into the supermarket.  I was visiting a friend for lunch the next day and wanted to take something for lunch.  Everything I needed was in my kitchen.  The only ingredient I left out was walnuts, which Sylvia and I had used up in a batch of fruit balls.  I made it in a small slice tin but next time might make it in my new 20cm square cake tin. 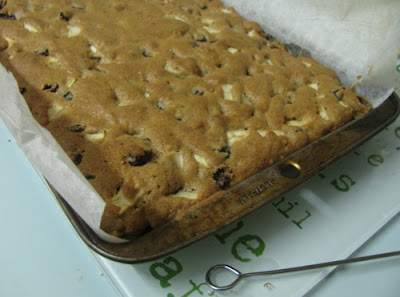 It didn't look as impressive as the Apple Fruit Cake but I loved the simplicity.  It was spicy, soft and filled with apple.  Sylvia was quite keen on it and thought the best was to help herself was to dig her fingers into the cake.  Not the best way to present a cake.  A thick dusting of icing sugar hides a multitude of sins but the cake still looked a little bumpy when we took it to Ballarat where Nicki was visiting her family. 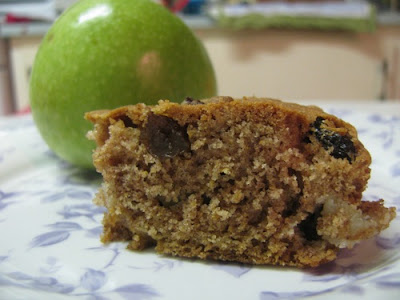 This lunch was just before Easter.  I had avoided taking chocolate because I thought that the kids would probably have enough of the stuff.  Nicki's son asked if there was any chocolate in the cake or the fruit balls.  When I said no, he lost interest.  Sylvia and Nicki's older daughter enjoyed the cake. 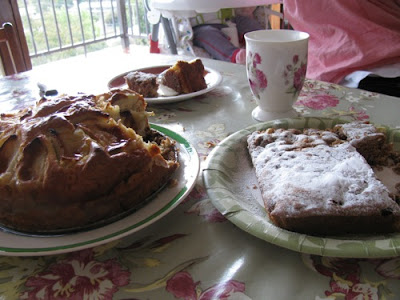 However when we arrived I found that Nicki had also made an apple cake.  Hers was a butter cake with precooked apples in the middle and on top.  By the time they were baked again they melted in the mouth.  I must get this recipe as it was simply amazing.  We had a lovely time there.  Sylvia was a little shy of the older kids.  As often happens, by the time we were ready to go, she didn't want to leave her new friends.  And I was pleased to bring home some slices of both apple cakes because there was plenty to go round. 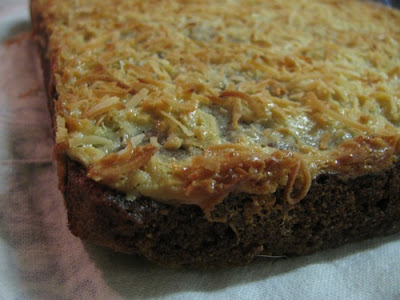 Lastly I must quickly mention the Lumberjack Cake I made.  It was made from this recipe, which is the same as my Apple and Date Cake but has coconut in the topping.  However I noticed that Lorraine used condensed milk in her topping and I happened to have some in the fridge so I just combined some condensed milk and shredded coconut for the topping.  It was fantastic.

Previously on Green Gourmet Giraffe:
This time last year: Turkish Fig Pudding
This time two years ago: Bizarre gnocchi and strange crumble
This time three years ago: Tabouli from the Tree
This time four years ago: Lasagne and the Boy Wizard

In a small bowl cover the raisins or sultanas with boiling water.  Peel, core and dice apples and sprinkle with sugar in another bowl - the apple will release some of its juices after standing for 5-10 minutes. Set aside while preparing other ingredients.

Mix butter and egg in a large mixing bowl.  Add apples and then dry ingredients.  Gently mix in drained raisins (or sultanas) and walnuts (if using).  Pour into a greased and lined tin (I used a small slice tin but next time would use a 20cm round cake tin or a 20cm square cake tin).

On the stereo:
Listen, Listen: an Introduction to: Sandy Denny
Posted by Johanna GGG at 22:48