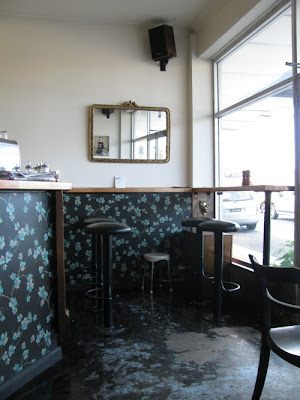 It was with great excitement that I heard that there was a hip new vegetarian cafe - Little Deer Tracks - in our neighbourhood.  Oh joyful day!  As soon as possible I headed down with Sylvia and my friend Heather.  The place was busy.  Locals were dropping in for a takeaway coffee and there were kids everywhere.  Yet we were able to find a seat near the window.  This is important for trainspotters because the cafe is near the train tracks. 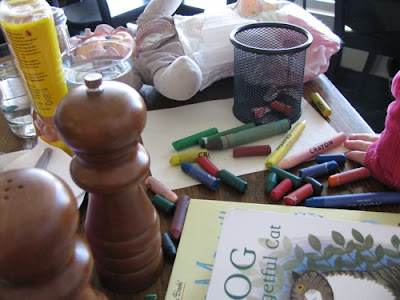 I found a tin of crayons for Sylvia, who proceeded to spread out books and dolly over the table.  She wanted chippies.  I ordered her toast with honey and hash browns.  I didn't taste the toast but the home made hash browns were amazing.  They are crisp, golden and look like large round chips.  I suspect Sylvia would have enjoyed them more if she hadn't been distracted by her toast.  My advice is that if the waiter recommends the hash browns, just say yes.

Heather chose the eggs florentine.  She enjoyed it but commented that it had a lot of spinach in it.  When I was discussing this with Will the following day, he mentioned that he had seen quite a few eggs florentine dishes lately with ham in them.  I had almost asked if the baked beans had meat in them before I remembered that the whole menu was vegetarian. 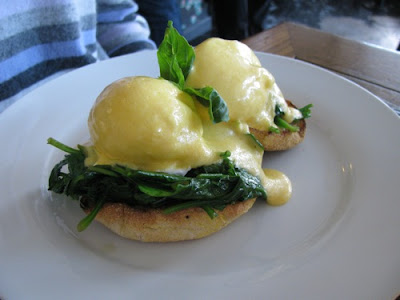 I have seen some comments about the cafe not beating its chest about being vegetarian.  I understand that some people have very narrow views of vegetarianism but for those of us who chose avoid flesh, it is great to have a safe place where meat doesn't sneak into those meals we usually can rely upon.  It is a sign that attitudes towards vegetarianism are changing when a new vego cafe heralds the gentrification of a suburb rather than hippificiation.

Which brings me to my order of the bean pie, undercooked green beans (this description made us laugh), mashed potato and tomato relish.  Fortunately we arrived late enough (11am) to have the choice of either breakfast or lunch menu.  I chose this because a good vegetarian pie doesn't often come my way.  I am very glad to have encountered this one. 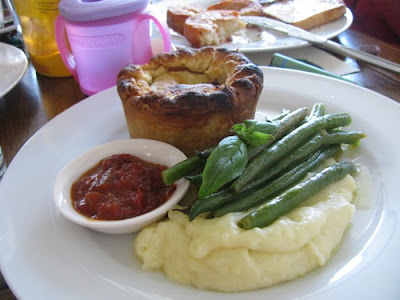 It was one of the best pies I have had for ages, possibly ever.  The pastry looked sturdy but was light and buttery.  The innards was a hearty bean with some light spices (I think I detected cumin) in a dark gravy.  The green beans were just cooked with a slightly lemon tang.  The mash was rich and creamy.  Of all the components of the meal, the relish didn't quite strike the right note.  It was a bit cold - maybe as a result of coming straight from the fridge rather than being room temperature.  However this is only a mere quibble with what was an excellent meal.  (I noticed that Michael had the same meal but with broccoli so this must change according to season.)  It was exactly what I want on a cold winter day.

After we had finished eating, I was stuffed to the gills.  I would have loved a chance to have dessert but that will have to wait for another time.  Yet I can't resist a cake display.  Sylvia was getting restless so we walked over to gaze longingly at the rich chocolate cake, lamingtons, cherry pie and carrot cake.  She had a play with a display of pigs at the top of the counter.  The staff behind the counter were friendly and happy for her to pick up the little figurines.  We paid up and walked home, stopping to enjoy the daisy bushes on the way home. 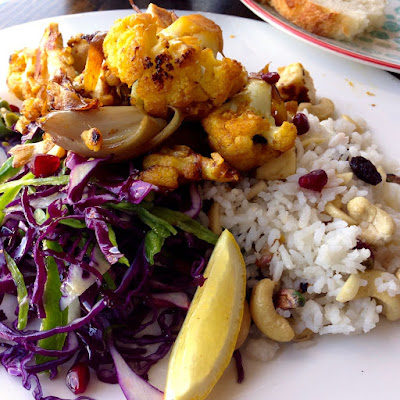 Update August 2016: Have been to Little Deer Tracks a few times since this review.  Had a fantastic lunch there this week of spiced cauliflower, roasted shallots and grilled haloumi; raw shredded cabbage and green beans; rice with cashews and sultanas; all sprinkled with pomegranate seeds!  Such a lovely way to eat lots of fresh vegies!  Photo above.