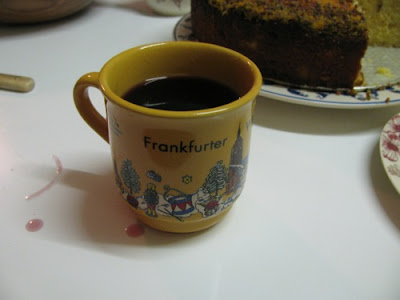 Once upon a time in a city far far away I had a wicked manager who was a bully.  She was nasty, moody and made all her staff very miserable.  Fortunately, within a few months I was rescued by a fairy godmother manager who appointed me to a position in her section.  The wicked manager stamped her foot furiously like Rumpelstiltskin, though sadly she did not disappear through the floor.  My fairy godmother manager was very good to me and among her gifts was a recipe for mulled wine from her Viking heritage. 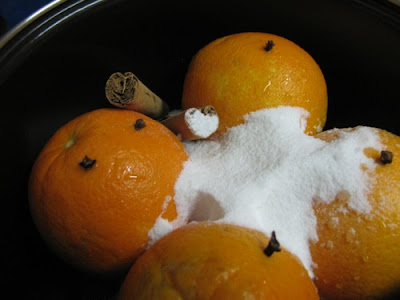 Actually Marianne was Swedish.  The city was Edinburgh: a place that appreciates mulled wine.  It seems like warmed spicy alcoholic beverages are much appreciated in its pubs and of course at the German Christmas Markets.  Great for the festive season if you live in the northern hemisphere.  It is also the perfect drink to keep out the winter cold.

The beauty of Marianne's recipe is that you don't have to worry about boiling off the alcohol.  You bring sugar, orange, spices and water to the boil, turn off the heat, add the booze and leave overnight.  I have made it this way many times and highly recommend it. 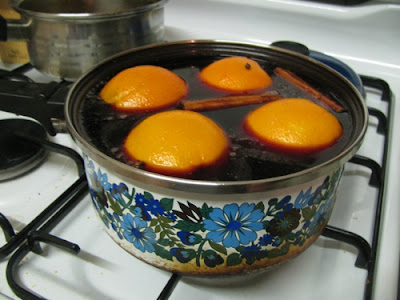 When I made it recently, I made it a more traditional way by cooking it on low for 10-15 minutes.  It was the night that Yaz was visiting so I couldn't leave it overnight.  I was pleased to find it worked well that way too.  It was a fine accompaniment to the Orange, Lavender and Almond Cake that we made. 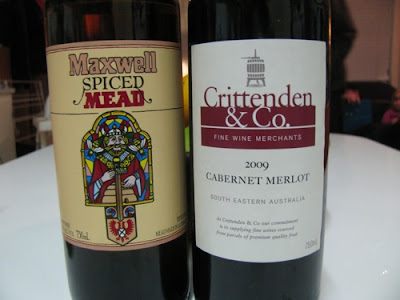 It doesn't need fancy alcohol.  This is not the time to buy one of those cheap wines with amusing names (such as "Scrapping the bottom of the barrell") that have always made you giggle and feel a tad suspicious in the bottle shop.  E's cheap wine of choice is a $5 bottle of what is known in our house as Chateau Crittenden.

As well as a cheap bottle of plonk, I had a bottle of spiced mead on hand.  In the past I have used port which I used to have around.  These days I don't drink as much and found the mead worked as well as the port to bring an intensity to the spicy warmth of the drink.  Anything will do - brandy, cointrea, muscat - whatever you have in the liquor cabinet. 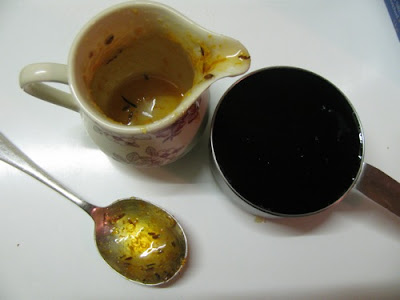 We are not big drinkers.  In the past we have often not got through a whole batch of this mulled wine.  It will keep in the fridge for a few days.  You can even store it in the empty wine bottle if you can find where your funnel is.  (Where mine went is still a mystery!)  We were gradually making our way through it.  Then I had a brilliant idea.  Not only was there leftover mulled wine but also leftover orange syrup from the cake. 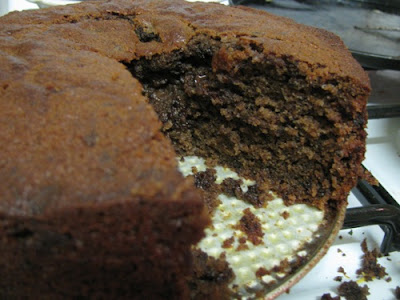 Many moons ago, I promised myself I would make Cindy's Red Wine Chocolate Cake.  A bit of orange and spice are always good additions to a chocolate cake.  So in went the mulled wine and the orange syrup one night between baking bread and watching Downton Abbey.  It didn't quite cook in the middle and it was a bit fluffy for my liking when it came out of the oven.  After a few days it was deliciiously firm and chocolatey.  I was quite sad to see the end of it. I had a notion to take a photo of the cake with Sylvia's babushka dolls to signfiy the idea of a recipe within a recipe.  Sylvia had a notion to play with them so the above is the best I could do before she grabbed them all and I had to get ready for work.  That sort of signifies how I feel today.  I have plans for posts I would like to write, for ways of organising my house, for recipes to make and yet my energy and time is quite limited.  If only life was as easy as curling up with a cup of mulled wine and a piece of cake.

Mulled wine
From Marianne
150g sugar
350ml water
3-4 oranges
5-6 cloves
2 cinnamon sticks
750ml red wine (doesn't have to be good quality)
60-80ml port or other fortified wine (mead worked well)
Stick cloves into oranges.  Place sugar, water, oranges and cinnamon sticks in large saucepan and bring to the boil.  Add wine and port.  Either leave for 12-24 hours or Heat on lowest setting on stove for 10-15 minutes - there will be a bit of steam but no boiling.  Serve warm.  We never drink it all in a night so it sits in the fridge for a few days and gets reheated as desired.
Spicy chocolate cake
Adapted from Where's the Beef?

Preheat the oven to 170 deg C. Grease and line a 22cm spring form tin (springform isn't necessary but that is what I have).  Cream the butter and sugar (I did this by hand). Mix in the eggs and wine. Mull over the colour and whether it takes on the red hue of the wine.  Gently stir in the flour, cocoa, baking powder and cinnamon.  Stir in the chocolate.  Spoon the batter into the prepared cake tin.  Bake for about an hour or until cooked.  I am not sure how you check this. I found mine was best after sitting in an airtight container for a day or two.

On the Stereo:
Jazz for Dining: Various Artists
Posted by Johanna GGG at 17:37