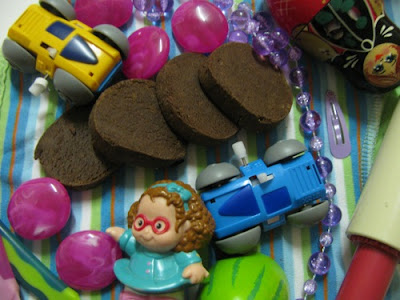 I almost got this post up on Wednesday.  I didn't have any energy left last night.  Today I am determined not to let life get in the way of blogging!  This week has been full of getting a work project up and running, Sylvia crying in the night, planning for a holiday in a little over a week, cursing my computer for falling on my card reader (that downloads photos onto my computer) and schlepping a table and chairs through Ikea carpark while Sylvia sat in the road and cried.

The trouble with delaying posting a recipe is that every time I sit down to it I have different thoughts to to share.  Today I want to tell you that a stroller has the power to stop escalators.  Yesterday I wanted to tell you that Sylvia loves her new table and chairs so much that she has told me she will no longer be eating at the table with us.  But earlier in the week I started writing about sacrifice and kids.  This is my best thought out train of thought so I will follow it. 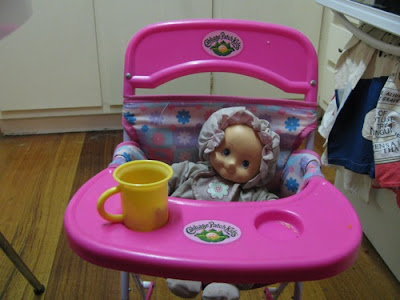 I heard someone recently say that it is no sacrifice to have children.  I understand.  "Sacrifice" makes children sound like they are a burden.  Yet having children does mean giving up.  I have childless friends who do a lot more travel and eating out than me.  They seem to have more freedom to uproot and change jobs or town.  Saying that having children is no sacrifice suggests we can have it all.  We can't.  Life is about choices, about decisions, about the road not taken.

Having children means filling the house with their paraphernalia, taking 25 minutes to walk a couple of blocks, standing in the supermarket with a crying child.  This week when I got the car serviced, Sylvia crawled across the garage floor where the mechanics work.  You wouldn't want to see her knees after that!  I had to laugh.  It is all about perspective.  Our house is crowded with Dolly's pram, highchair, cot, supermarket trolley, pens, playdough, lego, dollies etc.  It might horrify some who value a spotless house but it fills the place with color and life.  Walking so slowing along the road is frustrating but it also makes me take time to chat to Sylvia, notice my surroundings and smile at old ladies who think Sylvia is a doll.  Even having a crying child reminds me that I am the one she turns to when she is upset.  Having children is a sacrifice.  Yet is it a sacrifice worth making. 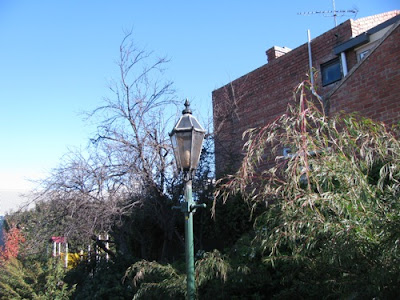 Maybe it would be better to say having children means change.  Huge change.  Evenings disappear in a haze of eat-your-dinner, baths, stories and songs.  I spend more time at the park and less on my bike.  Even the food I prepare has changed.

It is very odd to be responsible for the food of someone who has different tastes.  I've never cooked eggs in my life because I don't like them.  Recently Sylvia has developed a love of boiled eggs.  Preparing boiling eggs has never been a basic skill for me.  Now I am learning how to get the yolk hard for Sylvia.  I am no fan of carob but Sylvia seems to like it.  She took a shine to my neighbour's gluten free carob cookies so I asked for the recipe.  So you can thank Paula for the post but don't blame her for all my waffle! 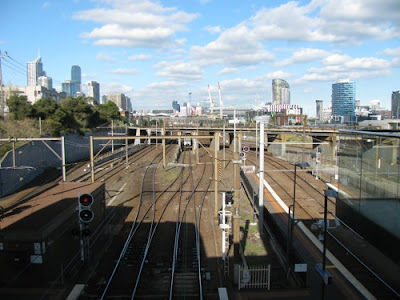 We took the cookies on a trip to Scienceworks a few weeks back.  I was ignorant of a huge new dinosaurs exhibition that had recently opened.  We stood in the long line for about 5 minutes.  It hardly moved so we left.  (If only we had bought online tickets we could have walked straight in.)  When we had set out, all Sylvia had wanted was to go to the park.  We were travelling by train so we stopped at North Melbourne station, watched some trains, went to the park and then had lunch at a cafe.  Sylvia was delighted. 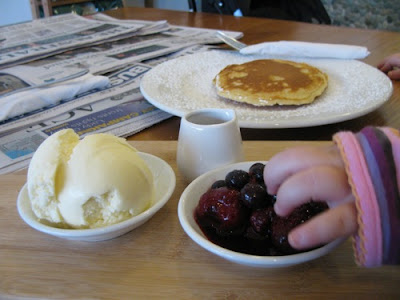 At the cafe I was reminded about our similarities and differences.  I can understand that she doesn't think ice cream is the bees knees.  I don't get her enjoyment of eating a plain pancakes and ignoring the icecream and berries that were specially served on the side for her.  The cafe was Tramezzini but it sometimes feels unfair to write up a visit separately when it is so coloured by my experience with Sylvia.  I can say that the staff were friendly and my Croque Mademoiselle of leek, mushrooms and gruyere on toast was quite good. 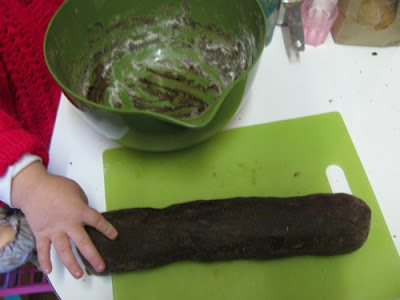 When eating out, Sylvia turns into a carbitarian.  I often try to balance these stodgy foods with food that broaden her intake of nutrients.  So I was quite pleased that she had one or two of these carob bikkies as well as her pancake.  Not only do the biscuits have carob but also a lot of quinoa flour, which is a complete protein. 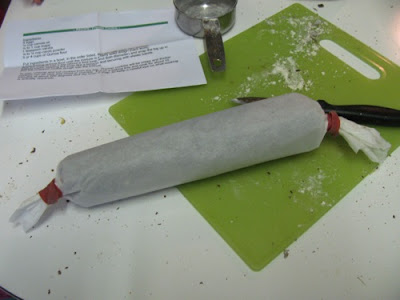 The biscuits are easy to make and if they are only made for one (as in Sylvia's case), they are easy to pop some in the freezer and slice up a few to bake every now and again.  Neither E nor myself gets very excited about them but Sylvia loves them.  They are not overly sweet and have some  health benefits so I don't get too concerned about her eating them.  In fact I am sending them to Amy from Simply Sugar and Gluten Free who holds a weekly event called Slightly Indulgent Tuesdays. 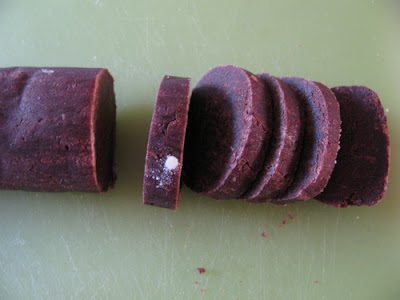 Lastly I wanted to return to the ideas of choice that I touched on with discussing children and sacrifice.  Sylvia has become a lot fussier about eating her vegetables (and often her dinner altogether).  Sometimes she will want a biscuit so I tell her that she can have a bikkie if she eats her broccoli (or tomato or carrot or sausage etc).  I don't insist she cleans her plate completely but I do say she has to have some of her vegies.  Occasionally I worry I am falling into the bad habit of bribing that I have read about.  However on my better days I think this is a way to teach her that life is about making choices.  After all if she can insist we listen to the Moody Blues, surely I can ask something of her too!

Previously on Green Gourmet Giraffe:
This time last year: Nutella Blondies
This time two years ago: SHF Apricot sponge – by any other name
This time three years ago: Pumpkin soup and history
This time four years ago: Isa's Pizza - from disaster to delicious

Put ingredients into a mixing bowl, mixing after each addition.  I took Paula's advice and added the flour gradually and stopped when I had a stiff dough.  She says hers is so stiff she can hardly stir it but I stopped when it came into a firm ball.

Roll dough into a log about 1 foot long and 8cm in diameter.  Cut slices of about 0.5cm - or a bit thinner if you like them crispy.  (Thicker are more moist.)  Paula says it is easier to cut them once they have been in the freezer but I didn't find them too difficult when room temperature., though it is useful to cook only a few at a time.  To freeze the dough, wrap log in baking paper and secure each end using a rubber band.  Biscuits can be cut and cooked with frozen dough (ie you do not need to bring it to room temperature).

Bake at 200g for about 10 minutes.  They will look dry when cooked but there isn't too much to give away if they are cooked because the dough is so dark but I don't think it matters too much as long as you don't leave them in too long.  Cool on the tray or on a wire rack.

On the Stereo:
The Bestiality of - The bonzo dog doo-dah band
Posted by Johanna GGG at 16:45