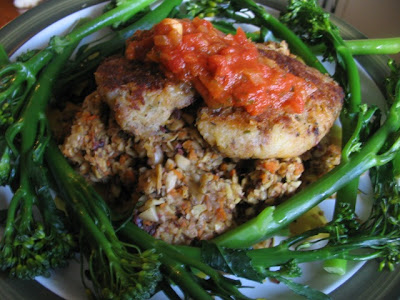 When I lived in Edinburgh, I learnt that we had our Scottish friends to thank for New Year’s Eve which in Scotland is called Hogmanay. E (a true Scotman) still thinks it is uncivilised not to get a holiday on 2 January in Melbourne like he would at home – there’ll be no lump of coal for his employer! So to mark a Scottish celebration, it seems only right that we eat a Scottish dish.

I’d never eaten haggis before I went to Scotland. The closest I had come to it in Melbourne was at the wedding of my friends Jane and Andrew, where Rabbie Burns ‘Address to a Haggis’ was recited in a fine Scottish brogue before the haggis was ceremonially served with a lovely home 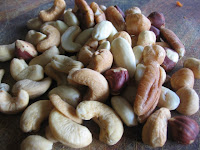 made atholl brose (but I was vegetarian by then and can’t remember what I had instead of haggis). In Scotland I found that the haggis still roams the hills (or so the tourguides would have you believe). Well maybe the wild haggis herds are a myth but it was certainly easy to find both meat and vegetarian haggis in pubs and delicatessens.

So I can’t compare vegetarian haggis to meat haggis but I can tell you the former is absolutely delicious. It is a bit like a nutloaf with finely chopped and lightly fried oats, nuts, vegetables and beans - just as tasty but more crumbly and chunky. A great way to use up leftover scraps. The oaty nutty aromas makes me think of of home-cooking around a dark fireplace in a crofter's cottage. Apparently it was originally humble peasant fare. The peasants would have laughed at the vegetarian version – but I don’t envy anyone eating sheep’s stomach and offal. The vegetarian haggis is substantial,

After leaving Scotland I couldn’t find haggis for love or money in Melbourne, and then I came across a recipe on the internet. It wasn’t that hard to make, and tasted like just McSween’s vegetarian haggis (here's proof how good the vegetarian version is - originally intended as a PR stunt and now their vegetarian haggis accounts for 20-25% of their business). The recipe even amused me with instructions to add “1 tbsp whisky or more”. I have found a few different recipes on the net so next year I might try a few other flavours next year which feature in other recipes – such as barley or nutmeg.

Now, much as I love haggis, I have found it a challenge to present it. Traditionally, haggis is served with bashet neeps and mashet tatties (mashed swedes and mashed potatoes). But haggis 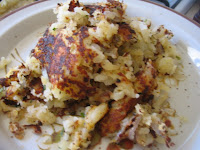 isn’t an attractive dish – it looks like a loaf as it comes out of the loaf tin and then collapsed into mince-like crumbs at the touch of a fork. Mashed tatties and neeps don’t really don’t excite me and they just look so dull and colourless. I have dug out a photo (above) of 2006 New Year’s Eve to demonstrate how it looks.

This year I decided to serve it with potato and swede rosti – felt like a good compromise – after all, surely if the Scots had thought of frying their mashed vegies they would leap at the idea. However, luck was not with me as the rosti kept sticking to the frypan as I followed the recipe rather than my instinct. Unfortunately, the internet was on slow go so I couldn’t check my notes 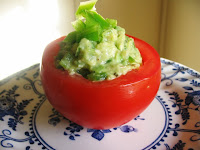 on the similar mock fish I made earlier in the year. Finally I had some almost presentable pieces of rosti to serve, and a pile of rosti crumbs (see photo) that we will eat with leftover haggis tonight. I also steamed some broccolini to give the dish some colour and freshness which worked well.

I decided it needed a sauce. My inclination was gravy or a sauce of onions, cream and whiskey. E wanted tomato sauce. When I thought of how he always drowns his haggis in tomato sauce, I thought it was a fair request. I found a Cinnamon Tomato Sauce recipe in the Café Flora Cookbook. It was one of the highlights of 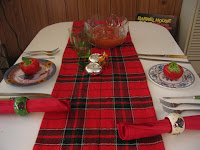 the meal. The cinnamon was subtle and fragrant but added a festive intensity. I know they say haggis should also be served with copious whiskey but we don't go through much whiskey in our place - our current bottle which is almost finished is almost 2 years old!

I also did a starter because I found one that seemed light and interesting – tomatoes stuffed with guacamole. I liked the festive green and red and it was a pleasing wee taster before the main event. I’d recommend this as a Christmas day starter for vegetarians. My avocado was not so good so the guacamole had a lot more green capsicum than avocado but 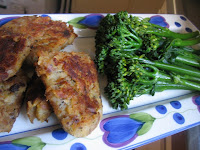 was still good, maybe better for it. At first E described it uncertainly as interesting and different but he came around to finding it quite palatable.

Here is the menu:

To Drink: Apricot and Strawberry Punch

That’s six recipes which is a lot of work! One of the major challenges was cooking in 42 C heat. Youch! This is the sort of heat that makes concrete too hot to walk on barefoot, that burns the 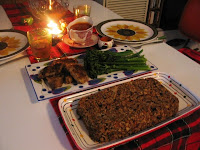 leaves of plants and saps you of any energy. Our poor pussy cat spent the day lying stretched out on the floor like she’d melted into a little puddle.

When I saw the forecast I decided there was no way I was going to turn the oven on in that weather. Luckily the weather was cooler (30 C) the previous day so I baked the haggis that night, and reheated it in the microwave. I also made the chocolate sauce the night before and the tomato sauce during the day. Everything else was fairly straightforward – apart from the recalcitrant rosti – and it was just a matter of finding enough workspace amid all the dishes and dirty saucepans (see photo in previous post). Today it is 40 C and I am delighted to have lots of lovely fruit to graze on and leftovers that I can easily heat for dinner.

Update: January 2009 - I have now found the best way to serve it is haggis nachos and used the leftovers for haggis neeps and tatties pasties, and haggis neeps and tatties crepe stack. I highly recommend any of these ways of serving haggis and you can find what I did at this post.
Further update: January 2014 - I have written a post called how to serve haggis to showcase some of the ways I have served it.

Tomatoes stuffed with Guacamole
(adapted from Cooking with Cranks)
Serves 2

- 2 medium tomatoes
- ½ avocado*, mashed
- 1 garlic clove, crushed
- squeeze of lemon juice, to taste (I did a tbsp I think but could have done with less)
- ⅓ green pepper*, finely chopped, plus extra for garnish
- ¼ tsp pepper
- pinch salt
- few drops Tabasco sauce
(* the recipe instructs to add 1 avocado and 1 tbsp capsicum, but I used what I had and it was good - so you can be fairly flexible with these amounts)

Cut the tops off the tomato and scoop out the flesh and seeds (the recipe says you can do this using a teaspoon but I needed a sharp knife!) Turn the tomatoes upside down to drain while you prepare the guacamole.

To make the guacamole, mix all the ingredients. You can make any guacamole recipe here – I just made one with what I had to hand but the recipe suggests using finely chopped celery, yoghurt and parsley.

Melt half the margarine and cook oats, oatmeal and nuts for about 3 minutes over medium heat in a large frypan. Transfer to a large bowl

Finely chop carrot, onion, mushroom, and beans. It is easiest to use a food processor so the mixture is very fine. Melt remaining margarine in the frypan and fry the vegetables and beans for about 2 minutes. Return oats and nut mixture to the frypan with the vegetable mixture. Mix in the remaining ingredients and cook another 5 minutes.

Place in a greased and lined loaf tin – I used my 13 x 22cm silicone loaf pan (and found my mum was right in advising I didn’t need to grease it). Press down and smooth with the back of a spoon. Cook 40 minutes in a moderate oven. I cooked mine 30 minutes and cooled in the pan. I reheated it in the pan in the microwave the next night – it is quite fragile and this was the best way of keeping it together.

You can leave out the suet, but the recipe warns it might get dry and need some vegetable stock – but I found that it was moist enough with only 20g extra butter.

Update 2013: more idea on how to serve haggis or check out these New Year's menu suggestions (mostly haggis)

Heat oil in a medium to large saucepan and fry onion over low heat til soft and translucent (I found that I only did it about 5 minutes because the onion started to stick to the bottom of the pan). Add garlic, cinnamon and cloves. Stir over low heat about 1 minute, stirring constantly.

Add wine and stir a few minutes til most of wine is evaporated. (The recipe says to deglaze pan which I think means to clean the pan of all the cooked bits which have started to stick to the bottom.)

Add remaining ingredients. Bring to the boil and then reduce heat. Cover and simmer gently about 30 minutes.

500g potatoes (about 4 medium/fist sized potatoes)
300g turnip* (1 medium)
½ red onion, finely chopped
1 tbsp fresh parley, chopped (or more)
½ tsp salt
½ tsp ground pepper
40g butter
2 tsp oil
* I got to know and love these turnips in Scotland so they are always turnips to me but in Australia they are known as swedes and in USA they are known as rutabagas.

Peel potatoes and turnip. Cut turnip into a few small chunks the size of potatoes. Place in saucepan with a few inches of boiling water. Cover and bring to boil. Simmer about 15 minutes til just soft. Run under cold water. If you have time, it will help if they can sit for 30 minutes.

Heat half the oil and butter in a large frypan. Tip the mixture in – the recipe says don’t press down but I disagree. It also advises to cover and leave 10 minutes. Foolishly I followed these instructions. Number one mistake was having too much mixture (once I had scraped out half the mixture it was much easier to manage) and the other mistake was that I didn’t constantly shake the pan and push an eggflip or spatula under it to make sure it was not sticking. It did not help me to cover it. And when I tried to flip it onto a plate and slide it back onto the frypan it was a disaster. Finally when I had less mixture, I cut the round flat rosti into four corners and found it much more manageable. Needless to say I took a lot longer than the 10 minutes they suggested. But I hope to try it again with more success as it is potentially a good side dish.

On the stereo:The Best of Jethro Tull: Jethro Tull
Posted by Johanna GGG at 21:13